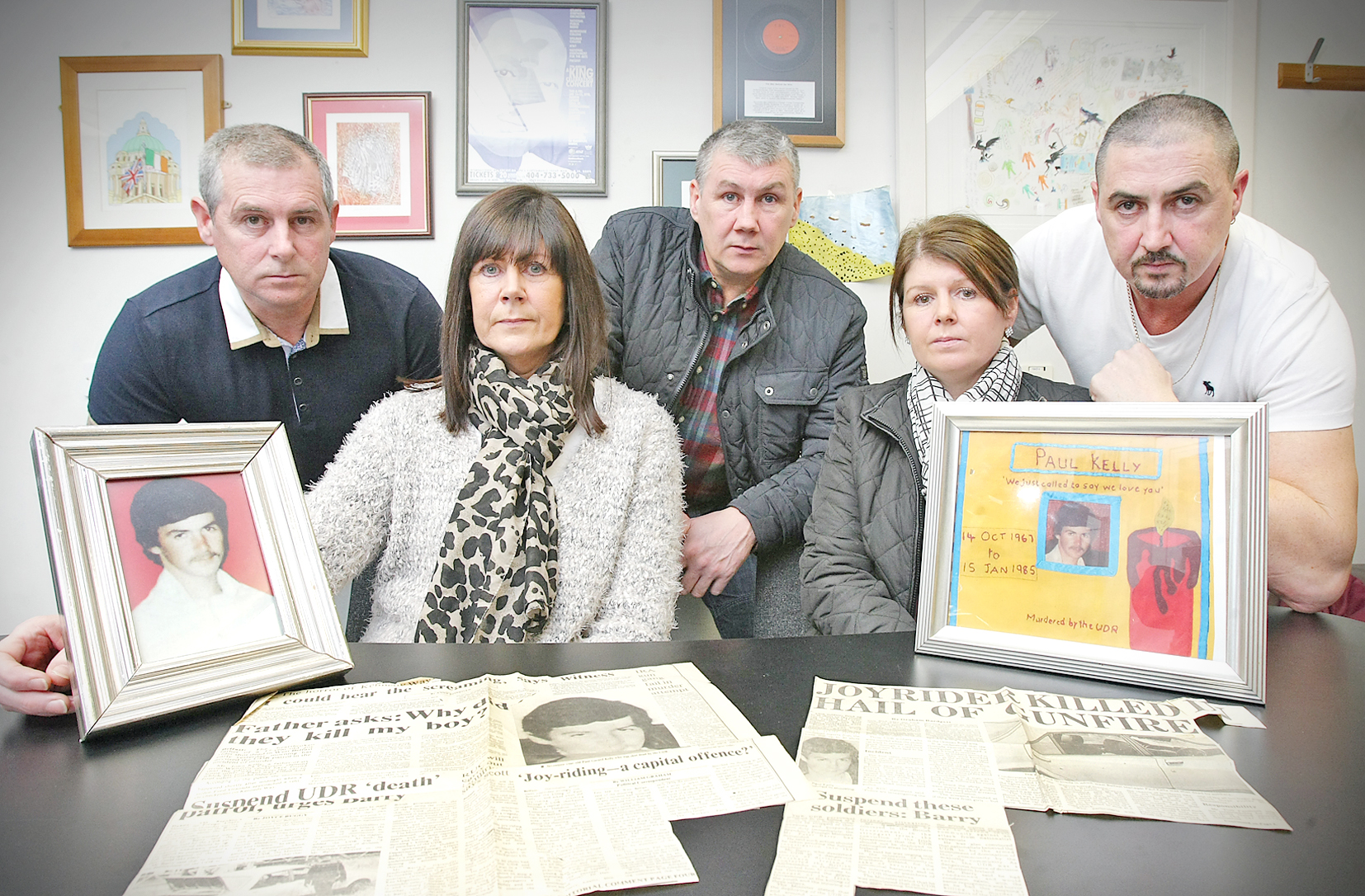 A West Belfast family are calling for a fresh inquest into the death of their brother as they prepare to mark the 30th anniversary of his killing today (Thursday).
17-year-old Paul ‘Kelso’ Kelly from Whiterock Gardens was shot dead by the UDR while travelling in a stolen car along with four others. The vehicle failed to stop at a UDR checkpoint set up on Kennedy Way on January 15, 1985.
At the time Paul’s death provoked a cross-border storm when the then Irish Foreign Affairs Minister, Peter Barry, expressed “grave concern” to the British government, stating that he found the deployment of the notorious UDR in and around West Belfast incomprehen-sible.
At Paul’s inquest his family heard that he was found to have suffered around 50 wounds from bullet fragments to his upper back and torso. However, despite extensive forensic tests at the time, it wasn’t revealed how many times Paul had been shot or which member of the patrol had fired the fatal rounds.
Paul’s brother, Patrick, told the Andersonstown News that when their father tried to take the case to the European Court in 1986 it was thrown out, he believes because “anybody living in West Belfast at that time was deemed an IRA supporter and was put down as a terrorist”.
“The family remains angry that after 30 years we have had no answers about the death of Paul,” said Patrick. “The way Paul was killed was nothing short of brutal force, there would be such a public uproar if this was to happen now.

Questions
“As a family we want to push forward for a fresh inquest. Before there was nothing and basically one of the questions we want answered is, why was the UDR involved?”
The Kelly family believe that information was passed from the police to the UDR during that fateful night informing them that the stolen car, which had been taken from a home in Donegall Pass, was heading to West Belfast. The family said that reports circulated at the time that the group had stolen a policeman’s car were untrue.
Paul’s sisters, Ann and Maria, were both six months pregnant at the time of his death. Ann described her brother, a St Thomas’ pupil, as “a lovely person.” She went on: “Paul was quiet, he loved his music and took care of his appearance. He would have sat for hours in front of the mirror making sure every hair was in place.
“The family are planning to unveil a plaque in memory of Paul, to mark his 30th anniversary, close to the scene where he died, just under the bridge at Kennedy Way. We can’t believe it’s 30 years. Everybody knew Paul, and those who knew him and the wider community are welcome to come on Thursday.”

Soldiers
Relatives for Justice Chairperson Clara O’Reilly will be speaking at the plaque unveiling. Clara said the record needs to be set straight in relation to Paul Kelly’s death.
“At the time of Paul’s killing the car should have been demobilised, made safe, and an effective arrest made within the rule of law,” she said. “These were supposedly highly trained soldiers operating in a civilianised area. The UDR came exclusively from one section of the community and was notoriously sectarian. They knew full rightly what had taken place and the reality was no threat existed.
“These were young teenagers. Even if there had been the threat which they falsely claimed, the nature of how they acted and behaved demonstrated that a clear policy of shoot-to-kill existed.
“The UDR were given arms and came into a community with a particular view. If they weren’t standing in a uniform to kill Catholics they were colluding with loyalists to kill Catholics – there was no sense of upholding or applying the rule of law. The night Paul Kelly was killed he should have been arrested and faced due process in a court – not a summary execution in the street. This wouldn’t have happened in East Belfast, the Shankill or Shore Road and we will continue to work with and support the family.”
The Kelly family have appealed for any people who may have been in the Kennedy Way/Stockman’s area the night Paul was killed to come forward. If anyone has any information they should contact Relatives for Justice’s casework team members Mike Ritchie or Paul Butler on 02890 627171.
The plaque unveiling for Paul will take at 1pm today (Thursday). All are welcome to attend.