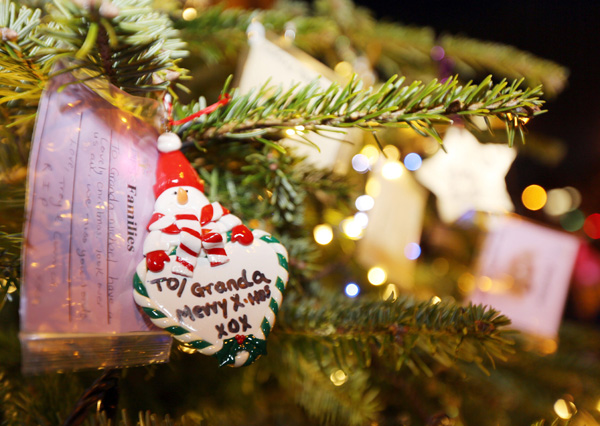 As PIPS families held the annual 'Tree of Life' ceremony, plans for the future were being outlined by its board

The Chairman of PIPS says they’re moving towards working more strategically as efforts are made to put the charity on a more secure financial footing.

Formed by Philip McTaggart in 2003 in the midst of a suicide crisis and named after his late son Phillip, the charity has been at the forefront of fighting back against the rising number of people taking their own lives.

However, Joe O’Donnell says they want to move towards looking at the problem more strategically and 2016 has been a year of consolidation and future planning for the charity on an organisational level.

“Our clients have increased dramatically over the past year and there have many changes regarding issues and gender,” said Joe.

“The mission statement of PIPS has been, is and always will be ‘Saving Lives’ and we have a number of things happening in the New Year in terms of outreach work across the city that will help us expand that service.

“For a long time, and people might not have realised it, there was a sense of insecurity around PIPS’ work.

“PIPS isn’t funded and that’s a very important point. We are donation-dependent and survive through internal fundraising and working with other groups who help us. It’s very difficult. We also never owned our premises. That was always leased but we have now bought PIPS house and taken on a mortgage so we have ownership which certainly provides a level of confidence to the staff and organisation.”

Money raised over the year has been invested into the renovated PIPS house, added Joe.

“We have partially renovated the residence and we have roughly another £4,000 we are going to invest and we really want to make the facility fit for purpose for the client who comes in the door and the staff who deliver the services we provide.”

Changes have also been seen with staffing. Former Chief Executive Brian Maguire left the organisation recently but Joe said it was natural that any organisation has staff turnover.

“As an organisation we are like any other and there are always staff changes. We had brought in a Chief Executive who was in place up until quite recently. That didn’t work out. In any organisation people will come through the doors, be there for a certain amount of time and then move off again. There’s no hidden story. There were discussions around how PIPS was moving forward and we’ve changed some staff but we will be recruiting a new Chief Executive moving forward.”

Joe says they have a strong staff and have taken on more trained volunteers.

“We have six counsellors and befrienders from ethnic minorities and currently have 42 volunteers working with PIPS – 11 third-year students, 18 second-year students and four befrienders. It’s an extensive amount of staff and they allow us to deliver our services.”

The PIPS office will be open with counsellors and befrienders on hand December 28, 29 and 30 from 9am to 9pm and Saturday December 31 from 2pm to 6pm.