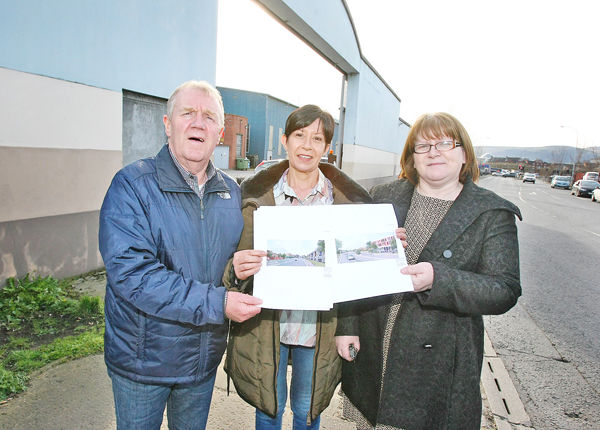 Launching the ‘Short Strand Vision’ on behalf of the Short Strand Partnership, Cllr O'Donnell said: "It is very exciting to finally see on paper these plans which aim to develop the bus depot site to help address the housing need in the area and provide a much needed improved youth facility.

“I believe that Translink first indicated their intention to relocate this depot around 15 years ago.

“Sinn Féin has consistently raised the issue with both Translink and successive DRD Ministers and just a few months ago we invited Minister Chris Hazard to view the site for himself.”

Cllr O’Donnell also said that the depot is nothing more than an overnight garage with buses being locked there at the end of the day, then driven through the Short Strand in the early hours of the morning, causing a nuisance to local residents. She said that various studies have shown that there is a significant health risk associated with having the depot right in the middle of a residential community.

“Now the community, through the Short Strand Partnership and St Matthew’s Housing Association, has come up with its own vision of what the site could provide for the area.

“Add to this the prospect of the Sirocco site being developed and I feel that the future for the Short Strand community is very exciting indeed,” said Cllr O’Donnell.

“We plan to hold a public consultation for the local community in the coming weeks and would urge as many residents as possible to attend.”

A Translink spokesperson said that they had no plans to relocate from their current location in Short Strand.