Plenty to work on ahead of League: O’Mullan 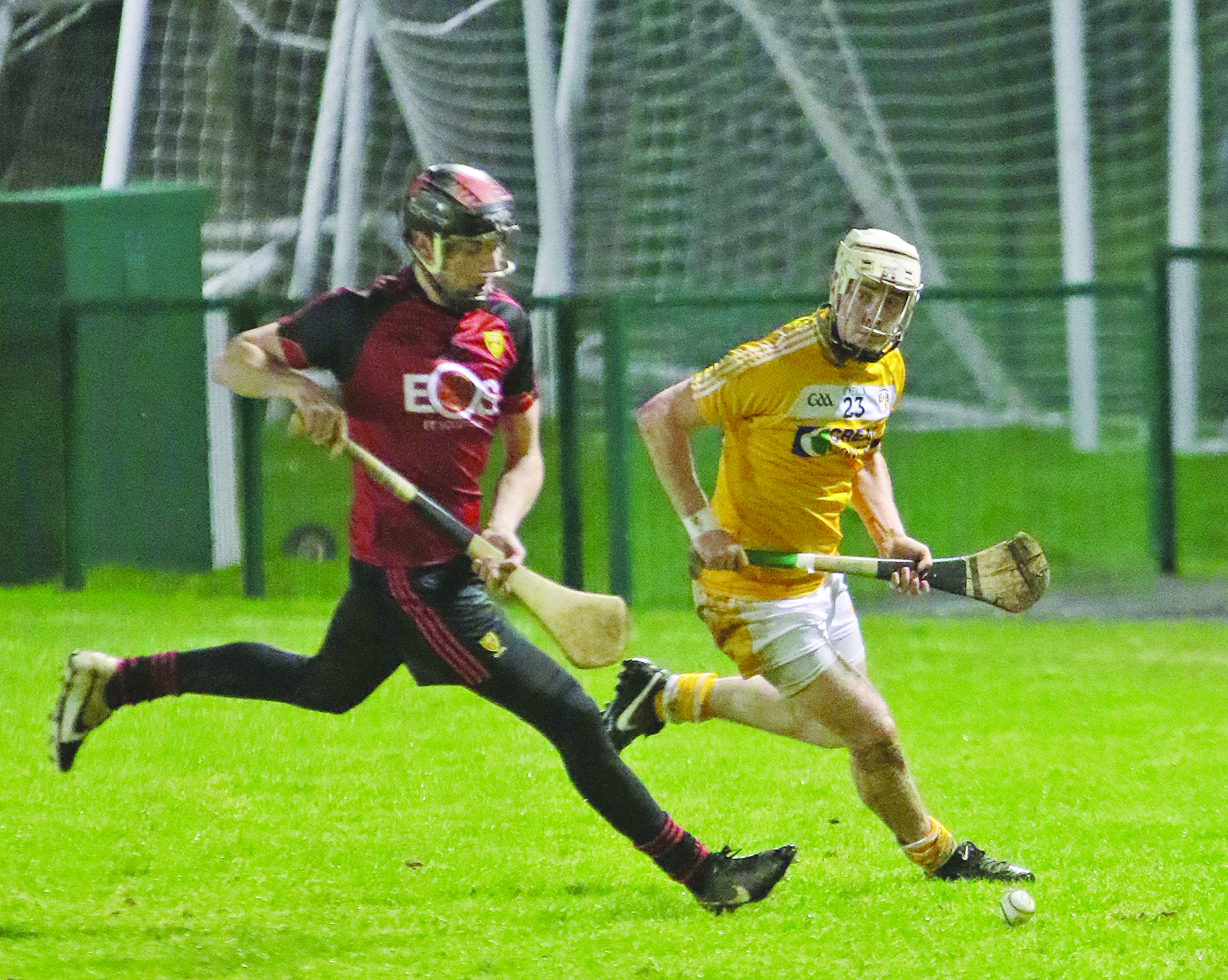 PLAYING below par yet still winning is a sign of promise and Antrim manager, PJ O’Mullan says he will take the positives following his side’s five point victory over Down in the Conor McGurk Cup final on Saturday evening. The Saffrons really only hit top gear for a 15 minute spell prior to half-time but did enough during this time to build a match-winning lead as Down misfired in front of the posts. “It’s good for the players to get silverware,” said O’Mullan after. “It’s pre-season and we have been training really hard. “Credit to Down, I thought they were very good, but a win’s a win. At the end of the day, the result wasn’t really that important, but tonight was about getting us another game on grass because we haven’t been training on it. That was the important thing really and we got 70 minutes there tonight.” The conditions were far from ideal with the multi-sport pitch having been churned up with the help of heavy rainfall, but O’Mullan refused to use this as an explanation as to why Antrim didn’t really take this game by the scruff of the neck, especially in the second half. “In conditions like that, it’s hard to play,” he offered. “I’m not making excuses because we weren’t good and the players will be the first to admit that, but we will look at it and move on. “That was our seventh game in 20 days as-well-as going Tuesdays, Wednesdays and Thursdays (training). “We were slow at getting training started just because of the nature of the appointment of the management team. We are a month behind and are trying to cram it all in so hopefully come Valentine’s Day (league opener) we will have it crammed in.” Down boss, Michael Johnston was delighted with how his young side acquitted themselves as they grew in confidence throughout the game, but poor shooting proved to be their undoing. With a number of household names missing, Down’s young guns could have folded, but they upped their game in the second period and played it on their terms for spells – something the St John’s clubman says they can take into their League campaign. “The boys are disappointed because they lost, but it's an eye-opener for what we need to do and a good run out in pre-season,” said the Down boss. “We know where we went wrong - hitting all those wides so we have things to work on, but we're happy. “We know where we are in the pecking order and we know we have the hurlers - we just need to get the performances now. “But we were delighted with the game, especially with the team we put out and were missing 11 players who started in Christy Ring last year. “We are on our own journey now and that starts on February and hopefully ends on March 24 with a League final.” Bolster While Down were missing a number of players, Antrim were also without their Creggan and Cushendall contingent who will bolster the squad further, as will the addition of highly-rated Ballycastle forward, Saul McCaughan who has joined the panel. The Antrim management team has given game-time to a big number of players in January, but will need to cut the squad ahead of the National League that begins with a trip to Derry on February 14. “We have players in at the minute and we are going to have to let a few go,” accepted O’Mullan. “It’s sad because they are great people and we have got to know them, but that’s the nature of the game. You can only carry a certain amount of people in the panel. “Hopefully we get the right people and those we let go, hopefully they will go away and work because it’s not personal, just something that has to be done. “We have been working to get all of our best players in and we have most of them there. It’s a good squad with good people do we would be hoping we can pick a good squad going forward. “You need to be carrying big panels as you can see because you pick up injuries.” Antrim will continue their preparations for the League this weekend with a trip south and O’Mullan says they have a lot to work on after the Down game if they are to hit the ground running in their quest for promotion back up to 1B. “That (performance) wouldn’t be acceptable going forward, but look, we trained hard this week and maybe they were a wee bit tired going into it,” explained the Loughgiel All-Ireland-winning boss. “No excuses though as Down were probably the better team there, but you would be happy to come away with a win having played like that. “It’s a learning curve. This was a derby and they can be feisty. “There were positives so if we can eradicate the negatives because if we go to Derry and play like that, they will eat us, so that's something we have to look at and we will look at it.”