Police launch investigation into suspicious death of May Stevens 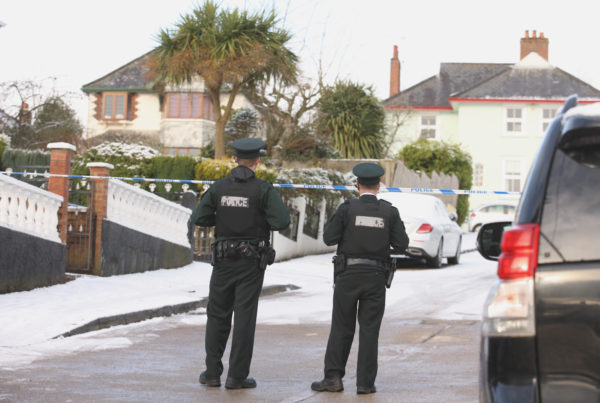 POLICE are investigating a potential burglary link to death of a 64-year-old woman who was found dead in her North Belfast home on Sunday morning.

PSNI officers discovered the body of 64-year-old May Stevens at her house in Lismoyne Park shortly after 3.00am. Officers visited her property to inquire about her vehicle, which had failed to stop for police on the nearby North Circular Road.

Detective Chief Inspector Peter Montgomery said that Mrs Stevens’ death was being treated as “suspicious” and issued an appeal for information.

“We now know that her car was stolen between 1.30am and 2am on Sunday before in was found abandoned in Glenbank Place at around 6.45am,” he said.

“I am keen to trace the movement of the car, a red Hyundai I30, bearing registration plates NRZ 3370, in North Belfast between 1.30am and 6.45am. The vehicle has damage to its nearside.

“I would also like to speak to anyone who has information about two men who were seen walking away from the car after it was abandoned in Glenbank Place in the direction of the Crumlin Road.

“I am investigating a possible link to two other attempted burglaries in the area in the early hours of Sunday morning – one of which was in Lismoyne Park.

“I can fully understand the shock and devastation felt in the community today following this sickening incident.”

Mrs Stevens was last seen alive in her house late on Saturday evening.

The mother-of-two was a former Maths teacher at Boys’ Model in Belfast and Newtonabbey Regional College.

DCI Montgomery said that Mrs Stevens was a “long standing public servant” who had “touched the lives of many”.

“This incident has left the Stevens’ family mourning the loss of a wife, mother and sister,” he said.

“Mrs Stevens was looking forward to becoming a grandmother.

“We understand the effect that burglary can have on its victims and want to reassure the community that we are undertaking thorough and robust investigations into these crimes.

“I am appealing for anyone who has any information about this incident to contact detectives in Musgrave Street on 101 Ext 17019, alternatively, information can also be provided about either incident to the independent charity Crimestoppers on 0800 555 111 which is 100% anonymous and gives people the power to speak up and stop crime.”

Sinn Féin North Belfast MLA Gerry Kelly expressed his condolences for Mrs Stevens’ family and urged the public to assist the police in their investigations.

“My thoughts are first and foremost with the family of May Stevens who died suddenly in her home in Lismoyne Park,” he said.

“This is a terrible tragedy and a great loss for her family.

“The people of north Belfast are stunned as news of this awful incident have emerged.

“I have been in contact with the PSNI directly on this case and I would appeal anyone who saw anything suspicious to contact the police.

“Incidents like this leave our elderly people feeling very vulnerable and I would appeal to those with elderly neighbours to check in on them in order to provide some reassurance at this particularly concerning time.”