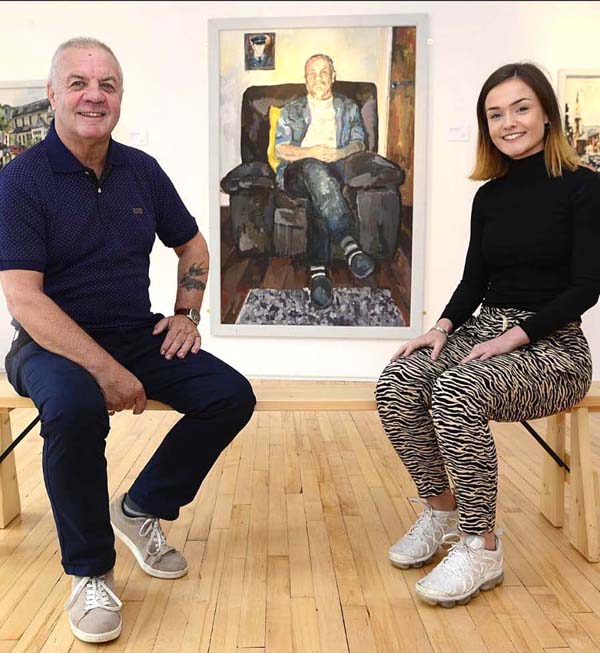 A PORTRAIT of a local victims campaigner has gone on display as part of an exhibition by an artist who believes he embodies the true spirit of the north.
The painting of Raymond McCord is among 30 by artist Shauna Fox that have gone on display at the exhibition in the Sea Holly Gallery in Hill Street.
Shauna (21) was born in Bangor but is now based in London, where she is studying fine art painting at Camberwell College of Arts. She makes paintings, sculptures and installations related to being a woman in 21st century Britain and, more recently, issues related to the north.
Shaunw asked her father to pick someone for a portrait who he believes unites communities here. His answer was Newtownabbey man Raymond, who became well-known for his work as a victims campaigner after his son, Raymond Jnr, was murdered by the UVF in 1997.
Shauna explained: “Raymond McCord is a victims’ campaigner and he’s a man I’ve always admired – an archetypal Ulster man, brave, unrelenting and he believes that the only way we can deal with the past and move forward is if both communities deal with it together.
“My work focuses a lot on ethical issues and human rights. I have explored the destruction of Aleppo by barrel bombs, the oppression of women in relation to honour and sacrifice and the Troubles in Belfast.
“I studied Ethics at school and from there I became interested in humanitarian and ethical issues. I knew my peers knew little of the atrocities, injustices and inhumanity being carried out at home and abroad on a daily basis and so I based my artwork around these issues in an attempt to raise awareness and present my thoughts, views and responses to them in an innovative and stimulating way.
“This body of work is mainly based on my experience of living in Northern Ireland for 18 years, moving to London and then looking at it from afar. Moving away has made me interested in finding out more about where I’m from, but the more I discover about where I’m from, the more I question whether it’s somewhere I can be proud of and want to live in again.”
Raymond said he was “honoured” to be featured in the exhibition.
“It is an honour to have a portrait done. I never ever dreamt something like this would happen to me. Unbelievable. I can't thank the artist enough.
“The portrait itself will be dedicated to my son young Raymond and the rest of the innocent victims and in particular to the many from North Belfast. This is for all of us in both communities.”
Shauna’s exhibition runs until August 31 at the Sea Holly Gallery in Hill Street.