Priest was cut down going to aid of others 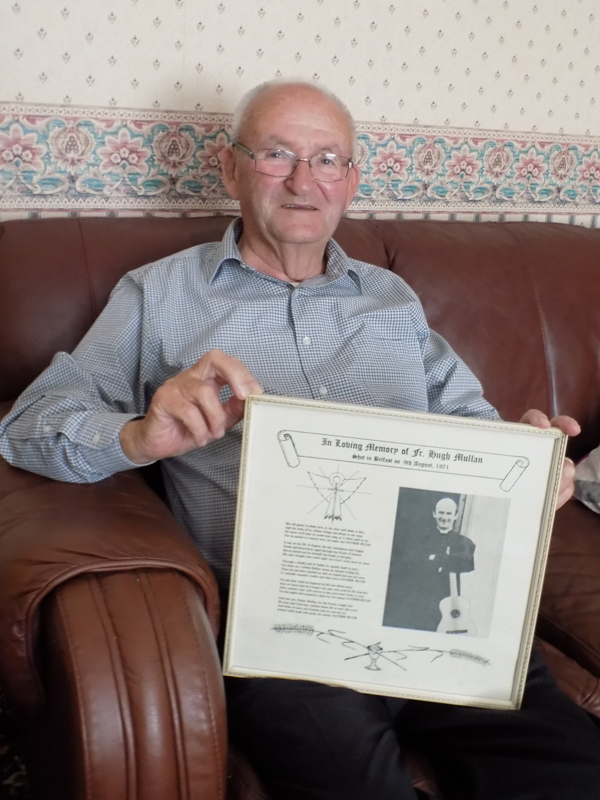 Father Hugh Mullan was a curate at Corpus Christi Church. The Portaferry man was shot dead as he went to the aid of his neighbour Bobby Clarke during the Ballymurphy Massacre.

Before entering a field on August 9 in an attempt to help Mr Clarke, Father Mullan telephoned the Henry Taggart Army base to explain that he was going to help the wounded man, he entered the field waving a white cloth. As he attempted to leave the field after anointing Mr Clarke, Father Mullan was shot in the back. The fatal shot came from a soldier in the British Army’s Parachute regiment, who was situated at the top of flats in Springmartin.

Eyewitnesses said Father Mullan could be heard praying, as he lay dying on the ground, he was 38-years old.

The Andersonstown News travelled to Portaferry this week to meet with Father Mullan’s brother Patsy.

Describing their young lives Patsy said: “There were four of us growing up, one girl and us three boys. We were all born and raised in Portaferry.

“Hugh went to St Mary’s Grammar school in Barrack Street in Belfast, he travelled up and down every day. Then he did one year at sea. We all went to sea on ships in the Merchant Navy. I don’t know what happened to him but on his last trip to New York, he must have seen something, because he came back and said to my mother that he wanted to be a priest.

“She told him to think about it first, but to go and speak with our local priest Canon Murphy. So that’s what he did, Canon Murphy advised him to go to Queen’s University and get his degree, then if he still wanted to be a priest they could take it from there.

“So off he went from Queens, to Maynooth, where he trained as a priest for five years.”

Patsy continued: “It takes money to become a priest and we were just ordinary working people, so Hugh went to Luton and worked in Vauxhall motor works during his holidays to get money for his future.

“My mother adored her son being a priest, my parents were very proud of him as were we.”

Patsy said that his brother was always a very caring person who would always help out people in need.

He said: “When Hugh was young he was a very good swimmer. One day a young fella who was only five fell into the water here, the tide was very strong. Hugh was a very good swimmer, he ran straight down and jumped into the water, he swam to the boy. I could see the top of the boys head, he was about to go under, my brother got to him and brought him back to the shore and resuscitated him, he is still alive to this day and lives just up the road.

“A few years back a girl rang me here to the house, she explained that she was placed in Good Shepard Convent as a child, she had been abandoned. She told me that Hugh, who was the chaplin there would come in and play the guitar for all the children, he just loved people.”

Discussing their young days in Portaferry Patsy said: “I was only young and had just started going with Mary, who would become my wife. Hugh and I were both on our way to do our devotions this one Sunday night, afterwards he asked me where I was taking Mary and did I have enough money. I said the pictures and no, I had no money. He put his hand in his pocket and gave me the money to take her, he was so good natured.
“Hugh married us, it felt very special, not many people can say that. He baptised most of our children as well.

“Hugh didn’t care about money, when he died he had £11 to his name. Anyone who asked him for money got it, he could not say no. Other priests told him not to give away his money but he didn’t listen.”
Father Mullan was only in Ballymurphy for a short period but the people of the area were very fond of him and he of them.

“Hugh was only in Ballymurphy for around six months, he was an ordinary person, no airs and graces. He loved people and loved helping people, that’s all he ever wanted to do,” said Patsy.
“He also loved music and was in the choir, he played guitar and sang, he wasn’t a great singer but he tried his best.

“I remember when we first heard he was going to Ballymurphy, I mentioned it to him and he said ‘sure it’s great, the people there are dead on, they’re just like us’. I knew nothing about Ballymurphy myself.”

Describing how he found out about his brother’s death Patsy said: “We were meant to be going to see Hugh that particular day, myself and Mary were to bring my mother and father to Belfast but he rang and said ‘don’t be coming today, we are having problems here and I don’t want you coming’.

“We decided not to go when he mentioned there was trouble. I remember switching on the news and they were talking about rioting in Ballymurphy – it was about 6pm.

“When the news came on again later things were getting worse, there was shooting. I think it was ten o’clock that night and I was listening to RTÉ and they said that a priest had been shot. I just knew, I knew he would have been the one who would have been shot.”

Patsy continued: “My mother just lived up the street. I went to her and told her there was trouble up in Ballymurphy and Hughie had been hurt. I didn’t say he was dead, I knew he was shot but I didn’t know he was dead.

“I phoned up to Belfast to find out what was going on and they told me he was shot and that he was dead. This was about two in the morning.

“I had to get the local doctor to come down and tell my mother because I didn’t know how she was going to react to it.

“The doctor told her Hugh had died and there was nothing that could be done for him, she was desperate, my daddy was the same, everybody was just so upset.

“We never heard anything from the police or anybody, nobody told us anything.”

“We went to the funeral in Ballymurphy, the Bishop and the Cardinal were there, then he was brought home here to be buried. I remember the driver of the hearse raced down the road.”

Describing life after Father Mullan’s death Patsy said: “For a long time after I would have been on the bridge of a ship at sea and I would be thinking about him, I would sing the songs that he sung. It was between him, me, the sky and the sea.

“I always think about him, we had some good times.”

Patsy added: “When Hughie died they said he was a gunman. I saw a book written by two soldiers who said they were in Ballymurphy, claiming to have shot him. They said they saw him with a gun, nonsense. I want the record set straight. I want an apology.”