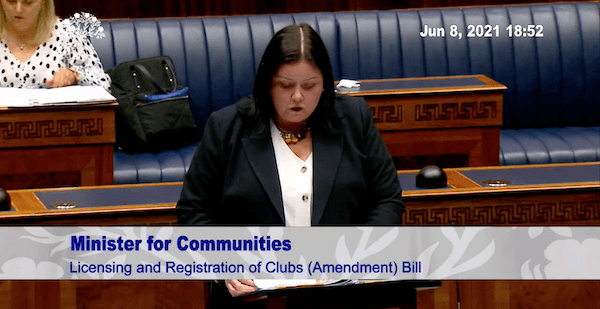 The South Belfast MLA described the proposed new liquor licensing laws as a “great move which brings our drinking laws into the 21st century”.

The reforms, which were debated in the Assembly on Tuesday, would allow pubs to open until 3am and remove restrictions on trading during the Easter period. The loss of trade over the Easter period – and Good Friday in particular – has long been a source of frustration for the hospitality industry.

If passed, the legislation would allow certain licensed premises, including member-owned social clubs, to extended their opening hours by one hour up to 104 times a year.

Smaller pubs would be able to extend the time for last orders up to 85 times a year.

The proposed reforms are in line with commitments set out in Stormont's New Decade, New Approach agreement.

Amongst the proposals were plans to introduce limits on where supermarkets can promote deals on alcohol sales in store, and would would also ban the use of loyalty schemes in off-licences.

Ms Hargey said her proposals aimed to strike a balance between supporting businesses and tackling harm caused by alcohol.

“The Bill contains a balanced package of reforms,” she said.

“While supporting the hospitality industry, it is my duty to also be mindful of the negative impact that the harmful consumption of alcohol can cause, to individuals and to whole communities.

“This Bill therefore also includes the relevant safeguards to ensure that people are protected from alcohol-related harms.

“I look forward to taking this Bill through its consideration stage and next stages in the coming weeks and to deliver on this much-anticipated reform.”