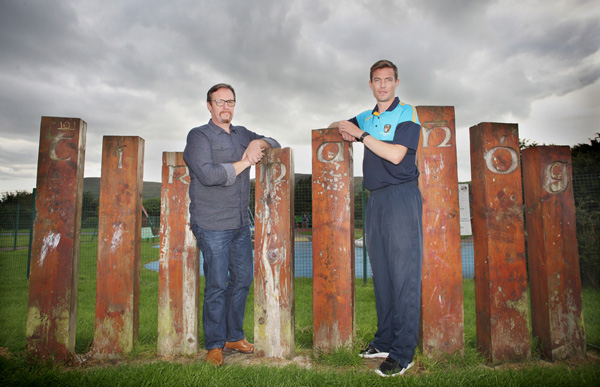 PLANS for a soccer facility adjacent to Tír na nÓg park in Ligoniel are being drawn up following a “positive” meeting on redevelopment of the area.

The plans include a soccer pitch with marked-out lines, goalposts and a net for the green space with a multi-use games arena (MUGA) part of the long-term vision.

Damien McCallin, Environment and Recreation Programme Co-Ordinator at Ligoniel Recreation Centre, said there was much demand in the local area for such a soccer facility.

“This small green space, which is owned by the Housing Executive, is not used often and the idea is to turn it into a football pitch in the short term,” he said.

“In Ligoniel, there is only one football pitch behind the youth club which can only be used by members. To say it is restricted is an understatement.

“Everyone seems to be positive about it. As someone who works in the local community, the local residents really want to get something sorted.

“Ligoniel is on a slope, so it seems the most sensible place for such a facility in the area.”

Tír na nÓg park was recently upgraded to include much-needed play area facilities for local children and a sports facility is seen as the next step of the journey by Councillor McCabe.

“Sinn Féin have been trying to secure proper soccer facilities in Ligoniel for many years,” he said.

“We are working on getting an agreement between the Council and the Housing Executive to get the area turned into a soccer pitch.

“Last week’s meeting was very positive in terms of mapping out a way forward on this.

“Historically, the area has always been a place where kids play soccer in Ligoniel. The potential for it is there.

“Community consultation is central but there is good support for the project. The Tír na nÓg park has recently been upgraded and looks magnificent so a sports facility would really be the next logical step of the journey.

“The first step is to get the area levelled out, with goal posts for a football pitch with a multi-use games area the long-term aim,” added Cllr McCabe.