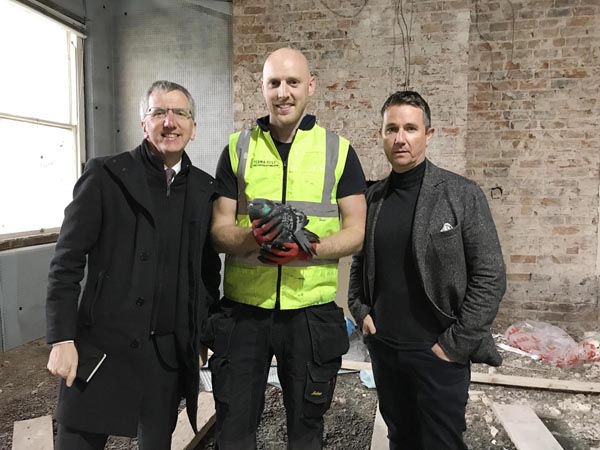 A SOUTH Belfast businessman has lambasted restrictive City Hall regulations on the restoration of listed buildings.

Anthony Kieran, founder and director of UsedcarsNI.com, purchased a property in South Belfast’s Upper Crescent area in 2015 with a view to making it into his company’s new office.

However since then Mr Kieran says he has faced nothing but red tape and bureaucracy.

Mr Kieran said: “Upper Crescent is unlike anywhere else in Belfast, the buildings are constructed in the Regency period and are very grand, it is easy to see why they are listed.

“We have worked in this area for many years and we have always admired the buildings, it has been very unfortunate that most of Upper Crescent has fallen into serious disrepair over the years. As of two years ago, most buildings in Upper Crescent were unoccupied and derelict.”

After he purchased the property in Upper Crescent, Mr Kieran got in touch with all the relevant agencies to ensure that things ran smoothly.

He said: “We applied for and received Listed Building Consent, Planning Permission and Building Control Approval. We put in place a very experienced architect and builder to oversee all works and our building work began in earnest in October 2016.

“The project was moving along well. However, as suspected, the building was in even worse condition than we had anticipated. In November our Structural Engineer confirmed that the wall was extremely unstable and had no suitable foundation. He instructed that the wall would need to be underpinned with a new foundation. While this was being carried out the wall became extremely unstable and fell down. As a matter of health and safety the wall was rebuilt to add stability to the building as it was felt that to do otherwise would create a risk to the integrity of other parts of the structure.”

While this work was being undertaken Mr Kieran received a call from the Enforcement Office within Belfast City Council informing him that a report had been received stating that work was being carried out without proper planning permission. The Council requested that they be provided with a written undertaking that this was not the case and Mr Kieran informed that an inspection would need to be carried out on the property.

Mr Kieran said: “A representative from the Historic Buildings arrived without prior notice and without giving us the opportunity to have someone on site to discuss the project with them.”

Mr Kieran was later informed that he was in breach of planning permission and all works must cease immediately.

“The builders stopped work immediately and secured the site,” said Mr Kieran “We have made several requests for information about the alleged breach and have also asked to meet with representatives from the Historic Buildings department to try and get the project back on track. However, we were told the only course of action was to attend an interview under caution, leaving me no option but to engage the services of a solicitor to represent us in this matter.”

As a result of this the project has now been put on hold for six months, with the property being broken into and equipment being taken as well as damage being done to the property.

Mr Kieran said: “We are very shocked and disappointed at how we have been treated by Belfast City Council. We are genuinely trying to improve the building. In return I feel that we have been treated like criminals. No doubt they will try to levy big fines towards us and put our company under even further financial pressure. As we have continually stated, we are willing to do whatever is necessary to address the concerns of the Council.”

South Belfast MLA Máirtín Ó Muilleoir said: “This is a £1m investment which would transform a derelict property and help return to its glory days one of Belfast’s finest streets. All of us want to defend and protect our built heritage but after allowing this building to fall into rack and ruin over a 20-year period, it’s vital that the Council gives this restoration work the go-ahead.

“It would be a shame if in the name of preserving a listed building the Council succeeded only in allowing this architectural masterpiece to remain a pigeon coop rather than see it reborn as first-class offices. The Council has invested heavily in cleaning up and reclaiming the Crescent Park at Upper Crescent much to the delight of local workers and residents, but the next step is to allow Anthony Kieran to lovingly restore a house which was the pride of Belfast from first built in 1849 until it fell into disuse two decades ago."

Maria O’Loan from Tughans Solicitors, who are representing Mr Kieran, said: “It’s very disappointing that there have been so many delays in dealing with this matter, this is directly contributing to the deterioration of an important listed building that has been neglected for many years.

“The City Council is missing out on a tremendous opportunity to bring this beautiful building back to its former glory. If this matter could be resolved quickly it would mean that there would be a chance of preserving some of the special features. As it stands there’s water pouring in.”

A spokesperson for Belfast City Council said, “In November 2016, Belfast City Council Planning Service opened an enforcement case after receiving a complaint about alleged unauthorised works, including demolition, to a Listed Building at 12 Upper Crescent. We have been working proactively with the owner with a view to addressing the issues. We have facilitated meetings with the owner and have advised that they submit new applications for planning permission and Listed Building Consent with the aim of regularising the alleged breach of planning control. These have not been submitted to date.”