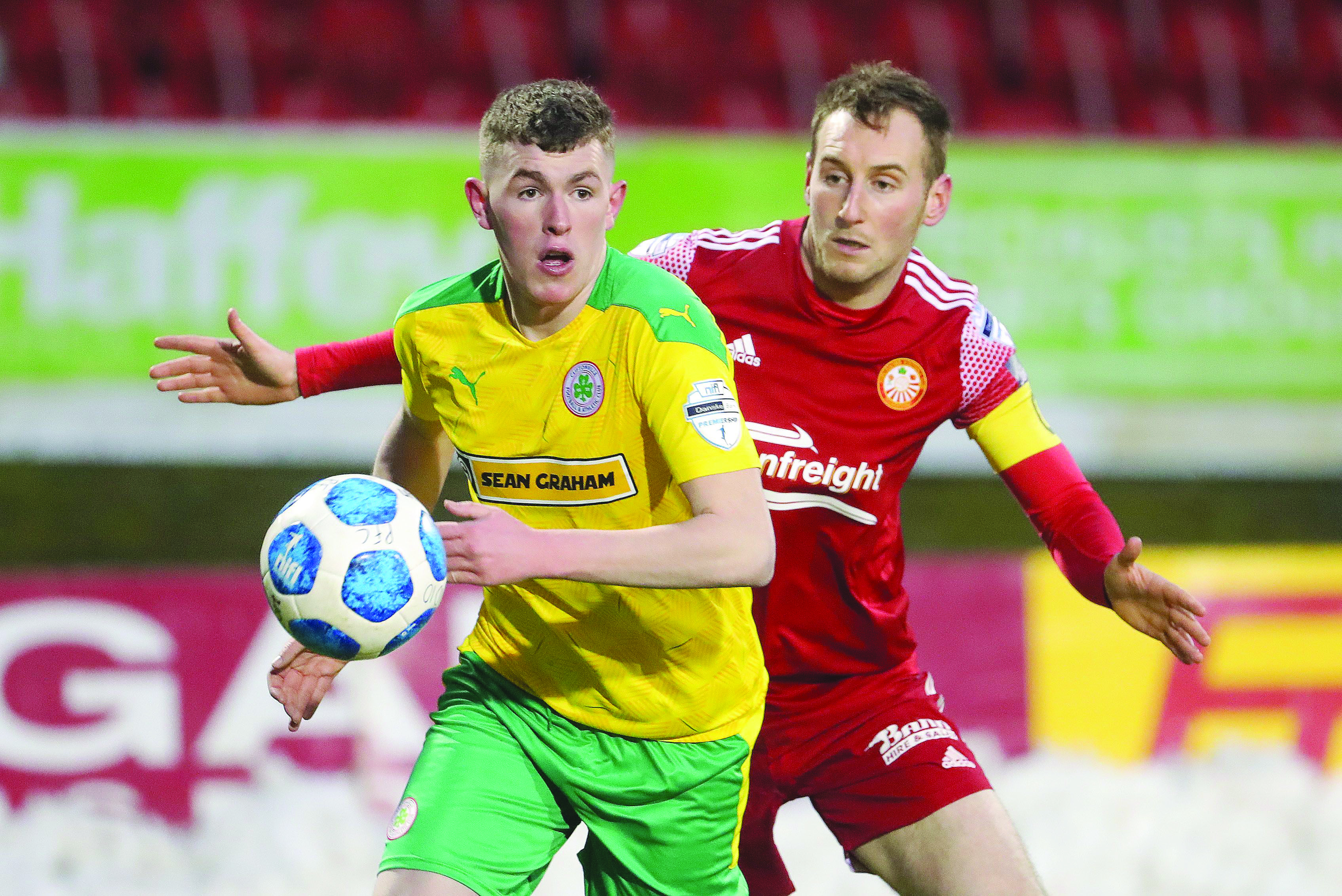 CLIFTONVILLE boss Paddy McLaughlin feels that his side’s best performances this season have come against the top teams and has challenged them to produce a big performance against Larne.

The Inver Park outfit travel to Solitude on Saturday (3pm kick-off) to looking to build on their 3-0 win against Dungannon Swifts at the weekend.

McLaughlin was full of praise for Tiernan Lynch’s charges and believes they are a top footballing side, but is looking forward to coming up against them.

“Our best performances are usually against the top sides and we’re going to need it against Larne,” believes McLaughlin.

McLaughlin was frustrated to see his team squander numerous chances to secure victory before being pegged back in Saturday’s 1-1 draw with Portadown and was disappointed his side were denied a ‘stonewall’ penalty.

“We had numerous chances,” McLaughlin admits.

“We’d a stonewall penalty turned down. I think was a clear hand-ball when Currany (Chris Curran) tried to cross into the box and the defender leaned into it to try and block the ball with his arm. It’s clear for all to see but it’s disappointing that the referee and linesman have somehow both missed it.

“It would have been 2-0 and we would have hoped it would have been game over but it didn’t go our way and we missed a couple of good chances to extend the lead. When you do that it leaves you open at the back and it only takes one set-piece to punish you and that’s what happened.”

🎥 Supporters around the world are advised of live streaming information for Saturday's Danske Bank Premiership fixture with Larne.

Saturday’s draw was a missed opportunity to capitalise on Crusaders' slip-up earlier in the afternoon and McLaughlin insists that surprise results will continue in the league until the end of the season.

“The results from week to week, I don’t think they are surprise results anymore,” said McLaughlin.

“There are so many of the bottom six taking points and getting wins against the top six that you don’t see them as shocks anymore. There’s one every week and you saw that earlier on today. It will happen, it’s been happening all season and I’m sure it will happen to the end.

“It’s important that when teams do drop points around us that we capitalise on it. it’s just unfortunate that we didn’t do it today with 30 seconds to go.”

McLaughlin is glad of a midweek break in fixtures this week and a chance to return to training three nights a week before they return to midweek action on Tuesday, February 23 with a trip to Ballymena United (7.45pm kick-off).

The Reds’ boss revealed that his side’s training schedule has been disrupted since the December circuit breaker and isn’t sure of the intensity of training for the week ahead.

“It’s a chance to get us back onto the training pitch together as a group because we haven’t been training together since Christmas,” McLaughlin revealed.

“It’s been recovery for most and a bit of work for the boys that haven’t been playing on a regular basis.

“It’s going to be good to get them back on the pitch, but that’s about seven or eight matches we’ve played in the last four or five weeks. It’s a serious schedule that’s been asked of them.

“How intense we train this week? I don’t know, it could be another week of recovery and getting them ready for another tough game against Larne and another mid-week game against Ballymena the following Tuesday.”