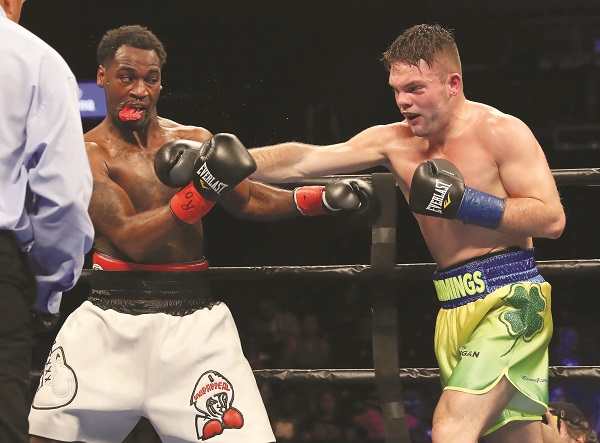 Saturday represents a homecoming fight for former Holy Trinity amateur, Conrad Cummings who has boxed on the road for almost two years including his points win over Dante Moore in Brooklyn last summer (pictured)

THE controversial loss to Ronny Mittag last November was a “blessing in disguise” according to Conrad Cummings who makes the first defence of his WBO European middleweight title against Robert Swierzbinski (18-6-2) at the SSE Arena on Saturday.

Back in November at Wembley Arena, Cummings was somehow denied on a split decision with the IBF Inter-Continental title up for grabs.

While that decision hurt badly, it spurred the former Holy Trinity amateur standout to produce the best performance of his career next time out when flattening Gogi Knezevic (who had defeated Mittag earlier in his career) in Edinburgh to claim the WBO European belt.

“I was absolutely heartbroken obviously and people keep talking about Mittag, but honestly, it was the best thing that could have happened to me,” claims the affable Coalisland man.

“Even though I won the fight and didn’t get it, I think subliminally it took the pressure off me maybe. I could have put him away, but I stuck to the boxing and moving.

“I came back after a break. I was down, a bit of time wasted again but I was back with a career-best performance and knocked the last boy (Knezevic) clean out. He actually beat Mittag so it was a real statement of intent.

“At the time, it (Mittag) loss was the worst thing in the world, but who knows? Maybe it was the best thing that ever happened to me.

It is clear that Cummings has a real spring in his step after that last victory and there was even the possibility of a chance to challenge Billy Joe Saunders for the WBO world title after Saunders saw his original opponent, Avtandil Khurtsidze arrested and stripped of the interim title.

Cummings was quick to put his hand up to fill the void, but Willie Monroe Jnr gets the shot at Saunders although Cummings feels that is a fight that can happen in the future.

“It does feel like I have a bit of a swagger now I have a belt,” he agreed.

“When your name is linked with Billy Joe Saunders it is very exciting.

“That guy (Khurtsidze) obviously pulled out and I said I would drop in. There was a realistic chance of that happening, so even to be in that mix is a real honour.

“I believe I have to go in here and look good. Billy Joe Saunders has that WBO world title, but I really believe I’m hot on his heels. He is on my radar so I hope it can happen very soon.”

For that to become a reality, ‘Mr Dynamite’ must ensure there are no slip-ups this Saturday against Swierzbinski who has mixed it at a good level.

His defeats have come against world class opposition including Chris Eubank Jnr and David Lemieux so is far from a soft touch and Cummings says he has prepared accordingly.

“He loses to world level boxers, but apart from that he has a good record,” notes the 26 year-old Cyclone Promotions’ boxer.

“He is the perfect fight at the perfect time. His last fight was against a guy who was 12-1 and he drew with him, so right away that would get your attention.

“He is thereabouts and a good step in the right direction. I’m fully focussed on him, fully ready and have been doing good sparring.

“I’ve been in camp for three months, was helping out (George) Groves for his title fight so I’m in a great place with no injuries. I’m just buzzing to get in there, stay cool and get a win to help me keep pushing on.”

While Saturday’s show is billed as a homecoming for Carl Frampton, it is a similar story for Cummings who has not boxed on home soil since his Celtic title draw with Alfredo Meli Jnr in November 2015.

Five fights on the road have left him keen to get back out in front of the Belfast crowd on what promises to be an electric night.

Like the fight fans in the city, Cummings loves the atmosphere and buzz around on fight week and he says he intends to savour every second before delivering a top-class performance that can see him climb the ladder further and edge closer to that world title shot he craves.

“I can’t wait to get back,” he confirmed.

“I have been on the road for about the same length of time as Frampton and obviously I’m coming back as a champion, defending my WBO European title.

“I’m looking forward to it. Once again, I’ve had to do it the hard way. I’ve learned from my mistakes in the past and here we are. I’m going to enjoy every second of the fight week can’t wait to get in there.

“When I do get in there I’m just going to enjoy, let them (punches) go.

“It’s going to be a good night, get a good win and keep pushing on.”