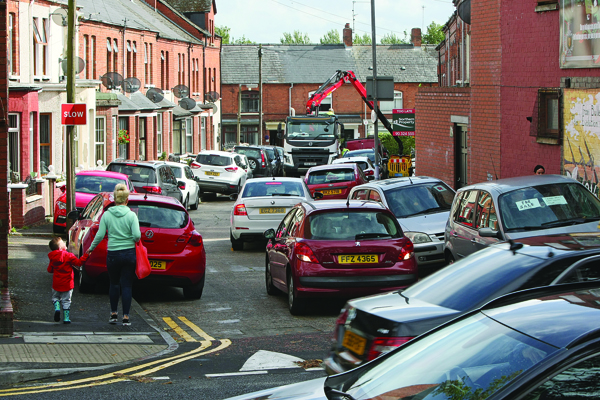 NO WAY THROUGH: Congestion on Hugo Street as St Kevin’s school gets out on Monday afternoon; below, a photograph of the damage caused to a car in the street

RESIDENTS whose homes are near St Kevin’s Primary School have called on the Department for Infrastructure (DfI) to allow for allocated drop-off and pick-up times for parents as their street has become a ‘no go area’ since the introduction of the Glider.

Parents are no longer permitted to park in the bus lane outside the Falls Road school when leaving off or picking up their children. However, as a result Hugo Street – which is next to the school – has seen an upsurge in parking by parents in the morning and afternoons.

Lorraine Brady, who has lived in the Falls Road street for 35 years, said her nephew’s car was badly damaged last Wednesday afternoon as it sat parked outside her home. She said the street has now become a bottleneck. Lorraine added that residents are having to wait or not go out at all between the hours of 2pm and 3pm, such is the congestion in the street.

“My nephew’s car was hit once and the driver drove away – how many more cars are going to be hit?” she asked.

“It’s getting really bad and the kids only went back to school last Monday. Parents are parking in the street, where does that leave the people who live here? We have to wait to get into where we live,” she said.

Lorraine’s sister Jeanette O’Brien whose son’s car was parked and badly damaged said his vehicle wasn’t even drivable due to the severity of the damage caused.

“We have all attended meetings with (People Before Profit’s) Gerry Carroll and the DfI know of our concerns, I don’t know what can done,” she said.

“The parents should be given some leeway in the morning and afternoon to drop-off their kids. Why can’t they park from 9am to 9.15am and arrange a time in the afternoon to do the same.

“Parents are parking in the City Cemetery and it will get to the stage where they will close the gates or there will be a bad accident.

“Things aren’t getting any better, they are getting worse. Something needs to be done.”