Rockfall at Cavehill as the earth moves 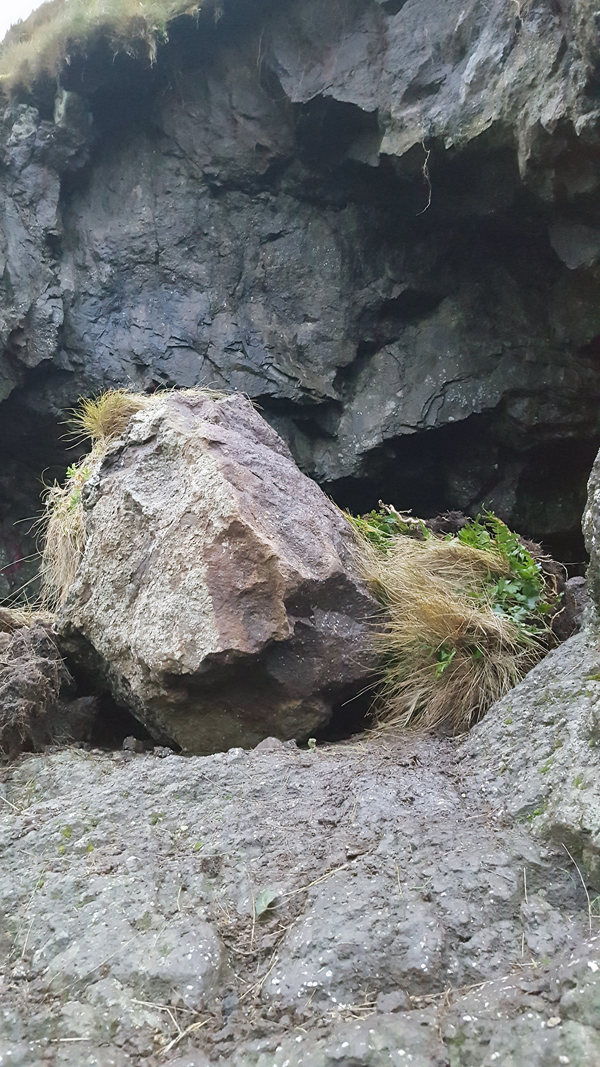 One of the famous caves is partially blocked

THIS is the massive rock that has fallen down Cavehill and partially blocked the one of the famous caves.

And as these pictures taken this week show, there are cracks in the rocks right above the cave where there is the danger of another landslide.

This lowest cave is relatively easily to climb into – Dúlra’s been in it a couple times, although it’s not for anyone who’s not fit and getting back down can be a little trickier than climbing up. But if you are with someone who can stay on ground below to give you heave up – and catch you just in case you slip – it’s a wonderful experience and, although not on the tourist map, generations of people have stepped inside it over the years.

You’ll need a torch to go right to the back of the cave and examine the walls for ancient writing – Dúlra’s not sure if he saw any ‘Up the United Irishmen’ graffiti, but there’s certainly plenty of more recent political slogans there.

The bolder which now sits at the entrance rolled about a hundred feet – you can clearly see the bare scraping above the cave where it once was. And it is much bigger than it seems in this photograph – it may even be the weight of a car. And if any tourist or visitor had been climbing into the cave at the time, well, it doesn’t bare thinking about.

There are often inherent dangers in visiting the countryside – Napoleon’s Nose at the summit of Cavehill is of course totally exposed, and the prevailing wind nudges you terrifyingly towards the sheer drop. Dúlra brought his young kids there once and found himself holding their hands so tightly that they were numb.

And after that one scary visit, he never brought them back to the summit again.
And of course rocks can fall from cliff-faces at any time. In the Glens of Antrim, nets cover many of the cliffs along the coast road to prevent landslides. Maybe, in light of this latest bolder landing right at the entrance to the cave, the authorities might consider putting similar nets on Cavehill.

There are five caves in total on the old Beann Madagáin, and none of them are natural. Incredibly, they were cut by hand centuries ago – the upper ones were incredibly dangerous to reach and many lives have been lost trying to climb to them.

Even more incredibly, the fourth and fifth caves – about 150ft above the entrance to the first – are accessed by a tunnel leading from the third cave and one of the caves even has a window. It must have been like staying in a hotel suite.

Those caves are a famous part of Belfast’s folklore and attract visitors from far and wide, but as these pictures show, they too need protecting.

“I’m watching two jays near my house in Hazelwood Avenue on the edge of Poleglass. I sometimes see them when I’m walking in Colin Glen, but only in ones. Is it possible they are breeding?” Reader.

Dúlra writes: This is a wonderful bird that too few people ever spot – and they are making their way into West Belfast. They are early breeders – laying eggs in April – so there’s every chance they are beginning to find a partner and even build a nest. It would be great if they build a nest in your street as you will be able to watch them all year around.