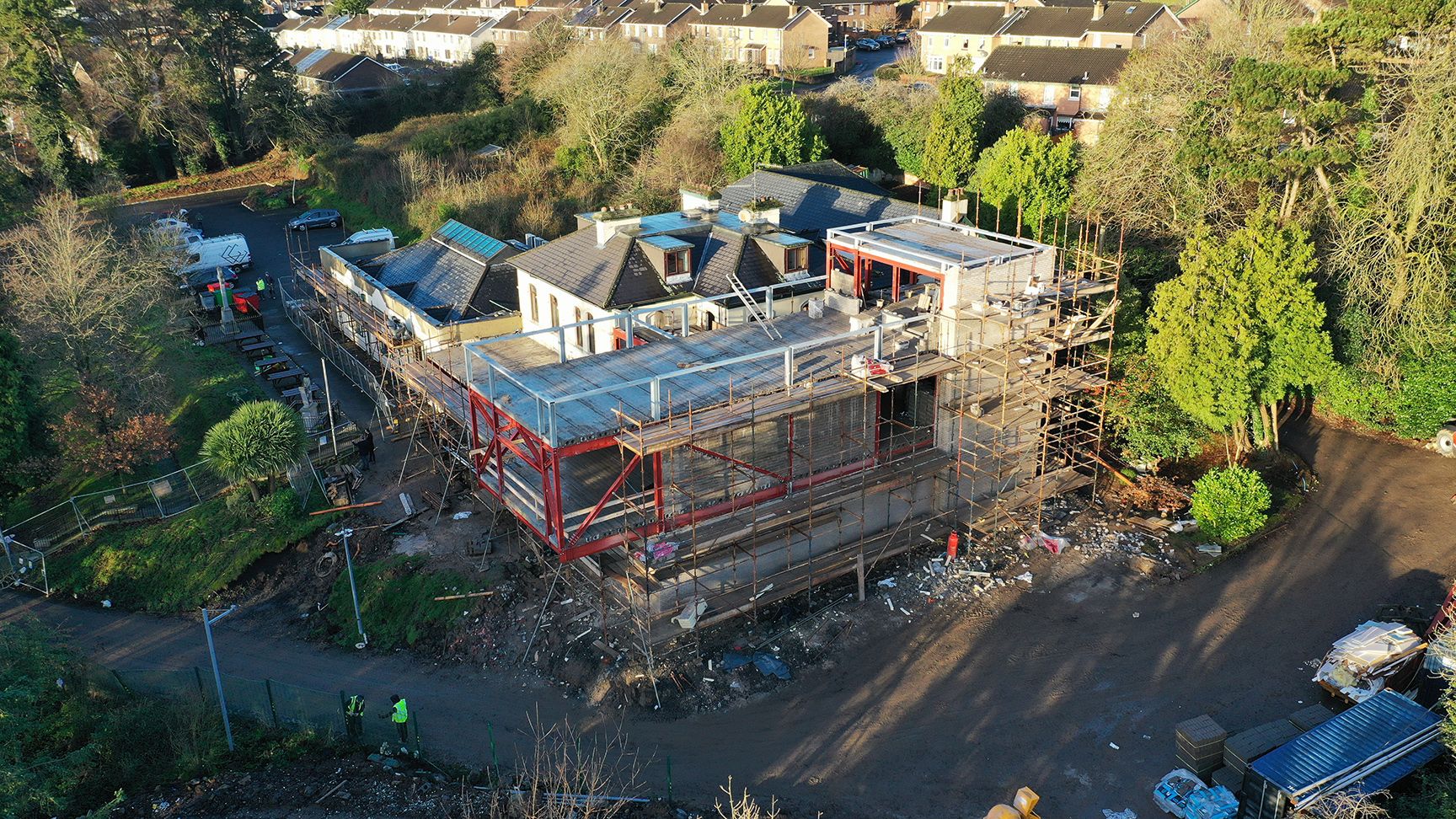 REDEVELOPMENT: Construction of the new Roddy McCorley Heritage Centre is in advanced stages

CONSTRUCTION on the new interpretive centre at the Roddy McCorley Club is progressing with a handover scheduled for mid-June – in time for the club’s fiftieth anniversary celebrations.

The new museum and heritage trail is funded to the tune of £1.35 million from Belfast City Council and will also include a 140-seater restaurant and roof terrace with views across West Belfast.

Deputy First Minister Michelle O’Neill cut the first sod on the site back in May and it is expected that the new centre will complement the offering of existing and future tourist centres and museums within the West of the city.

Discussing the progress, Roddy McCorley Society chairman, Davey McGivern said that the society moved onto the current site in 1984.

“We bought the house from McAlinden the bookmaker and as we acquired money we were able to add on a few extensions.

“Around that time, quite a few of our members would have been interested in historical associations and republican memorabilia. We started with a collection of artefacts but we never really had a museum.

“The team working on the current heritage centre have told us that we had a magnificent collection of artefacts but there was no story. There was 2,000 artefacts across three rooms but we are laying the new museum out so that it has a walk through story starting in 1798, going through 1916, through to the '70s and internment and it will finish with Séanna Walsh reading out his statement in 2005 announcing the end of the armed campaign which was filmed here.

"We also have the flag that was in the background and a copy of the statement.

“It is a very quick synopsis of the republican struggle from the United Irishmen, right through to recent times.”

Davey said that over the years people started to bring artefacts to the society and they didn’t have enough space to display them all.

“Around ten years ago, discussions began on how we could develop somewhere to display everything we had. We looked at funding and where we could get assistance. It really went nowhere until we were made aware of the Social Outcomes Fund through Belfast City Council.

“With the assistance of Fáilte Feirste Thiar, we looked at the feasibility and then we put forward a presentation to the Council. It was assessed by Council and the report ticked all the boxes.

“It took years and years of getting to the stage where we had the money, but we hope to have it completed by June.

“The people within this local community know what great facilities we have here. Pre-Covid we had over one million tourists visit West Belfast and the tourism offering was quite limited. We are hoping that this is a great catchment to bring more people to this part of West Belfast and they will then be able to go away with a narrative that tells the story of our artefacts.”

In addition to the construction of the heritage centre, there are also plans to install a monument within the grounds, dedicated to the burning of Long Kesh. This alongside the current monuments, will form part of a heritage trail within the grounds.