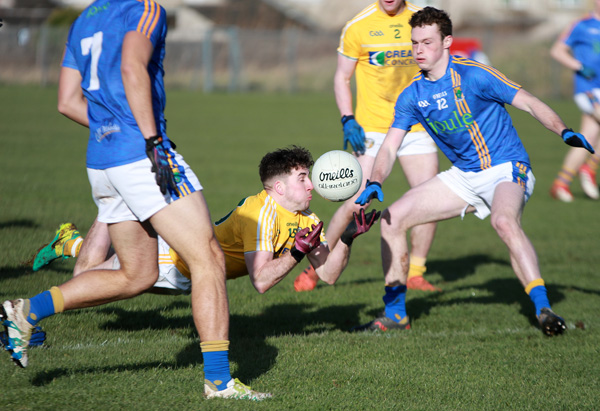 From Paddy Tierney at Corrigan Park

ANTRIM’S promotion prospects suffered a setback yesterday after they were held to a draw by a dogged Wicklow side at a wintry Corrigan Park.

Two pitch inspections were carried out before the game was given the go-ahead, but the heavy surface and an icy cross-field breeze made conditions extremely difficult for both teams.

The Garden County will probably feel more satisfied with the result after midfielder Rory Finn landed an injury time equaliser while Antrim substitute CJ McGourty missed the chance to claim both points with the final kick of the game, albeit from a difficult free kick.

Yet, the main talking point of the game was the erratic performance of referee Niall McKenna from Monaghan, who dismissed two Wicklow players, skipper Seanie Furlong and substitute Theo Smyth, both for second bookings, in the second half.

Both Antrim boss Lenny Harbinson and his Wicklow counterpart John Evans felt aggrieved after the game with Harbinson lamenting: “People say common sense is common – I think there was a lack of common sense on occasions, taking into consideration the conditions. That’s for both sides.”

Evans was also bemused by the dismissals of two of his players and felt that the referee was unduly harsh on his men.

“We were certainly mesmerised by some of the decisions, and so was everybody else,” said Evans.

“I won’t comment any further other than to say that Antrim showed great experience in earning frees. We’ll have to learn or go through a few classroom lessons to learns to do that.”

Wicklow made the brighter start to the game to raced into a 0-4 to no score lead with Furlong hitting two points while goalkeeper Mark Jackson kicked two excellent long-range frees.

Antrim’s first point didn’t arrive until the 12th minute via a Paddy McBride free, but a stunning score from Ryan Murray five minutes later helped the Saffrons gain a foothold in the game and the sides were level at 0-6 at the break.

The impressive McBride was again to the fore in the second period as Antrim opened up two-point leads on two separate occasions. Yet Wicklow, led by their industrious centre-half back Dean Healy, kept themselves within touching distance throughout and the Saffrons were unable to put the game beyond the Leinster side.

Antrim looked set for their third successive victory when Wicklow lost Furlong to a second yellow following an off-the-ball melée and corner-back Peter Healy moved the hosts 0-11 to 0-9 ahead with five minutes remaining.

Wicklow’s challenge appeared to have ended with the dismissal of substitute Theo Symth for a second yellow following a rash tackle on Paddy McAleer, but back-to-back frees from Jackson and Darragh Hayden tied the game in the closing minutes.

McGourty missed a chance to put Antrim ahead once more, but made amends in the next passage of play when he fired over a brilliant first-time effort.

Wicklow, though, were nothing if not game and, with little options in front of him, midfielder Rory Finn unleashed a thunderous strike against the breeze which sailed over Chris Kerr’s crossbar to tie the game at 0-12 all in injury-time.

With time almost up, Antrim were awarded another free for a foul on Ryan Murray, and, as he did for much of the game, McKenna moved the free 10 yards forward for dissent.

After some consultation, McGourty opted to take the kick, but his expression said it all as his effort dropped harmlessly short of the target and the Garden County cleared the danger. It proved to be the last act of an engrossing game and one which leaves Antrim little room for error for the remainder of the campaign as they seek to make a swift return to Division Three.