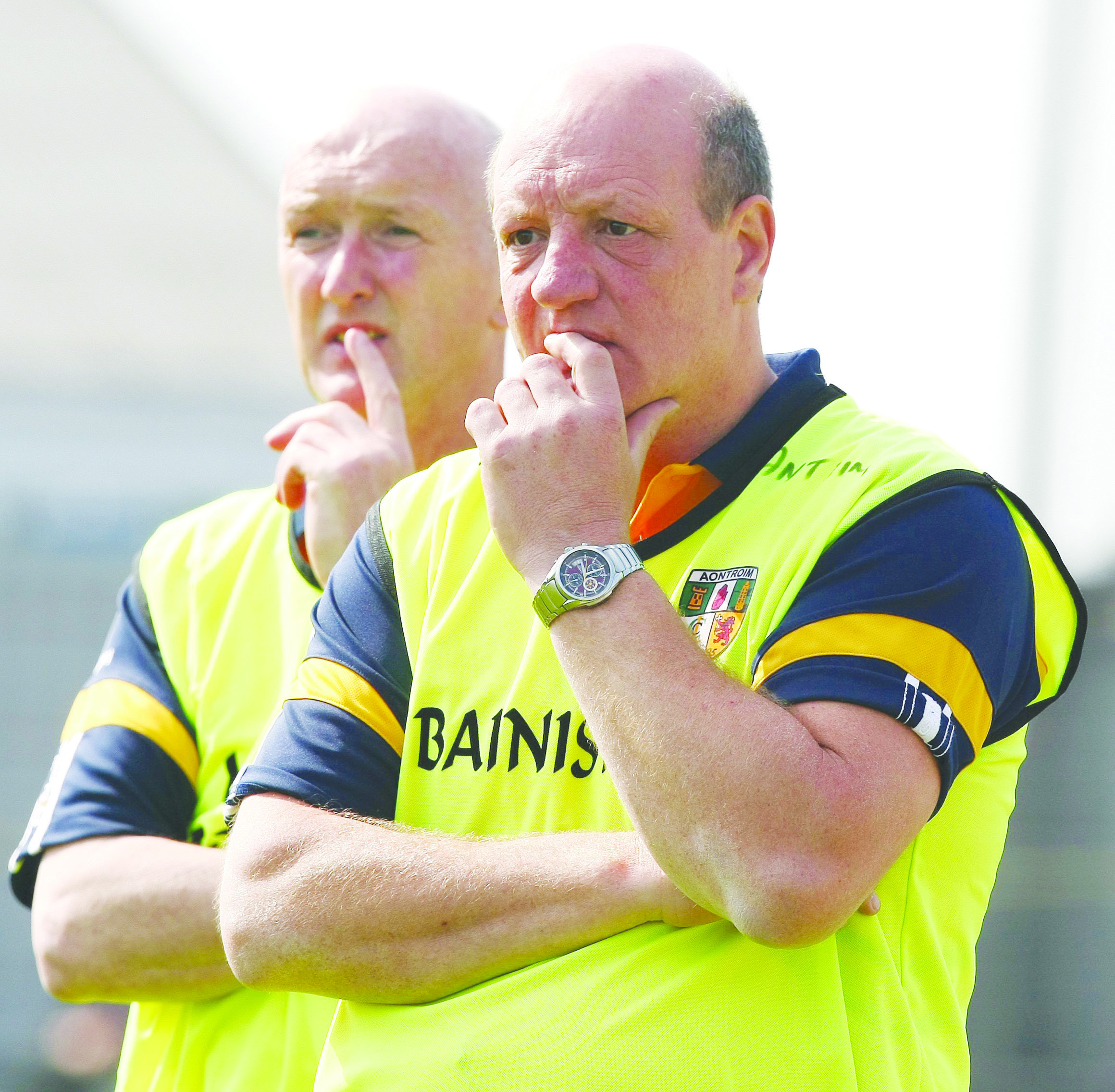 THE former management duo of Terence ‘Sambo’ McNaughton and Dominic ‘Woody’ McKinley will oversee the fortunes of the Antrim Senior hurlers for the remainder of the season following the shock departure of PJ O’Mullan last week.
McNaughton will be assisted by McKinley as well as former county hurlers Gary O’Kane from Dunloy and Neal Peden of St John’s.
The new management team will have just over two weeks to familiarise themselves with the current squad ahead of the Christy Ring Cup opener against Kildare on Saturday, April 23.
That fixture is set to be moved to Dublin in order to accommodate Antrim supporters wishing to see the Division Four football final between the Saffrons and Louth at Croke Park on the same date.
The Lilywhites will also be in action in Croker as they face Clare in the Division Three decider.
It is believed that the hurling will be switched from Ballycastle to the new GAA stadium at Abbotstown with a 1pm throw-in with the football final starting at 4pm.
While the footballers will bid for a national title, the hurlers will bid to salvage something from what has been a bitterly disappointing campaign thus far.
O’Mullan’s departure followed a Division 2A campaign which saw Antrim lose to Carlow, Westmeath and London to remain marooned in the third tier of the hurling league for next season.
Even so, O’Mullan’s exit came as a surprise when the news broke on Friday.
The Loughgiel native had to due to meet the Antrim executive to review the poor National League campaign.
Instead, the meeting ended with O’Mullan and Antrim agreeing to part company.
“It had run its course,” said Antrim county board chairman Collie Donnelly.
“He is an experienced manager and hopefully he will come back better for it in the future.
“We had issues over the performance of the team. At the end of the day, we won two games and we were beaten three times by teams which we, and PJ, had aspirations of beating.
“There were discipline issues associated with that. It was just a combination of things.
“He maybe felt that he had lost the confidence of the county board.
“We are very mindful of the fact that we are not Man United. You have to understand that these are fellas who are giving up a lot of their time.
“PJ agreed to move for the betterment of Antrim.
“We thanked PJ and all the backroom team for their efforts.
“At this juncture, the county management thought it was time to hit the reset button.”
Antrim’s decision to turn to McNaughton and McKinley is sure to prove popular with the players – many of whom would have worked with ‘Woody’ through the development squads.
Only Neal McAuley and Eddie McCloskey would have played under McKinley and McNaughton back in 2009. While ‘Woody’ has been working with the development teams in recent years, ‘Sambo’ guided Cushendall to a county title in 2014.
This year, he was the team’s trainer as the Ruairi Og’s reached the All-Ireland final, only to lose to Limerick’s Na Pairsaigh on St Patrick’s Day.
The Cushendall contingent is expected to return to the fold this week.
It is understood that Ryan McCambridge, Conor Carson, Eoghan Campbell, Paddy Burke and Sean McAfee will link up with the squad this week.
Neil McManus and Arron Graffin are unavailable for the remainder of the season as the pair plan to go travelling while Dunloy’s Paul Shiels continues to recover following a hip operation earlier this year.
The new Antrim management team will also have to plan without the services of attacker Liam Watson, who also left last week.
The Loughgiel Shamrocks ace was a one of a number of high-profile returnees this season after being coaxed back by his former club manager.
However, after three years in inter-county exile, Watson was unable to rediscover the kind of form which saw him land an All-Ireland club title with Loughgiel in 2012.
Before his departure, O’Mullan had vowed to cut the panel by five in order to accommodate the return of the Cushendall players.
It remains to be seen whether or not the new management set-up will go ahead with the planned revamp of the squad.
Meanwhile, the Antrim county board have released a statement refuting claims made by Watson earlier this week.
Speaking to the Belfast Telegraph, the Loughgiel clubman claimed the players were asked to take a cut in their mileage expenses and bemoaned the lack of gear the hurlers received this season.
However, the county board were quick to dismiss the criticism.
“The Antrim GAA County Board wishes to refute in the strongest possible terms the erroneous allegations about player welfare that have been made against Antrim GAA by a former county hurler,” the statement read.
“Allegations that players were “asked to take a cut” in their mileage expenses are completely false.
“Similarly, claims that the Antrim senior hurling squad have been denied adequate playing gear are without foundation.
“Our players received all of the gear that they were entitled to.
“Following a meeting on February 24, 2016, involving the players, team management, and county board officials a system of paying expenses was formulated. This was agreed by all parties.
“After a difficult start to the 2016 season, and the disappointing decision of PJ O’Mullan to step down from his role as senior team manager, this is an important time for all of those with a vested interest in the development of Antrim hurling to pull together.
“Antrim GAA is committed to enabling our players at every level to be the best they can be and to be competitive on the national stage.
“It is regrettable that an attempt has been made to deflect from where our focus needs to be, but we are committed to working with the players to ensure Antrim hurling makes strong strides forward throughout the rest of the 2016 season.”