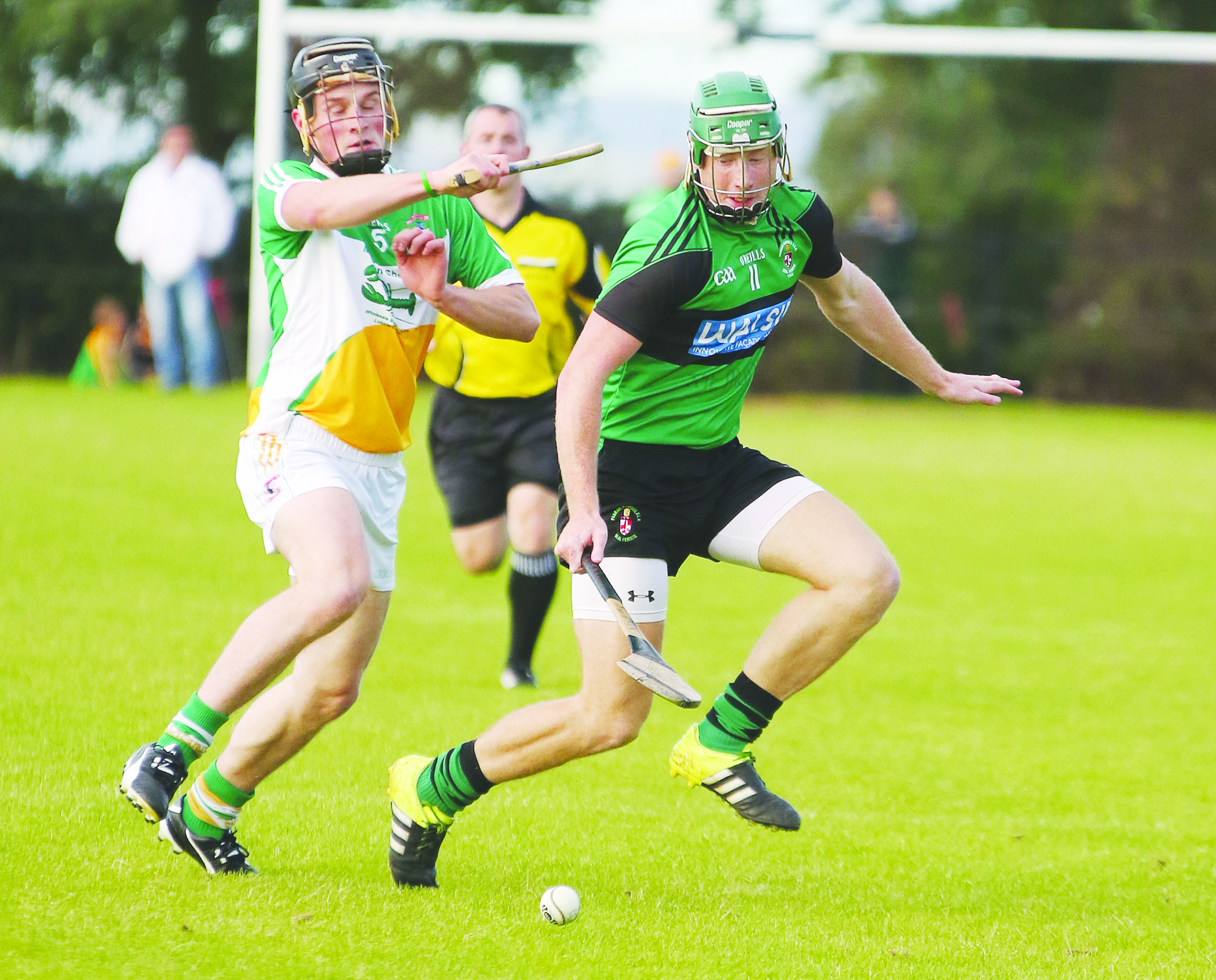 AT half time in the second match at Ahoghill last Saturday evening, it was going to plan for Sarsfield’s.

They led by six points and put in 30 minutes of high octane hurling that left Glenariffe chasing shadows for the majority of the half.

Dan and Donal McKernan were leading the Oisins a merry dance and the six point lead that they had accumulated was the very least that they deserved.

By the full-time whistle though it was the men from North Antrim who were celebrating progress in the Intermediate Hurling Championship as they edged past Sarsfield’s with two points to spare.

The wheels started to come off the Paddies wagon in the opening exchanges of the second half when the side from Waterfoot scored an unanswered 2-1 to take the lead for the first time in the preliminary round match.

Although Sarsfield’s regrouped, the telling score came with eight minutes of the match remaining. The sides had gone score for score with neither gaining an upper hand. Our thoughts turned towards the potential of extra time when Glenariffe scored their third goal of the match to put daylight between the sides.

Sarsfield’s started the match with tremendous intensity and surged into a five point lead inside the opening seven minutes. Dan McKernan split the posts three times with Donal McKernan landing two mammoth frees from fully 80 yards to rattle the Oisín’s in the early stages.

Glenariffe finally opened their account in the eighth minute when minor star Alex O’Boyle split the posts from a 21 yard free but they were struggling to deal with the ferocity and work rate of their opponents.

Donal McKernan added his third of the match when he split the posts from a sideline cut to restore the five point lead for the Paddies, but Glenariffe had the woodwork to thank for keeping them within touching distance. 15 minutes had come and gone when Niall McKenna sent a long ball into the Sarsfield’s full-forward line. Glenariffe failed to clear and Daniel McKernan almost took full advantage but his snap shoot rebounded off the foot of the post.

Randal McDonnell doubled the Glenariffe score with a well taken point under pressure from two Sarsfield’s defenders, but the first half belonged to the West Belfast men.

Dan McKernan and O’Boyle exchanged frees to leave four points between the sides when the first goal of the game arrived. Ten minutes remained in the half when McKenna passed to Dan McKernan in space.

The Sarsfield’s man saw his shot brilliantly saved by Seanan McToal but Mark Rea was first to the rebound and fired to the back of the net.

Glenariffe reshuffled their pack in an attempt to get back into the game with Ciaran Leech and Kieran McKendry entering the fray and although they outscored Sarsfield’s two points to one in the closing stages through O’Boyle and Randal McDonnell with Donal McKernan answering for the Paddies, it was Sarsfield’s who would have been undoubtedly the happier of the sides at the interval.

The hard work and brilliance of Sarsfield’s in the opening half was undone in five second half minutes when Glenariffe hit back.

O’Boyle split the posts from a close range free in the first minute after the break when an error in the Paddies defence leaked a penalty.

Kevin McDonnell was dragged down when he was one-on-one with David Ward and referee Colm McDonald had no option but to award a penalty.

Full-forward Paul McDonnell blasted his effort down the middle and although Ward deflected the sliotar, the force of McDonnell’s shot forced the sliotar over the line.

Barely 60 seconds had passed when Glenariffe breached the Paddies goal line yet again. A long ball was played into space where O’Boyle managed to round his man and find himself through on goal. Ward was equal to his effort but Kevin McDonnell was first to the rebound and he made no mistake to give the Oisín’s the lead for the first time in the match.

The sides went toe to toe for the next 15 minutes with the lead changing hands three times. Sarsfield’s had visibly tired from their first half exertions while O’Boyle was starting to pull the strings for Glenariffe, his pointed sideline from fully 50 yards the highlight of the second half.

The sides were tied in the 52nd minute when Glenariffe dealt a fatal blow to the Paddies 2016 Championship hopes. Paul McDonnell disguised his pass beautifully to Seamus McDonnell and the Glenariffe half forward fired the sliotar to the back of the net to open a three point advantage for the Oisín’s for the first time in the match.

With manager Kevin McKernan absent from the game, Danny McCavanagh was in charge of the Paddies and believed that his side’s fitness was the telling difference between the sides at the full-time whistle.

“I think we emptied the tank in the first half,” said McCavanagh.

“We’ve had issues throughout the year with injuries and some of the guys are maybe not as fit as they should be and that told in the end.”

McCavanagh’s attentions turned towards the league and the future for the Paddies. A mixed season so far sees the West Belfast side lingering in fifth position with five games remaining. It is still mathematically possible for Sarsfield’s to make a late challenge for promotion but they would need to win their remaining games and hope other results go their way.

“We have a great bunch of lads here and some smashing players,” he added.

“We’re in Division Three but these lads are capable of playing at a much higher standard.

“Our focus turns to the league now and possibly promotion but if that doesn’t happen this year it’s important to stay together as a squad and make sure that it does happen eventually.”

Randal McDonnell and Michael Gettens had huge games for Glenariffe while Alex O’Boyle tormented the Paddies defence all evening. The midfield pairing of Darragh McGuinness and Donal McKernan went through a mountain of work for the Paddies but our Star Man goes to Daniel McKernan. Quite simply it is hard to ignore the fact that McKernan scored 0-9 of his side’s score with just four frees included in his personal tally. Points from all angles and ranges, McKernan was too hot to handle for the Glenariffe defence and, while he tired in the second half, he was always a threat with his trickery and movement always keeping the Glenariffe defence guessing.