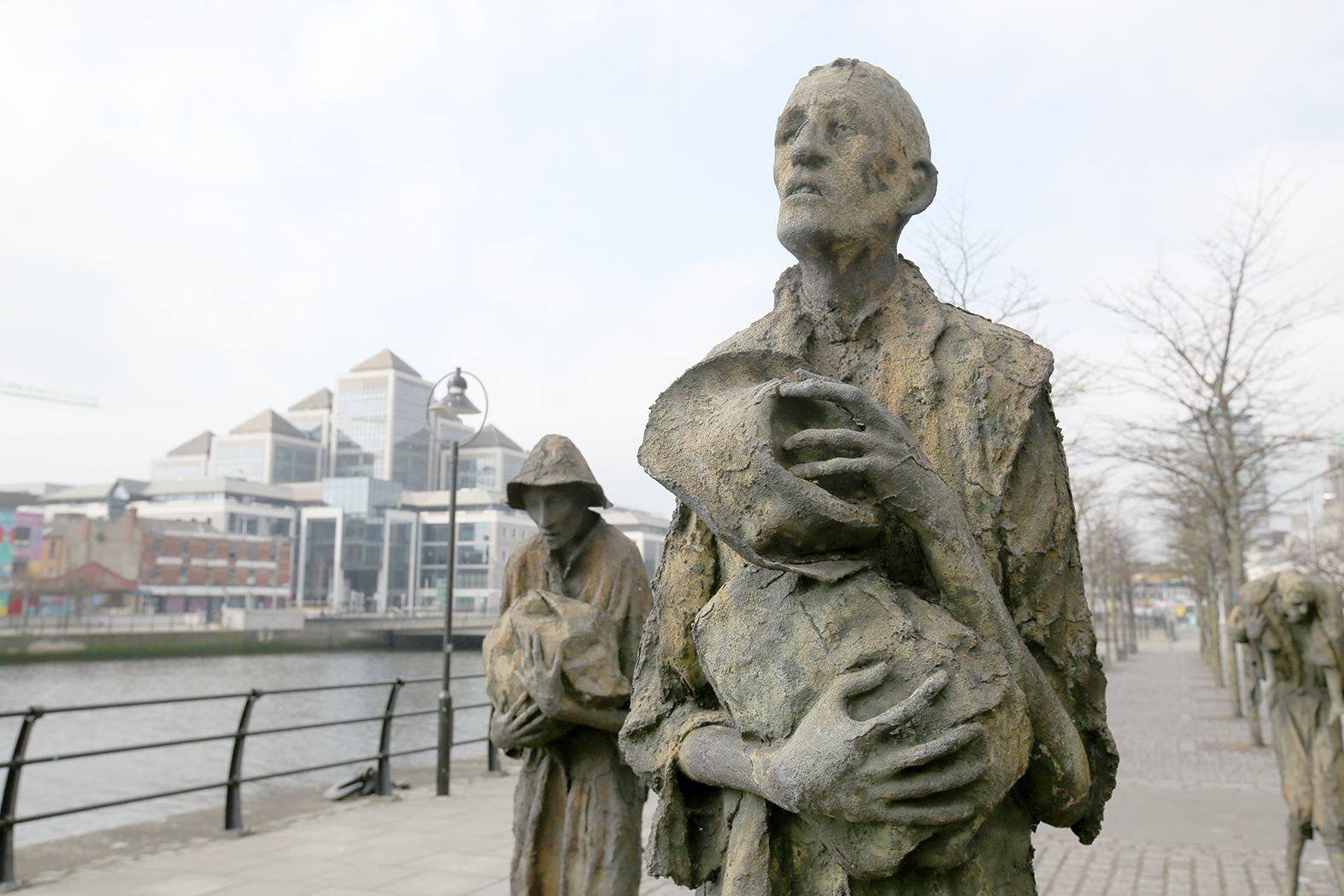 HORROR: One of the famine statues on the Quay in Dublin

PEOPLE know little of the impact of the Great Irish Famine on Belfast and the typhus fever and cholera outbreaks of 1847 and 1848/49 that followed in its wake or of the huge numbers of destitute and poor who poured into Belfast from the countryside for refuge.

This research reveals horrific accounts published in contemporary Belfast newspapers in 1847 of the Shankill Road Cemetery. The other two Belfast cemeteries at Friars Bush and Clifton Street were in the same appalling states but have been more historically documented.

The Northern Whig reported on the emergency circumstances presented by the fever epidemic in Belfast on July 15th 1847, titled, ‘Town Meeting, Interment of the Poor’.
The meeting convened by the Mayor was attended by councillors, medical experts, clergy and prominent citizens. Doctor Denvir clarified the purpose of the meeting as addressing, “as a most urgent subject, namely, the providing of a proper place of interment for the poor, who were , at present, dying in very great numbers, in the town of Belfast...”

During the meeting the Rev, Richard Oulton, “…spoke of the way in which his feelings had been harrowed by the dreadful sights he had seen in grave-yards of late, when attending to read the burial service at the graves of the departed. Coffins were heaped upon coffins, until the last one very often was not more than two inches under-ground; and, in finding room for others, bodies that had not been long buried were often exhumed. There was not a spot in the parish grounds that was not occupied; and the matter could not be neglected any longer, unless they wish to have such scenes as were witnessed at Skibbereen brought home to their own doors.”

In subsequent editions of the Northern Whig the matter was reported on including the seriousness of the situation for lack of space for interment of the poor during the fever epidemic that swept over the town in 1847. Their report of August 24th 1847 of a public meeting held at the Town Hall on the 23rd August, chaired by the Mayor to consider the provision of new burial ground for the poor of Belfast quoted the following figures for mortality in the town from Dr McGee who stated, “Taking into account those who died through the town, the mortality could not be taken at a lower figure than from 120 to 130 weekly.” Belfast had a population of approximately 100,000 inhabitants at that time.

Dr Mc Gee made the revelation, that the shortage of burial space in Belfast was so bad that bodies had been left exposed above ground in local cemeteries, adding that the Board of Heath Officers had to take emergency action to find means of interment of bodies that were left exposed.

At the meeting Dr Stevelley revealed that upwards of 2,000 persons had been buried in the graveyards of Belfast since the Boards of Health had been set up some three months earlier.

The Banner of Ulster in June 1847 published a letter from an unnamed ‘respectable correspondent’, titled Shankill Burying Ground. “On Saturday I visited this receptacle for the dead, and was truly horrified at the scene I witnessed. The great majority of the graveyard presents the appearance of a newly ploughed field; and in the north-west corner there was a huge pit, covered by a frame-work of wood, with folding doors; while along side of it another pit was opened, about twenty feet square, and twelve deep, nearly half filled with water.

The banks on either side were formed of coffins, out of some of which I could observe human skeletons protruding; these were braced at right angles with planks, to preventing the coffins from tumbling in. On inquiry, I learned that these pits were for the reception of the bodies of strangers who had no claim to any of the grounds.

The Newsletter in its report of the Public Meeting at the Town Hall on August 23th 1847 gave a graphic and horrendous account of the practices that cemetery staff had to resort to, including the physical destruction and obliteration of dead bodies already interred in the ground at Shankill Cemetery to make room for fresh interments.

The one covered with the wooden frame and doors, I was told, contained upwards of twenty coffins, which had, within the last ten days, been deposited there, but my informant added that it would contain some twelve or fourteen more before they would remove the frame, and place it over the pit adjoining. In many parts of the yard there is scarcely a green sod over the coffins. I saw many coffins partly above ground, while here and there lay, promiscuously huddled together, a huge mass of old coffins, breast plates, &c., which had occasionally been taken out of the ground, as, I was told, ‘to make room’.

I enquired what was done with those coffins? and was informed, that, when properly dried, they would be burned. I was also horror-struck at beholding almost every grave, particularly the newly-made ones, present the appearance of a rabbit burrow, in consequence of the prodigious number of rats that have taken up their abode among the slumbering ashes of the dead. I counted no fewer than nine holes in one grave! Could not some means be devised to banish these vermin? It is really heart-rending to look at the ravages they are making. On the whole, had I not seen for myself, I could not have believed that Ulster contained such a place as the burial grounds of Shankill.”

On December 1847, the following letter appeared in several Belfast newspapers under a column titled, ‘WANT OF SUFFICIENT PLACES FOR BURIALS OF THE DEAD IN BELFAST’ stated,

Sir, - On last Monday, it was my melancholy duty to accompany a funeral to the Shankill, when I saw two coffins quite bare, and the entire side of a third, which had been laid down there that day, was quite exposed on the lid of which there was not more than two inches of earth, and the whole three were quite on a level with the walk – or, rather, above it. The grave opened for the individual’s remains about to be interred, was not more than a foot and a half deep, on the top of a coffin, about half decomposed; and, at another funeral which I lately attended, the grave opened presented a sight truly sickening, and so shallow was it that I do not think  the end of the coffin could be covered. The three exposed coffins attracted every eye; and, on pointing the attention of the sexton to it, his reply was –

‘There is not room for a tenth part of the dead.’ I believe the state of matters in Friar’s is equally bad. The department for the poor, in the New Burying Ground, is also overfilled; and for the decent and industrious poor of Belfast there is now, literally and truly, no place of burial, and the coffins are lying on the surface uncovered. Now, Sir, this is both disgraceful and disgusting, and it should not and cannot be permitted to continue. Whilst I was on the Board of Health, this subject was often discussed, and efforts were made to get the Poor Law Commissioners, to open the ground they are about to purchase for the poor generally.

This they refused,  and will limit it to those dying in some of the public charities; so that not only now, but for the future, there seems no hope that the common feelings of humanity are to be respected., so far as the poor are concerned. In the meantime, I do trust our townsmen will meet, and do something at once to remedy an evil so repulsive to every feeling of humanity, and so utterly unbecoming a Christian community.

At the conclusion of the Town meeting of July 15th 1847 it was agreed that a letter would be written to the Poor Law Commissioner asking that, given the emergency in Belfast, if access to the Workhouse burial ground be made available for the interment of the deceased poor of the town generally, wherever they had died and to reiterate the seriousness of Belfast’s situation regarding the desperate shortage of burial space. This was subsequently refused but it was permitted to extend its use that those who had died only in ‘charitable institutions only’. This excluded the poor dying in their homes or found lying in the streets.

The town council and medical officers were deeply concerned that Belfast did not have a ‘general’ burying ground for the poor in addition to the existing cemeteries. At various town council meetings on August 23rd 1947, consideration was given for a public appeal to raise funds to purchase new ground or for the enlargement of the existing grounds of the Belfast Charitable Society, who had the power to enlarge it. Another idea put forward by Dr Drew was for the setting up of a joint stock company to enable investment and the purchase of a new land as a burying ground, accepting that regulations for purchasing burial ground were strict and bureaucratic.  But Dr Stevelly clarified that without an Act of Parliament a number of people could not establish a public cemetery by voluntary subscription.

In the meantime expedient practical measures were adapted for the digging of deeper graves and large pits for the burial of large numbers of deceased in the various cemeteries in the town. This practice continued to 1849 where a mass pit for victims of the cholera epidemic was used for the burial of hundreds of deceased, known as Plaquey Hill at Friar’s Bush Cemetery. Similar mass graves for many hundreds of cholera and fever victims were also dug at the Clifton Street Cemetery and Shankill Cemetery, with the dead buried in mass unmarked graves remaining as ‘unknown’. At the Shankill Cemetery exhumations in large numbers of older burials were resorted to and the coffins and bodies burned to make way for fresh burials.

The Newsletter in its report of the Public Meeting at the Town Hall on August 23th 1847 gave a graphic and horrendous account of the practices that cemetery staff had to resort to, including the physical destruction and obliteration of dead bodies already interred in the ground at Shankill Cemetery to make room for fresh interments.

Dr Drew had stated in support of obtaining new burial ground that, “He knew himself that they were very badly off for burying ground, for he had seen the way Shankill graveyard was choked up with the dead.  The system of breaking up skulls, and sinking spades in the coffins, and dead bodies, rendered it intolerable in any Christian community, and actually pestiferous to the ministers and priests who had to perform the offices for the dead in it.”