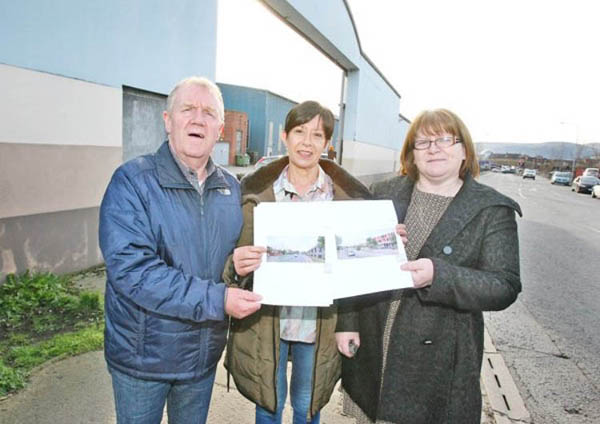 SINN Féin Councillor Mairead O'Donnell has called for the relocation of the Translink bus depot in Short Strand.

Cllr O’Donnell was speaking out after a worrying report complied by Queen’s third year medical students revealed a possible link between the number of cancer-related illnesses in the area and pollution emitted from diesel engines.

Cllr O’Donnell said that Sinn Féin, in conjunction with community and housing reps, are to call a public meeting to formulate a robust community-led campaign for the relocation of the Translink bus depot in Short Strand.

The meeting will be a follow-up to a very successful first meeting in April 2017 when Short Strand Partnership launched their proposal document for that site – ‘Short Strand Vision’,

Speaking to the Andersonstown News, Cllr O’Donnell said: “I believe that Translink first indicated their intention to relocate around 15 years ago. Sinn Féin has consistently raised the issue with both Translink and successive DRD and Infrastructure Ministers.

“The bus depot, which is currently nothing more than a glorified garage and parking area, is a substantial site covering approximately 3.45 acres which if brought back into community use could meet the growing housing shortage along with the provision of much-needed facilities.

“People within our area have been sitting on housing waiting lists, some for years, as either first time applicants or housing transfer as their current property no longer meets their needs. I am aware, first-hand, of the difficulties faced by those seeking housing with people young and old seeking help in terms of their housing needs. A vast majority of these applicants are deemed in housing stress and or full duty applicant homeless.”

Along with addressing housing shortages, Cllr O’Donnell along with her team have also identified several other areas of concern.

“We have identified a youth/health/wellbeing deficit within the area. There is a specific lack of leisure resources for residents of Short Strand and surrounding areas and this was exacerbated when Maysfield Leisure Centre was closed several years back without any meaningful accessible alternative provision being made.

“Youth provision within the area is provided by a first class team of youth workers but facilities are no longer fit for purpose, with user numbers outgrowing the youth club building that is open seven days a week.”

“On top of all of this, a concern of mine is the high levels of cancer-related illnesses within Short Strand. Reports compiled for Short Strand Partnership by QUB third year medical students suggests linkages with cancer-related illnesses and pollution emitted from professional diesel engines and that these are highest in Belfast and indeed ranking number two in all areas across the north. As Translink bus depot is the only industrial activity within the area, I believe these linkages could be attributed to Nitrogen Dioxide and Particulate Matter. It is wholly unacceptable that this community should suffer in such a way to accommodate a company that wishes to keep a fleet of buses in east of the city, when there are other locations such as Milewater Road or Glengall Street,that could provide the same service. We feel that we have exhausted all avenues thus far and feel that only a community led campaign can now exert the maximum community pressure to ensure the depot is relocated and that the land then brought back into community use. This is a once in a generation opportunity to make a difference and we are asking people to join in this campaign. We will be seeking to set up a committee with concerned residents to help us realise these plans. Anyone wishing to join this committee please contact myself so that we can push forward on our vision for this site and create a space for much-needed homes along with a facility which will provide this community with long term benefits in terms of youth health and well being.”

“Ongoing investment in modern buses means that many of our Metro fleet at Short Strand feature Euro 6 engines – some of the most environmentally-friendly vehicles in the region.

“The depot is a major local employer with over 200 staff. In addition to providing essential transport links within the Greater Belfast Area, it’s the workplace of many local residents which has been the case since it opened back in October 1950.

“Its location is aligned closely with the nature of the service it provides, enabling efficient and economic service delivery. There are no plans to relocate and we have been continuing to engage directly with local community representatives to discuss the matters raised.”