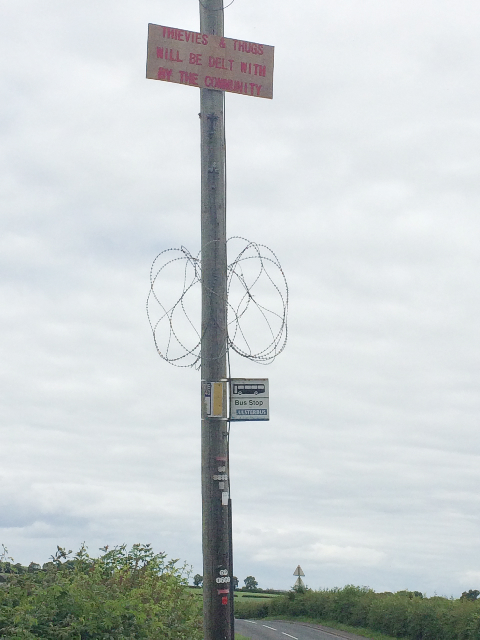 A LOVELY and lengthy Sunday afternoon stroll through rural County Armagh on Sunday. 16 miles according to the health app on Squinter’s mobile phone, which is good going but by no means a record.

Here’s a telegraph pole on the Loughgall Road between Armagh and, ah, Loughgall. And there’s a barbed-wire-protected sign written in blood-red paint at the top: ‘THIEVIES AND THUGS WILL BE DELT WITH BY THE COMMUNITY’. It’s a sobering dose of urban reality in the midst of such rural serenity – more like something you’d expect to see in the teeming housing estates of Belfast or Derry. But what’s a ‘THIEVIE’? Is that the same a thief, or is it an underage thief or a thief for whom you’ve a wee bit of grudging affection? And when the ‘community’ gets its hands on the raiders, with what sanctions will the guilty be ‘DELT’?

Lot of money up the country, of course, so it shouldn’t come as much of a surprise that rural crime is one of the biggest challenges facing police north and south. As well as life-savings stuffed into waterboots (‘Ah don’t thrust them banks, hi!’), you’ve got expensive farm machinery, sheds and barns chock-a-block with all kinds of sell-onable tools, firearms, chainsaws, quadbikes. It’s like an open-air Joe Kavanagh’s, for flip’s sake. Except without any Trevors about.