Soccer: Round Two of the Intermediate Cup for local sides 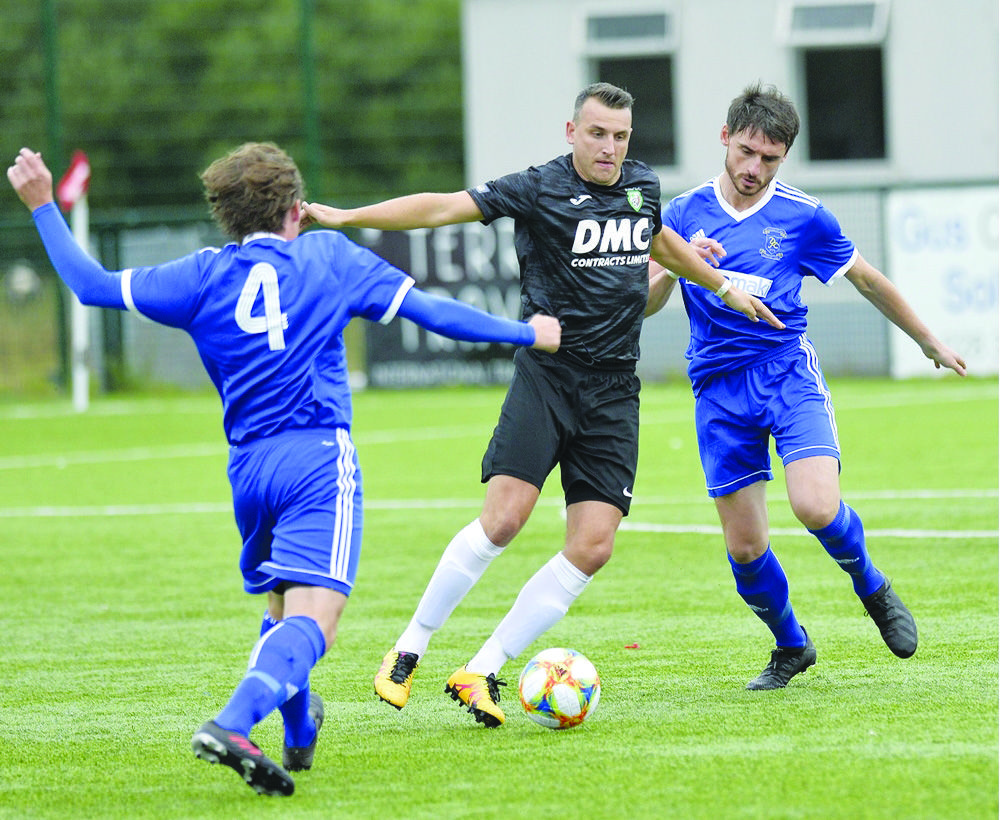 ST James’ Swifts manager Barry Johnston believes his current squad are more than capable of ending the season with silverware and is hoping for another extended run in this season’s Intermediate Cup.

They are up first for this weekend’s round two fixtures with a trip to Seaview to take on Crusaders Reserves on Friday night (8pm).

The Swifts were semi-finalists in the 2019-20 competition and lost out to eventual champions Dollingstown with their run to the last four earning them an invite to last season’s 32-team Irish Cup.

Johnston’s men are currently top of the Ballymena and Provincial Intermediate League and that’s their main focus this season, but they’re determined

“The league is our priority, but the Intermediate Cup is massive for us,” stated Johnston.

“We’d a good run in the last competition and we beaten in the semi-final by Dollingstown.

“That got us into the Irish Cup. It means something to us and we’d like a bit of silverware for this current team.

“We are a young team, but we are ambitious and the Intermediate Cup is one of the competitions we’ve prioritised.”

In his role as a coach with the Football Management Company, Johnston comes into contact with several up-and-coming players, including those from Crusaders.

His attempts at harvesting some information from Friday night’s opponents failed, but the Swifts boss already knows his side will be in for a tough battle against the pacesetters of the NIFL Development League.

“We coach kids from NIFL every day down at Windsor Park,” added Johnston.

“I know a couple of their players, Cory Burns and Kyle Kelly – they are very good players.

“I’ve been trying to get as much information out of those two as I can, but they are being good professionals and not telling me a thing!

“We know they are a good team and they are unbeaten in their league. They’ll have a few first-team players down because it is on a Friday night so we are expecting to come up against a very strong team.”

As champions of 2019, Crumlin Star will also be keen to reach the latter stages of the competition and they are in action on Saturday afternoon (1.30pm) at Seagoe.

After that, the North Belfast side’s focus will swiftly turn to Wednesday night’s Border Cup semi-final meeting with Rathfriland Rangers (Seaview, 8pm) and manager Paul Trainor feels his side are returning to form at just the right time.

“It is the Intermediate Cup and we are taking it seriously. If we win this, we are into the last 32,” said Trainor.

“Over the last few weeks, we’ve been scoring a lot of goals.

“Since the Newington game in the Steel and Sons Cup, which went to extra-time, we’ve done very well.

“We are starting to fall into the old groove and playing well and not giving too much away defensively.

“It is great to playing at Seaview round Christmas and you’ve your family down and you get big crowd at the games.

“Rathfriland will be a very tough game and they are one of the better teams in the Amateur League.

“This Saturday, we play Seagoe in the Intermediate and we wouldn’t know much about them to be honest. They are top of the Mid-Ulster ‘B’ league so they know how to win games.”

Meanwhile, Newington will be hoping to continue their fine form in cup competitions when they take on Richhill FC in the second round on Saturday.

Paul Hamilton’s side claimed a stunning 5-3 win after extra-time against Bangor on Tuesday night to reach the final of the Steel and Sons Cup.

Goals from Aodhán Gillan and Gary Warwick had Newington ahead, before Bangor levelled the game before half-time via Michael Halliday and Ryan Arthur.

The Seasiders then took the lead early in the second half with Arthur bagging his second, but skipper Richard Gowdy forced extra-time. A brace from substitute Daire Rooney was enough to book a trip back to Seaview on Christmas Day.

“Intermediate Cup this weekend and that’s good because we have a good squad of players and we will give people the opportunity to come in and play,” said Hamilton after Tuesday’s win.

“You saw there the boys put 110 minutes in and have come off the pitch shattered. That’s what we ask of them every week - to bring that intensity, strength and heart.

“Heart won us that match and we can’t ask for any more. We have a great bunch of lads who all work hard so they are getting their rewards for their work, which is all we want for them.”

Colin Valley have been drawn to face either Linfield Swifts or Dunmurry YM in the second round, but it is unclear whether or not Saturday’s game will go ahead.

Dunmurry defeated the Swifts on penalties in the first round at Midgley Park, but it emerged that the referee on the day made a mistake in taking the game straight to a shoot-out instead of playing extra-time first.

Dunmurry issued a statement saying they won’t agree to a re-fixture and it is unclear whether the IFA will seek a resolution between the clubs.