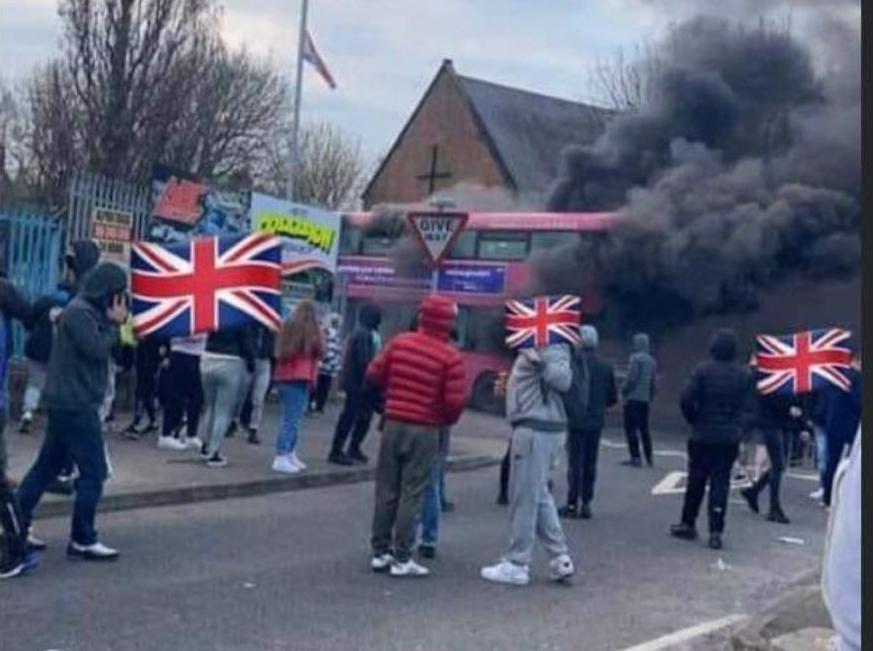 Residents of the Springfield Road are hunkering down for a difficult night after loyalist mobs breached the gate at Lanark Way and attacked homes and cars.

Video footage shows a gang of loyalists rampaging through the Lanark Way gate with one youth apparently brandishing a machete. The crowd drew back to the Shankill side of the peace line on the order of one of their number but the gate, which is closed electronically by police, remained forced open.

Notice of the loyalist gathering at Lanark Way was communicated via social media from early afternoon.

Crowds of nationalist youths from across Belfast are engaged in stone-throwing with loyalists, making the situation even more volatile, say locals.

While the police have ventured into the area, efforts to create a sterile zone on the Springfield Road have so far proved fruitless.

West Belfast MP Paul Maskey called on nationalist youths to stay away from the area. In a Facebook post, he said it was "crazy and pathetic" to call loyalists out to protest on a peace line. "This is a consequence of a lack of leadership from unionism and from loyalism. This has to stop and they need to step up to the mark and call the people off the streets who are rioting here this evening."

Clonard Sinn Féin councillor Claire Canavan, who was with colleagues on the scene, said locals were fearful of "things really kicking off". Speaking just after 9pm, she said: "I can assure residents that we are on the ground and liaising with the police to ensure the community is kept safe. I would appeal for calm and for young nationalists who don't live in the area to stay away. At this stage, we expect to be here into the morning if needs-be. Those who drew these loyalists onto a very sensitive interface for this so-called protest have a lot to answer for."

Masked loyalists petrol-bombed one bus and tried to hijack a second while police came under sustained petrol bomb and bottle attack.

Sickening that a @Translink_NI bus was hijacked & attacked in West Belfast tonight & some services have had to be suspended to protect our drivers & passengers.Thankfully no one was hurt in this incidence, but those responsible for this & ongoing attacks on the PSNI need to stop.

In the early evening, a large group laid siege to the Lanark Way peace line gate which was closed shortly before trouble erupted. At one point, loyalist youths stormed up the Springfield Road but were chased back into the Shankill by police.

It is believed, the gate was breached shortly after nightfall.

This isn’t peaceful protest this is a deliberate & organised attempt to stoke up sectarianism & violence. Unionism/Loyalism need to step forward and call people off the streets.

Belfast Telegraph photographer Kevin Scott was set upon by two masked men, beaten up, threatened and had his camera equipment damaged.

Condemning the attack on the cameraman, DUP leader Arlene Foster said "there is no justification for violence and it should stop".

However, even as Springfield residents braced themselves for a worrying night, attention was turning to the Donegall Road where loyalists have posted notices on social media calling on followers to assemble at 6pm on Friday and march into West Belfast.

This is not protest. This is vandalism and attempted murder. These actions do not represent unionism or loyalism. They are an embarrassment to Northern Ireland and only serve to take the focus off the real law breakers in Sinn Fein.
My thoughts are with the bus driver. https://t.co/2JRcOb6s8C