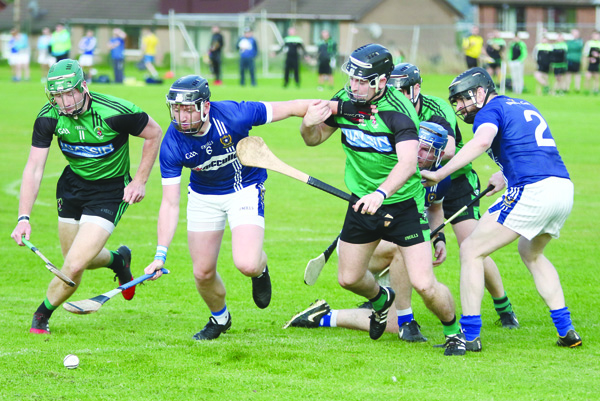 HAVING overcome St Gall’s in their rearranged quarter-final at Rossa Park last night (Wednesday), Sarsfield’s turn their attention to Saturday evening and a meeting with St Enda’s for a place in this year’s Antrim Intermediate Hurling Championship final.

The Paddies were 0-18 to 1-10 winners over their local rivals in front a big crowd at the Shaws Road venue and looking on were some of the St Enda’s team and management, there to run their eye over their opponents for this weekend.

As it was, Sarsfield’s had the extra quality to advance and St Enda’s coach, Niall Cormican says his players can expect a tight battle this weekend against a team they are yet to face in the league this term.

“It’s the same every year, you’re up for Championship,” he said. “We’ve prepared for it and will be up for it on Saturday night. “We know them well. We played them twice last year (in the league). We know what they are about and they know us, so we’ll see how it goes.”

On Wednesday night, it was Sarsfield’s who simply had too much firepower for a St Gall’s side that scored just one point from play through Tomás Ó Ciarán on 49 minutes, with Ó Ciarán scoring all his side’s points bar their final score which came from a Conor McGourty free after the Milltown Row’s star performer was forced off injured late on. Sarsfield’s wasted no time to settle with Darragh McGuinness winning the throw-in and racing through to point after just 10 seconds and they added points from two Kevin McKernan frees although they could have been further clear, but for some wayward shooting.

Ó Ciarán brought St Gall’s into the game with a free on 14 minutes and a minute later, he put his side into the lead when blasting home a penalty despite the best efforts of David Ward and added a further free just after. He was to add two more after Donal McKernan hit back at the other end, but Sarsfield’s finished the half stronger with Donal McKernan, Kevin McKernan (two) and Michael Callaghan pointing to leave them 0-8 to 1-4 ahead at the break.

The sides went score-for-score in the third quarter of the game before Sarsfield’s broke the sequence with back-to-back points from Niall McKenna and Kevin McKernan before Ó Ciarán hit that solitary score from play for St Gall’s. McKernan replied with a free to leave three in it with the game approaching injury-time when Conor McGourty looked to have a glorious chance for goal, but his shot was blocked and from a 20 meter free just after, he elected to point with Ó Ciarán off injured.

Sarsfield’s finished stronger however, with Kevin McKernan, Daniel McKernan and McGuinness pointing to seal a deserved win as St Gall’s centre-back, Niall O’Neill was sent off for a second yellow to compound a bad night for his side.

“We are happy to get the win,” said Sarsfield’s boss, ‘Keevo’ McKernan. “We would have taken a one-point win, so it’s job done. We put in a lot of hard work and preparation for this since last November so we’re happy.”

Sarsfield’s have little time to let their players recover ahead of Saturday’s semi-final. Their selector, Danny McCavanagh expects they should have everyone available and is expecting a tough game against St Enda’s, but one they feel they can win should they perform.

“St Enda’s will be another big game, but hopefully over the next few days we will get the boys into the cold baths and get them out again to get ready. I think we have the hurling in us to beat anybody. “I would hope we have the beating of them, but then it’s Championship so everything is at stake. We need to put everything we have into it. “It’s all on the day, but on the day we have the players to beat anyone or lose to anyone. It’s down to us.”

Sarsfield’s have undoubted talent in county stars such as Niall McKenna and Daniel McKernan, while Kevin McKernan was recently part of the Antrim set-up and is a leading light for his side, but St Enda’s have quality themselves in Joe Maskey, Ruairi Diamond and John McGoldrick – who top-scored in their quarter-final win over Lámh Dhearg – as their underage development starts to reap the rewards.

St Enda’s did have several players in action last night as their dual players lined out for the club’s footballers in a crucial league game against St Brigid’s they won 5-12 to 0-8 to keep their promotion hopes alive.

Attention will be fully fixed on the small ball this weekend however, as the Glengormley side look to return to the final and they will hope they can go one step further this term having been pipped at the post by Cloughmills in last year’s decider.