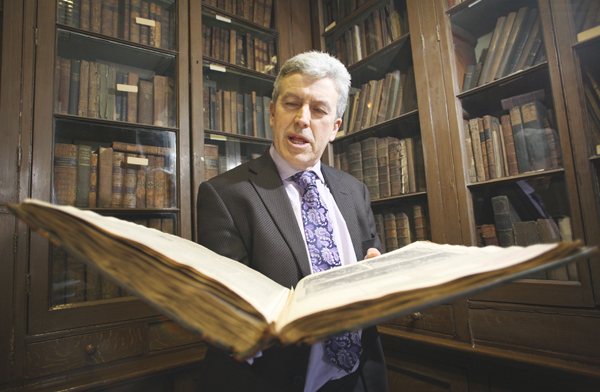 The 1916 Rising’s links to education, and particularly Patrick Pearse’s involvement in Dublin’s St Enda’s College, have been celebrated since the establishment of the Irish Republic as playing a key role in the decision to launch the Rising.

But as plans are made to commemorate the events of Easter 1916, a number of documents have been uncovered that show St Malachy’s College in Belfast can claim equally strong links to some of the most influential men to take to the streets to fight against British rule.

The school has recently been given a Heritage Lottery Fund grant to develop its impressive archive, because within its pupil records lie the names of some of the most famous men to be associated with the historic events. Archivist Gerry McNamee says they are currently trying to piece together information on all those involved.

“By and large, people forget we have a strong connection with the Rising,” said Gerry. “Mostly it’s with people who were involved with the more cultural side of things rather than the guys who got involved militarily, but the links are there. One of the key figures in this is Eoin McNeill.”

McNeill was founder and Chief of Staff of the Irish Volunteers but he was sidelined before Easter because he was known to believe it was too soon to launch an armed insurrection. He issued a stand-down order ahead of the planned Easter Monday call to arms, which is believed to have limited the number of people who took to the streets.

“Eoin McNeill was from Glenarm and boarded here in the 1880s,” said Gerry. “He was an extraordinary student. He was very, very gifted and while he was interested in the Irish language he didn’t learn it here because there was no Irish taught in the school in the 1880s. He was here for seven years, which is a long time, and during that time he obtained his degree because you had a system where the school was recognised as an awarding body. It was only when he left he got involved in the Irish language and formed the Gaelic League with Douglas Hyde and recruited people like Patrick Pearse to that organisation.”

When McNeill boarded at the school he was a classmate of John McBride, who was to emerge as one of the most prominent physical force republicans, later executed for his role in the GPO. Student record books show they shared a class in July 1882.

“It’s only relatively recently we’ve discovered John McBride, who was executed for his part in the Rising, came here too,” says Gerry. “It’s extraordinary that he’s a former pupil because he comes from Westport in County Mayo and you have to ask yourself, what was he doing coming to school in Belfast?

“But the key is in the name. McBride is an Antrim name and his father was a sea captain who set up a bar in Westport but sent his sons to be educated here – Anthony and John. We have better records for Anthony because John left St Malachy’s after only a year as far as we can make out. He did come back for a period too, which is also strange, so he had two stints here. Between his two stays here he went to Castlerea in County Roscommon where he worked in some kind of a store that sold pharmaceuticals.

“It’s thought he was radicalised in that time and after coming back here he went to Dublin before travelling to South Africa where he fought with the Boers during the Boer War.”

Other less prominent ex-pupils of St Malachy’s were also to take part in the Rising.

“After McNeill and MacBride attended you had people like Patrick McCartan from Carrickmore in County Tyrone who also boarded here. There’s a note in his pupil records that say he left because of emigration to America. He moved to Philadelphia and while there got involved in fundraising for the IRB and actually became one of their chief fundraisers, eventually sitting on their council. He came back and was in Belfast ahead of 1916 where he probably would have been their top man in the north.”

Of all the former St Malachy’s pupils involved in the Rising the best account of those days is given by Dr Charles J MacAuley.

Dr MacAuley, although not a Volunteer, was in the GPO after the rising to administer first aid and was on first name terms with all the leaders, including Eamonn de Valera and Joseph Mary Plunkett, who was his patient. MacAuley documented his role in the rising in a fascinating document available online in the Irish Military Archives.

In his account of the time, he records how in the weeks preceding the Rising he had given first aid lectures to the Volunteers. He was known to be sympathetic to their cause.

In post-independence Ireland another former pupil was to come to prominence. Sean McEntee was an IRB man who joined up in Belfast and mobilised in 1916. When he left St Malachy’s he moved to Dundalk where he worked as an electrician. It was from here he travelled to the GPO for the Rising.

He was later to be a member of de Valera’s first Fianna Fáil cabinet and, along with Falls Road man Joseph Connolly, was one of two former St Malachy’s pupils to be in charge of ministries during that term.

Joseph Connolly wasn’t active on Easter Monday. On the orders of Eoin McNeill he travelled to Drogheda and Belfast to order the Volunteers to stand down and disregard Pearse’s call to arms.

Patrick Pearse and Michael Collins have no direct links to the school, but letters from them have found their way into the college archive.  The Pearse letter, written entirely in Irish, was sent to a friend in Belfast on February 24, 1916 – just weeks before he stormed the GPO. In it he details plans to come to Belfast for a day to organise the Volunteers. The Collins letter was sent in 1917 in his capacity as Director of Finance in the first Dáil and deals with compensation payment claims.

“These letters were donated to the school by a former teacher, an tAthair Seosamh Mag Uidhir, but we don’t know who they were sent to.”

Last June the Heritage Lottery Fund donated £600,000 to develop the collection in the historic old school building and – fittingly in this centenary year – it is expected the 1916 documents and the accounts of the remarkable men who went to the school and took part in the Rising will form a centre point of the display.