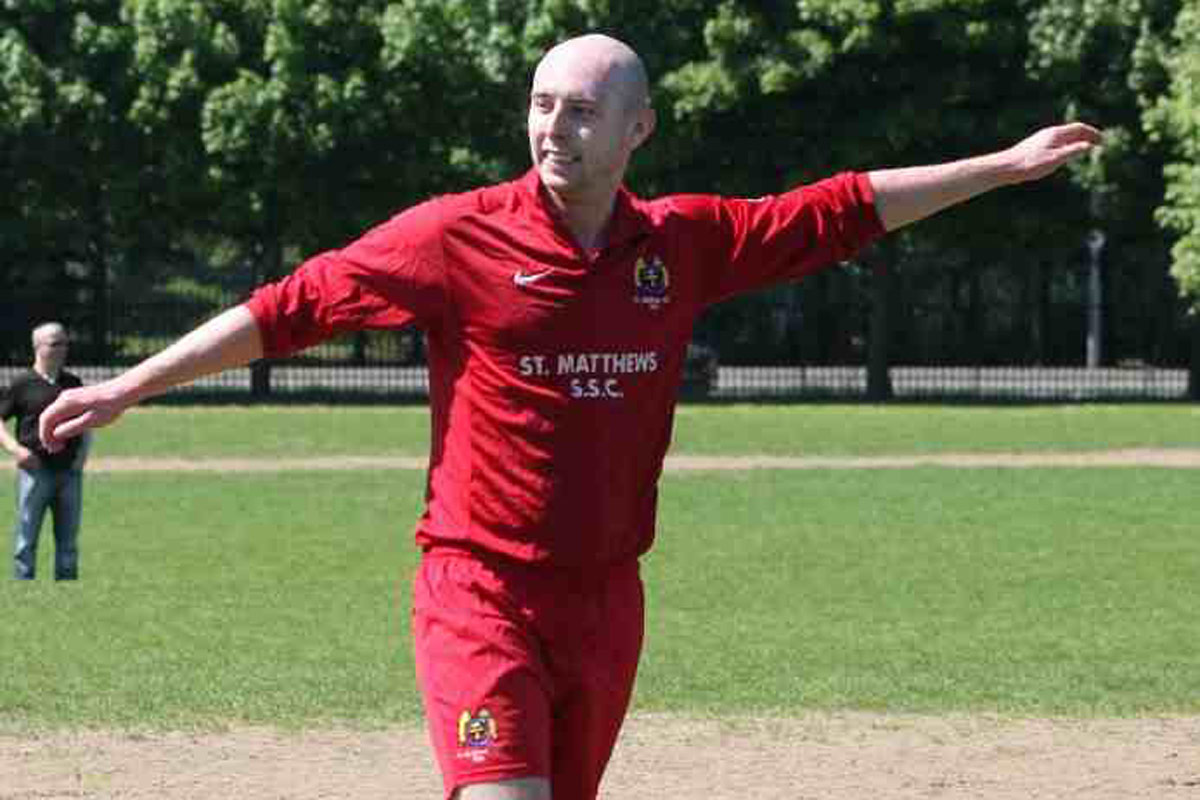 St Matthew’s recorded another great win on Saturday, recording their third win in a row.

The team has been scoring goals for fun with 17 goals scored and only four conceded.

The game was edgy until a well-worked corner from Paul Prigent allowed Ciaran Boyle to smash home the opener.

The management were forced into an early sub when McCrory came off with an injury to his ribs. He made way for Ciaran Curran to make his first appearance of the season after a knee injury.

Shamrock were back level within two minutes with a great left foot volley from their striker. Steven Black put St Matt’s in front just before half time with a neat finish under the keeper. Half-time: 2-1 St Matt’s.

St Matt’s made another substitution in the second half bringing on Michael Leonard for Stephen Napier.

The St Matt’s midfield pair of the Prigent brothers, Paul and Liam, started to take control of the game and it wasn’t long before the ball was in the net again with Black getting his second of the game.

Then the floodgates opened with Boyle getting his second before coming off injured for Sean McVeigh.

Black then completed his hat-trick and Seamus Fitzsimons grabbed a brace in the last five minutes.

The management team of McGuigan and Carlisle were very pleased with their team’s fast passing, attacking game that has helped them climb to the top of the Belfast & District Premier League.

A great team performance made sure St Matthew’s enjoyed their first win of the season and kept their unbeaten league run going to three games now.

After a 4-4 draw with Blackieville last week the return leg was never going to pan out the same with St Matt’s blowing a 2-0 lead last week.

Paul Smyth got St Matt’s off to a great start, finishing off a flowing moving involving Richard Gowdy and team captain John Michael Ward who released Smyth through one-on-one and he slotted the ball past the keeper.

Sean McMahon got the second with Anto Meighan scoring the third just before half time.

Curtis McManus replaced Richard Gowdy and was involved straight from the kick off, sending in a great cross to the six-yard box.

With the Blackieville defender under pressure he forced the ball into his own net.

McMahon added his second of the game before Anto Meighan converted his second to make it seven in three games for the lighting quick winger.

Terrance Ward and Caimhin Corr replaced the hard working Conor Norwood and John Michael Ward. Blackieville grabbed a consolation goal in the dying seconds but the St Matt’s management team of Seamus Walsh and Phillip Rooney were delighted with the team performance and in particular the centre back pairing of Patrick Smyth and Ciaran Hargey who were superb.