Stephen set to meet his hero 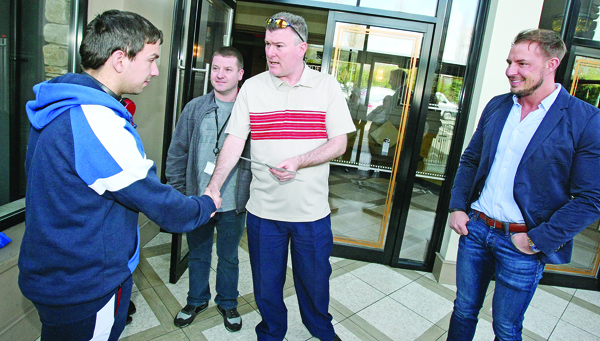 THERE were big smiles all round on Friday as Stephen McAllister was told he was going to get the chance to meet his hero.

Last week we reported how the 22-year-old with learning difficulties was viciously set upon and attacked in broad daylight outside the Beehive bar on his way to play a game of pool.

Stephen sustained facial injuries and required stitches to his eye and staples in his head. During the course of our interview Stephen remarked that snooker legend Ronnie O’Sullivan was his hero and that he was due in the Devenish in June to play an exhibition game and how it would be his dream come true to meet him and maybe – if he’s lucky – play him a few frames.

As soon as the Andersonstown News hit the streets we received a call from Eamonn Christie who happens to be promoting Ronnie O’Sullivan’s Devenish exhibition.

Eamonn said: “I spoke with Ronnie late last night as soon as I read the Andersonstown News and his immediate response was “get him to the show”. He was genuinely touched and upset over what happened to Stephen.

“What happened to that young lad was a terrible travesty and hopefully there can be a happy ending.

“Ronnie didn’t even hesitate, he is looking forward to meeting Stephen. Jim Conlon from the Devenish was also straight on to me to get this set up, so as well as meeting Ronnie, Stephen will get to meet Mark Allen and we really hope he has a good time, and of course he will have front row seats at the exhibition.”

Stephen’s delighted sister Caitlin said: “This is the first time in my life I have seen Stephen speechless. He thought he was going to the hospital to get his stitches out, but instead he got his Ronnie O’Sullivan tickets.

“He gave them straight to our granny for safe-keeping and every day he asks ‘how many more sleeps?’ He is so excited and this has really picked him up after the terrible ordeal he suffered.”

Caitlin added: “Everyone has been so good and kind and I can finally see my brother getting back to himself, he has been through the wars, but he’s coming out on the other side. I just want to thank everyone for their kind words and efforts in making Stephen’s dream come true.”