SQUINTER: Sweet Caroline turns a bit sour for the Beeb 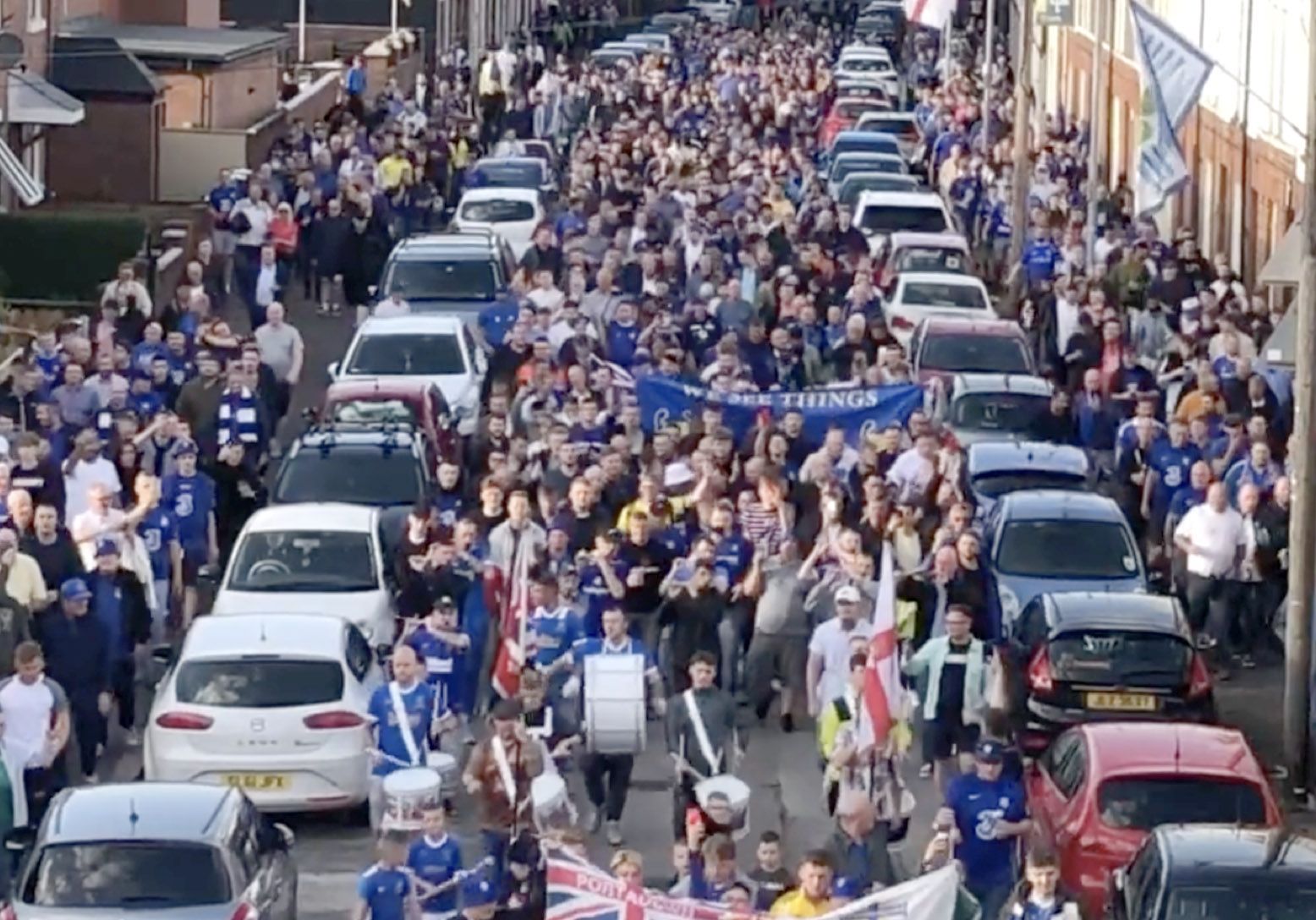 BAND AID: Chelsea fans are shown the way to Windsor with flutes and drums

IT seems the UEFA Super Cup final between Chelsea and Villareal at Parc de Windsor last Wednesday night was a stunning success for Our Wee Country. Or at least, that’s the way BBC This Here Pravince saw it.

A celebratory edition of Talkback on the wireless on Thursday excitedly and breathlessly took us through every aspect of a red letter day for local tourism, inviting figures from the hospitality sector on to tell us why the match had single-handedly revived the industry’s failing fortunes and why the unforgettable event meant that a border poll is now but a distant dream. (Squinter’s willing to admit he may have imagined that last bit amidst the din of the cheers and the trumpet blasts.)

And yet social media on Wednesday evening and Thursday morning was dominated by one Super Cup story – and it wasn’t the one about Chelsea fans being led to Windsor by a loyalist flute  band, which somehow escaped the programme’s attention.

It began with a clip somebody put up on Twitter of a feature piece on BBC Newsline at teatime on Wednesday painting an idyllic picture of Chelsea fans arriving in Belfast city centre for the big game. After some boilerplate interviews with Chelsea fans (“Uwstah froi? Cushty!” “Behfawst? Lahvly, lahvly peepow.”) and some standard soccer chanting, the voiceover told us: “Nearby, a more familiar song was being sung.”

Or at least, that’s what Squinter heard loud and clear – and that’s what was heard by many people expressing surprise and even shock on social media that such a thing made it on to the local BBC’s teatime news,which is usually about as edgy as a Hugo Duncan roadshow.

As the controversy gathered pace, Ormeau Avenue decided that an intervention was required in order to assert some control over a story that was galloping away from them. And in very short order a missive from the second most important man at BBC Ulster after Nolan was delivered to the waiting masses.

“We are confident that there was no audio of swearing on our programme tonight. However, we accept that we cannot be sure of the intentions of everyone in the video and for that reason we will not run the clip again.”

Having worked in this business for 30 years-plus, Squinter has extensive experience of statements, and for a two-sentence effort there’s a lot to unpack there. The first thing to say is that absolutely nobody was complaining about the word ‘f**k’ allegedly being sung on TV.

Swearing was not the issue. What they were complaining about was quite simply the sectarianism of those in the gazebo they believed to have insulted the head of the Catholic Church on the local news. And yet the BBC had decided that a four-letter word was the issue at hand. And then there’s the ‘confident’ question. Merriam-Webster defines confident as “Full of conviction, certain.” Dictionary.com offers “Having strong belief or full assurance; sure.” So even though the Beeb were and are all of the above about swearing in the clip, they won’t be running it again. Got that? Good.

Not surprisingly, the response got short shrift on Twitter and it wasn’t long before those making complaints about the incident were being sent a much longer and much more detailed response to Gazebogate (Carolinegate? F**kgate? Popegate?). Squinter has read it a few times now and while there are many things that still have him scratching his head, the third paragraph was a doozy. “The sequence was reviewed by the reporter, picture editor and programme producer prior to transmission. It was also monitored at the point of broadcast by senior editors. No sectarian or offensive language was heard and we are confident this will have been the case for our viewers as the programme was going out.”

Squinter has no issue with the details of process outlined here and of course he accepts the assurance that none of the people involved in the decision to broadcast heard any sectarian or offensive content. But when Auntie assures us she’s “confident that this will have been the case for our viewers as the programme was going out” then Squinter can only cry “Wha’?”

Not “most viewers” or “many viewers” or “some viewers” but “this will have been the case for our viewers”. The very fact that this second statement went out in response to complaints is an acknowledgment that some viewers discerned sectarian or offensive language in the singing – the confidence of BBC Ulster bosses notwithstanding.
So added to a requirement for the BBC to be sure of the intentions of people who appear on screen, is a declaration that the BBC is magically confident of the attitude of viewers to content.

Which brings us to the end where for some reason a decision was taken to tweak the narrative. “Following the broadcast we reviewed the video again and came to the conclusion that while we could not hear any offensive language we could not be absolutely certain of the words sung by everyone who was filmed in the marquee.” So after a meandering journey, confidence has morphed into uncertainty. Or at least, Squinter’s confident it has. But he’s not absolutely certain. Or something.

Just jump up on the couch, please, will you?

THINK of it as free therapy. Here’s Squinter’s patented personality test to help you check where you’re at as we slowly emerge from the latest lockdown. Make sure to answer all 50 questions honestly – the test is cunningly designed by top psychologists and psychiatrists to root out poseurs and spoofers, so just be you. Crack on to the end, where you will find out all you need to know in order to make yourself a better person. Or indeed a worse one...

A. HP sauce.
B. Heinz ketchup.

A. Dressing gown.
B. Housecoat.

A. Not tattooed.
B. Tattooed.

A. Semi-skimmed milk.
B. Full-fat milk.

A. Ballycastle.
B. Newcastle.

A. Gutties.
B. Trainers.

A. TUC.
B. Jacob’s cream
crackers.

A. Self-catering.
B. Hotel.

A. Black pudding.
B. White pudding.

A. Beans on toast.
B. Cheese on toast.

A. Clothesline.
B. Rotary line.

A. Dinner on the knee.
B. Dinner at the
table.

A. Brown bread.
B. White bread.

A. Johnny Hero.
B. Frank Mitchell.

A. Custard cream.
B. Digestive.

A. Cornflakes.
B. Weetabix.

A. Sparkling water.
B. Still water.

A. Fried egg.
B. Scrambled egg.

Mostly As: You’re a well-rounded individual and well-equipped to deal with whatever might come your way in the weeks and months to come. You’re most likely also very good-looking and wonderful company. Keep doing what you’re doing.

Mostly Bs: Not going to lie here, you’re going to have to change your ways and how you live your life, chum. Jacob’s cream crackers? White bread? Frank Mitchell? Is this you? Have a word with yourself, then pull your wellies on and clear off.