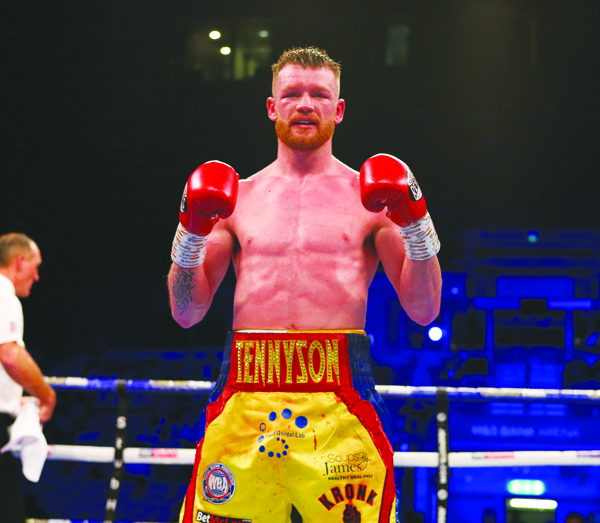 JAMES Tennyson’s quest to force his way into the world lightweight frame has received a huge boost as it was confirmed today (Tuesday) he has signed a promotional deal with Eddie Hearn’s Matchroom Boxing.

The big-punching Poleglass man is set to fight for the British title next following his impressive stoppage win over Craig Evans back in November although the identity of his opponent is yet to be determined with holder Joe Cordina expected to vacate following his move down to super-featherweight.

Whoever that may be, victory could pave the way for the 26 year-old to jump back into the world title mix following his unsuccessful bid to claim the IBF super-featherweight title against Tevin Farmer in Boston back in October 2018.

That came after he dethroned European and Commonwealth champion Martin J Ward on one of six appearances on Matchroom cards on both sides of the Atlantic.

Since that defeat to farmer, Tennyson has score four straight stoppage wins up at lightweight including his last outing coming at Liverpool’s Echo Arena when he stopped Craig Evans in a British title eliminator.

His performances on big Matchroom and Sky shows have been enough to prompt Hearn to give him a promotional contract that will boost his chances of securing huge opportunities.

“Over the last couple of years, I have had a good relationship with Matchroom and all the big titles I have fought for and won have been on Matchroom shows,” said Tennyson.

“Without the opportunities they have given me I wouldn’t be where I am today and I feel this move will bring me back to world level boxing which is where I want to be.

“2020 is going to be a big and busy year for me and I look forward to being involved in some big fights. I have always been a puncher and I feel with my power I can mix it with anyone in this Lightweight division. Matchroom is at the top of the sport and I believe that with this deal I can be up there as well.

“I want to fight for World Titles, and I am confident Matchroom will take me to where I want to be. This is a huge opportunity for me and will bring me some huge nights. In time, I would love to bring some big nights to Belfast so at the moment I am just buzzing for the future.”

Hearn has been a fan of Tennyson’s all-action, exciting style and it was on a Matchroom USA show where ‘The Assassin’ took on Farmer for the title.

The move up to lightweight certainly looks to have been an astute switch as he looks bigger and stronger with these attributes not escaping the attention of the English promoter.

"James has been on an electric KO run since making the move up to Lightweight after his brave World Title challenge against Tevin Farmer in 2018, but in truth he is a different animal at 135lbs.

“The lightweight division is on fire at the moment and James has what it takes to throw his name back into the world title mix."

Tennyson’s manager, Mark Dunlop is delighted his man’s talent and dedication to the sport has started to pay of and he agrees that thee are exciting opportunities ahead.

“Both James and I are delighted to finally put pen to paper for Matchroom Boxing after impressing on all his appearances for them over the last three years,” he added.

“James has always looked up to Eddie for the wonderful opportunities he has bestowed on him in recent years.

“James is a dedicated and talented young man and will stop at nothing until he achieves his goal of becoming a world champion.

“At 26, James has an incredible CV having done everything the hard way – he has built up a tremendous resilience and will to succeed and I’m excited for the next chapter of his career.”