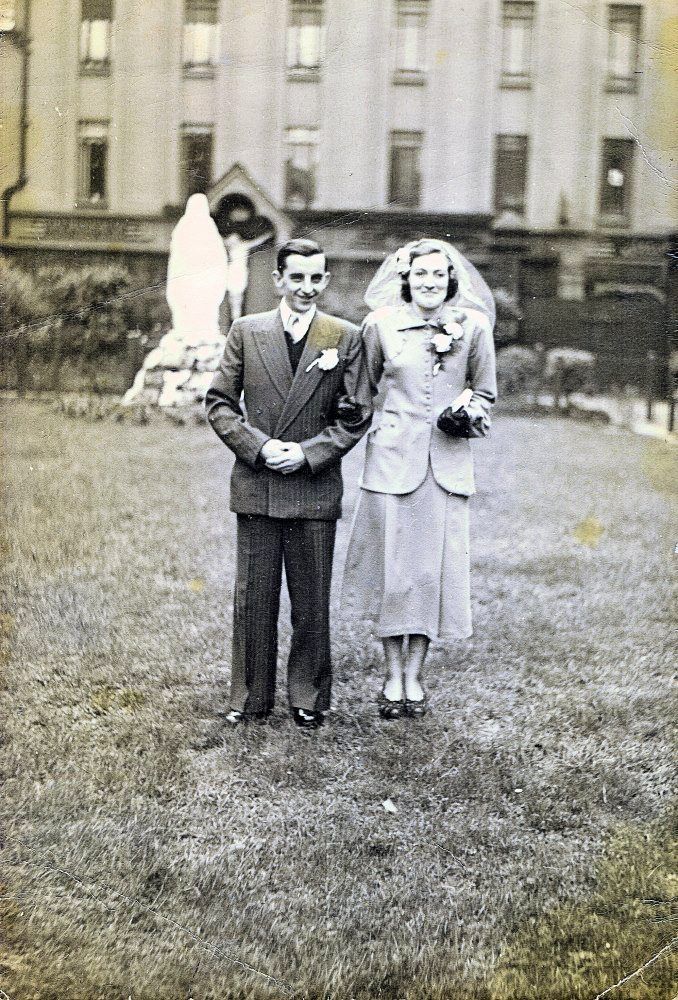 AN ENDURING STORY: Frank and Teresa on their wedding day; below, the Claddagh ring that Frank made his wife while he was in prison

On his parents’ seventieth wedding anniversay Ciaran Cahill tells a story of love, loyalty and friendship

MY father Frank Cahill, the son of a printer from 60 Divis Street, Belfast, met my mother, Teresa Baird, an orphan from Brown Street, at a dance. My mother told us that it was love at first sight, she knew he was the one and made it her business to make it happen. After a few years courting they married in St Mary's Chapel Lane on 26th December 1951. It was a double wedding, my father's sister May, married Sean Killen. Double weddings were a way to save money in those days.

My grandmother, Josephine Cahill, ran a drapery store below the print shop at 60 Divis Street. She supplied the material for the wedding outfits; not white wedding dresses, but wedding suits as was the thing at the time. My mother recalled that she wasn't too happy about the arrangement as she had her own ideas about her wedding outfit, but my grandmother was a strong woman and mother went along for a quiet life.

They had a wedding breakfast attended by family, friends, the great and the good. They lived in 11 Brown Street with my mother’s foster mother, Nellie Lee, and Nellie’s two sons.

In total he was imprisoned for eight years without trial or conviction. The first internment was 1943 and the third in 1971.

Nellie was a small woman with a huge heart, who raised my mother as her own. In fact, it was only before the wedding that she told my father, "You know I'm not Teresa's real mother.” It was never mentioned again.

Soon their first child arrived, Joseph, who was named after his grandfather. He was to be named Philip, but as he arrived on 2nd June 1953, the same day as Queen Elizabeth's coronation, my mother feared the Orange bands would be round in celebration of baby Philip. The same bands called to her home every 11th night to smash the windows while she, Nellie and her sons took refuge under the bed.

The second boy arrived in 1955 and was given his father's name, Frank, just in case they didn't have another boy. In 1956 the third boy would at last be called Philip.  After Nellie’s death they took up residence in 9 Hastings Street. Bridget Gallagher, or granny Gallagher as we knew her, opened her home and her heart giving them a room at the top of her corner house. Bridget was the grandmother of Frank Quinn who was later murdered by the Parachute Regiment in the Ballymurphy Massacre 1971.

On 9th September 1957 my father was arrested from that house and interned in Belfast Prison. This wasn’t his first nor his last internment. In total he was imprisoned for eight years without trial or conviction. The first internment was 1943 and the third in 1971.

On St Patrick’s Day 1958 the prison was in lockdown after the discovery of an escape tunnel. No-one was allowed in for visits, no food parcels in or laundry allowed out. Wives of the prisoners, including my mother, stormed the gates of the gaol and got through the first gate resulting in my three-year-old brother Frankie being left outside. The story made the national newspapers “Mothers Storm Jail Gates… Little Frankie Cahill Locked out Weeps.”

This period of interment was the longest, three years and seven months, but during his incarceration my father crafted a ring from a two-bob bit; a Claddagh ring, representing love, friendship and loyalty, for the one he loved, who was left with their three young boys, but supported by the Cahill and Gallagher families until his release in April 1961.

The ring resurfaced in our house after 30 years, prompting this account. The interesting thing is that the crown is absent, I think more to do with the lack of metal in the coin than the symbolism. On his release from prison two more boys would follow: Danny (1962) and Sean (1963) and a new house at number 1 Ballymurphy Drive. The problem estate that nobody wanted to live in became home to the Cahills, McGettigans, McCulloughs, Dixons, Gregos, Hannas, Gregorys, Grahams, McGlincheys, Arbuckles, Rosbothams and many likeminded families who set about changing the negative image of the estate.

The upstairs bedroom of Number 1 saw the arrival of three more boys Thomas (1967), myself Ciaran (1968), and Brendan (1970). Hope was fading for the arrival of a girl. The Troubles were at their height and the streets were in turmoil, but one last try was on the cards. Mammy was pregnant and due in December 1971, and Daddy was arrested and interned in August 1971. He would miss the birth of their ninth child no matter the gender. Due to the Troubles and the possibility of complications it was too dangerous to give birth at home, so when the time came Mammy went into the RVH maternity unit and on the 8th December 1971 their only baby girl, Ellen, was born.

BIRTH OF THE ONLY GIRL

News soon travelled to the ’Murph, the neighbours were in the street celebrating the birth of the only girl. No hand-me-downs from a house full of boys; frills and dills were the order of the day, and pink not blue was in order. Then to Crumlin Road goal, the wings echoed with the sound of "Boko's got a girl, Boko's got a girl" – Boko being my father's nickname. To this day I don't know why (any suggestions are welcome).

The family was now complete but it would be 18 months before they would be able to come together when daddy was released from Long Kesh gaol. My parents lived out their lives in Ballymurphy getting involved in various community development initiatives from tenants’ associations to co-operatives, all aimed at improving the living conditions and opportunities for their community.

This year would be their 70th wedding anniversary and from nine children came 29 grandchildren and 30 great grandchildren with more on the way. Not bad for the orphan from Brown Street and the printer’s son from Divis Street, who had a union of love friendship and loyalty.