The great outdoors at a local nursery school 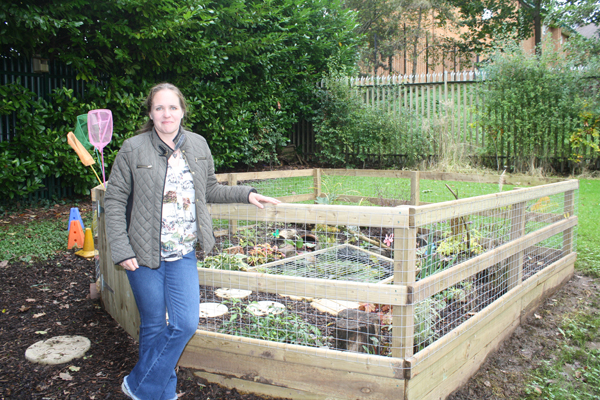 NATURE: Debbie Nelson at the pond in the eco garden at St Michael’s Nursery School

AIDAN Crean fully understands young people’s concern for nature and the future of our planet – in fact the west Belfast environmental supremo ‘got it’ well before anyone else did.

When he was young and with the Troubles raging all around, nature and the environment weren’t high on many people’s list of priorities. But Aidan was intrigued by the natural world – just like so many youngsters today – and when he was 11 his life changed forever when a simple thing happened – his father bought him a pair of binoculars so he could better study the birds he spent so much time watching in the gardens of Riverdale.

Those old second-hand binoculars were the catalyst that propelled him on a life journey that culminated this week in the opening of an Eco Wildlife Garden at St Michael’s Nursery School in Andersonstown.

The garden was a labour of love for Aidan and fellow wildlife crusader Debbie ‘Doolittle’ Nelson. Their plan to build a nature haven for kids – rather than a common play park – got the full backing of the school. Principal Clare McAllister said the children now choose themselves to go outdoors every day.

“They just love to be outside in the middle of nature – so many children don’t get the opportunity to get
outside. And I think this park will encourage children and parents to use our parks and public amenities more,” she said.

Board of Governors chairperson Sean Óg McGuinness said that even bad weather doesn’t deter the kids. “They just put on their wet gear and can’t wait to get out to play. It’s a nature paradise.”

Aidan and Debbie spent months designing and perfecting the garden – Debbie herself did all the joinery work, making the 42 bird boxes, as well as hedgehog havens in each corner and a wildlife pond.

“I planted giant water lilies for dragonflies to rest on, and just as I was putting them in during the summer a dragonfly flew by,” said Debbie. “So even though we’re in the heart of West Belfast there are still some rarities about here.”

Debbie even managed to allow pathways for hedgehogs to the fenced-off pond by cutting mini-archways into the fence.

“The pond itself has wee ramps so frogs and newts and hedgehogs can safely visit it,” she said.
And the nestboxes aren’t just to attract garden birds – one at the front of the school has been designed for kestrels. Aidan said: “You can just imagine the faces of the kids if a pair of kestrels take up residence here. It would be fantastic.”

In fact the boxes are designed to provide homes for seven other species – including swifts, robins, house sparrows, treecreepers and bats. The children’s eco garden – behind the school beside St Michael’s church – is sheltered by giant trees including oaks that long predate the school – “it could be one of the oldest oak trees in West Belfast,” said Aidan.

He added: “We need to be teaching young ones, today, at home, in school and crucially in the nursery – the formative years – how to appreciate and look after wildlife, the pollinators, birds, bats, hedgehogs, vegetables, amphibians, orchards and ultimately ourselves so to be best placed in years to come to deal with all the many complex survival challenges ahead for people and biodiversity.”

Things were so different when Aidan was young. The binoculars which helped instil a love of nature unfortunately didn’t last long. British soldiers based in nearby Casement noticed them being used at an upstairs window and thought they were being spied on. They raided his house, running up the stairs to find Aidan birdwatching from his bedroom.

The soldiers confiscated the binoculars. “The gave me a wee ticket, and said I could collect them when the Troubles were over,” Aidan said this week. “I never imagined that would be 30 years later!” Aidan never got his hands on those binoculars again, but he attributes that short time spent with that special gift from his father to his lifelong love of nature. Five years later, his father was killed by a British army Saracen in a crash on the Falls Road.

“Those binoculars launched me on the journey that I’m still enjoying. And I hope this eco garden will have the same effect by inspiring the next generation of youngsters,” he said.