The man with the plan in an emergency 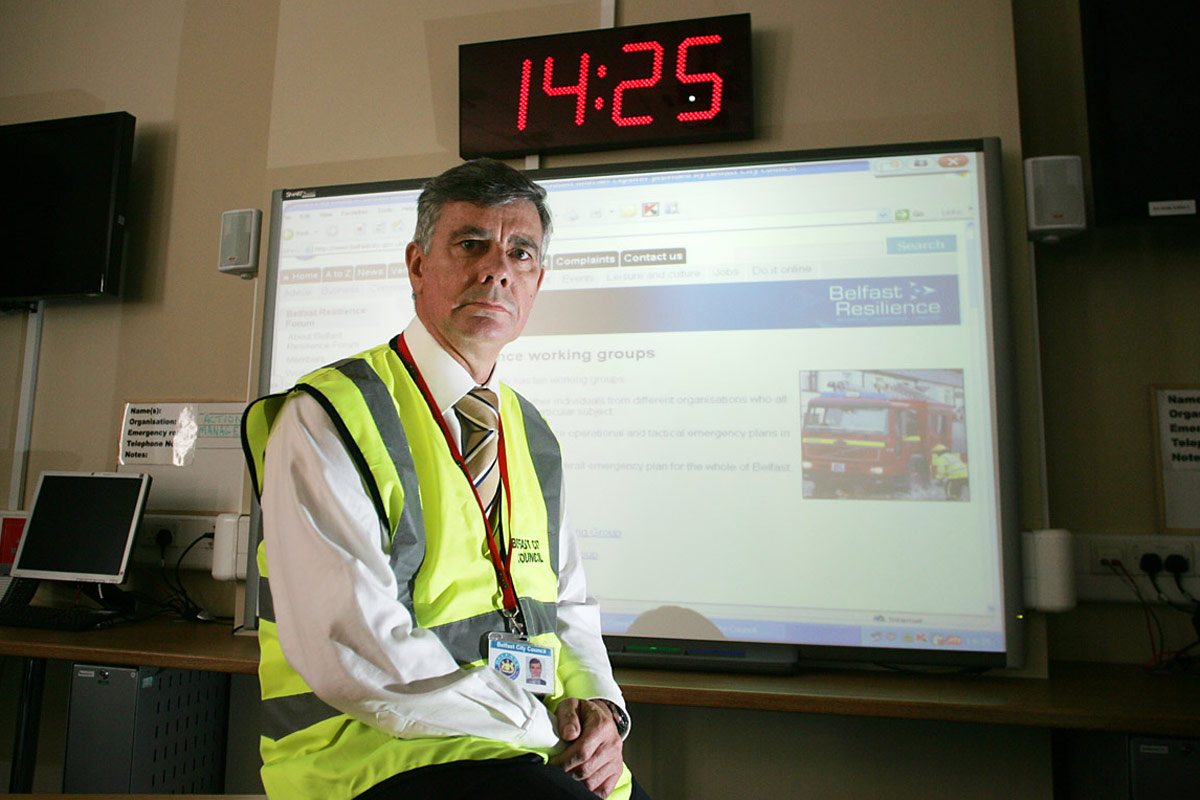 Belfast has seen several emergencies in recent months, from the water crisis in the winter to a double decker bus crash in the summer.

Although affected in the immediate aftermath the public rarely considers the meticulous planning required to deal with such situations.

For example, a few years ago a train crash was staged at the Apollo Road off the Boucher Road. Four disused train carriages were borrowed from Translink and an accident scene created.

People made up as casualties, and sand dummies which acted as bodies, were then ‘rescued’ from the wreckage. Meanwhile the Olympia Leisure Centre was set up as a survivor centre for the crash’s ‘wounded’.

The man behind organising such events is Davy Neill from Belfast City Council. Responsible for the emergency planning arrangements within the council, as well as being first point of contact for any crises in the city, he explains the rationale behind such events.

“The train crash exercise is a   credible scenario because over 300 people use the Enterprise train to Dublin each day.

“If anything happened with that, it would be a big situation.”

Anticipating such emergencies is worked out in a variety of ways including practical run-throughs for scenarios that can occur.

“The exercises can vary from what we call a desktop exercise where we sit around tables and create a series of events, giving people a short period of time to respond to the different challenges and how they would respond.

“We also have live exercises such as the staged train crash.”

Two recent local examples of the council in action over emergency situations in Belfast were the response to the attacks on Roma in South Belfast in summer 2009 and the gas leak on the Ormeau Road later that year.

“The Roma situation in particular was very tricky to handle because of the communications barrier. Their language made it difficult, as did their type of EU citizenship.

“All the agencies did well to pull together to look after them and eventually get them repatriated. Meanwhile the gas leak involved a major operation that saw three or four streets in the Lower Ormeau evacuated.

“I was on-site that night to reassure the public everything was under control.

“It’s important in those sorts of situations to get the message out that we are responding okay and keep people informed what’s happening and when they can return to their homes.”

In his daily role at the emergency co-ordination centre in City Hall, Davy looks at a range of events that could possibly happen across Belfast and what would be done if they did.

“The emergencies themselves can be pretty diverse – anything from the major flooding we experienced in 2007 and 2008 to severe winter weather and the recent double decker bus crash in Belfast.

“One of the things we would offer would be humanitarian assistance – say there’s a situation where there are a number of casualties, we would open up one of our centres for the wounded so people can be processed there as part of the multi-agency response.

“We also have a back-up centre in Duncrue which we make sure is maintained in case of emergencies. That ensures people can respond if actual emergencies happen.”

Although Davy is the point man in emergency situations, a group known as the Belfast Resilience Forum, which includes representatives of more than 50 organisations, also help co-ordinate approaches to major emergencies.

“We look at a lot of hypotheticals and see what could be a problem in the future, so we are well equipped if they happen. We had severe gales a few weeks back and we were on high alert for structural damage and power outages because the Met Office told us it was going to happen.

“Other sorts of things would be human health pandemics and animal health problems like foot and mouth disease.

“We were also involved recently in the response to the Cork air crash because the plane left from the City Airport and had passengers from Belfast. Therefore we had a control room set up at the airport to deal with the unfolding situation.”

One developing side of the job Davy has to deal with is communications with the public when emergencies strike.

“We have a group made up of press officers from various organisations who would liaise with the media and give what information we need to the public in emergency situations.

“We are also focusing on how communities can prepare themselves for these situations, particularly after last winter’s water shortage. The council had to get involved with Northern Ireland Water to set up water distribution points and at one stage we had 17 of them.

“People also needed to know we were keeping our leisure and community centres warm because we were worried something like this may have happened and we would need to evacuate people into them.”

Davy says he is “very reassured” by the amount of work that goes into preparing for different circumstances.

“I would certainly be more reassured now than I was five years ago when I started this job. We have put an awful lot of effort in with all the different agencies to try and develop protocols and plans.

“For example, recently we took the emergency services down to the harbour estate to familiarise them with the layout and the risks involved down there should anything happen.

“So we are very proactive in emergency planning and the work we do with the resistance forum is a great vehicle to communicate and co-ordinate with everyone involved.”