The taste of Ulster’s past 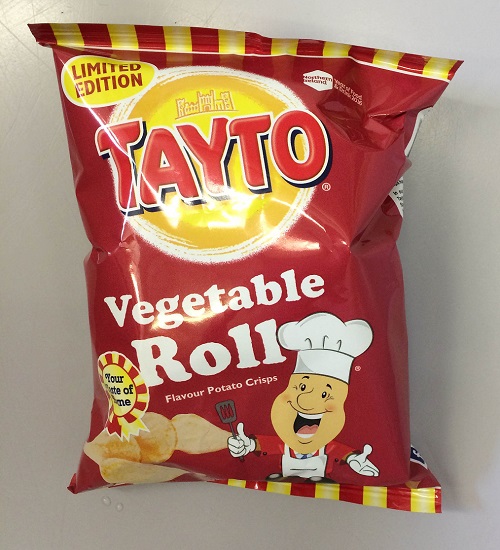 FLAVOUR OF THE MONTH: Tayto’s new veggie roll crisps proved to be something of a let-down

HERE’S a packet of Tayto vegetable roll flavour potato crisps. Note the presence of the word ‘flavour’ in there. They’re required to put that in there because there’s no actual vegetable roll in the crisps – just potatoes; they don’t smear the raw potatoes with minced pork and flecks of green stuff and deep-fry it, the vegetable roll taste is produced by whatever weird alchemy the Tandragee boffins employ to make us think we’re eating vegetable roll. Freeze-dried powders, perhaps, yeast powder, maybe, and doubtless our old friend monosodium glutamate.

Squinter used to eat vegetable roll when he was younger, as did most people of a certain age. Somewhere around the early 1990s it vanished from his life, although you can still get it in most butchers. But it’s consumed in nowhere near the same quantity as it was back in the day. Squinter can say with his hand on his heart that it has never passed his children’s lips, and they’re all well up now, as the saying goes.

It was a distinctly forgettable taste, Squinter seems to remember, so why Tayto want to bring it back now is anyone’s guess. Sentimentality, we can suppose, a yearning for the comforting certainties of a past that was never really that comfortable or that certain. You can most likely throw in a wee bit of Norn Iron pride there, for against a background of nervousness about the true history of Our Wee Country, there’s a big market for non-controversial, apolitical nostalgia like kitsch Ulster food: Veda, sugar pieces, brown fish in butter sauce, cola-cubes, sherbet dips – none of which are unique to This Here Pravince and few of which are unique to Ireland.

You may or may not be surprised to learn that on tasting the product Squinter found that Tayto’s vegetable roll flavour crisps taste like vegetable roll in the same way that oranges taste like coconut. They’re more like smoky bacon meets roast chicken with an undertone of brandy balls. Strange, in other words.

The good news is that the bag is stamped ‘Limited Edition’, which would suggest that if they don’t take off then they will be quietly but firmly consigned to the internet page marked ‘All Our Yesterdays’. So while today we ask the question, do you remember veggie roll?, in 20 or 30 years’ time our middle-aged children will ask, do you remember veggie roll crisps? And the answer will come, yes, I do remember them.
Unfortunately.