Three is the magic number for super Star 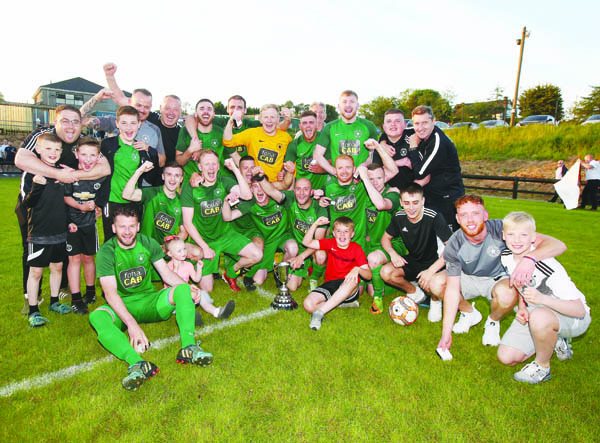 Crumlin Star celebrate after claiming the Clarence Cup on Tuesday night, which saw them complete the NAFL treble

CRUMLIN Star made history at Breda Park on Tuesday evening as the Ardoyne club completed an Amateur League treble, adding the Clarence Cup to the NAFL Premier Division title and Border Cup.

First half goals from Ciaran Murphy and Joseph McNeill set Star on their way and all doubt about the outcome was removed 10 minutes from the end when James Doyle nodded home a third.

Things did get a little tetchy in the dying moments when five red cards were issued, the first for Sirocco’s Carl McConville who received a second yellow when taking down Doyle who was advancing on goal before a brief flare up that saw the East Belfast side’s Jordan Stewart and Darren Spiers red carded along with Star’s Kevin McLaughlin and Paul Berne.

However, this could not dampen the mood of the North Belfast side who celebrated as the summer sun set on a glorious season.

“The 55th game this season I think it is,” said a delighted Star manager, Paul Trainor after.

“These kids are unreal. Everything I’ve asked of them all season, they’ve given me everything and more.

“We didn’t play particularly well tonight if I’m honest, but Sirocco are a very good team in the making.

“They’re very good up front and they caused us a few problems, but we scored at the right time. What more can I say about these boys?”

After the initial exchanges, it was Star who settled into this game much better and Barry McKervey twice went close with free-kicks in the opening 10 minutes, the second forcing a great save from Sirocco goalkeeper, Neil Shields.

The Ardoyne men were well on top and on 14 minutes, Ciaran Murphy got his head to a McKervey free kick at the back post, but the ball went just the other side of the post.

Sirocco were making little headway in attack, but on 19 minutes came their first effort on goal when Kurtis Hanna had a snapshot that bobbled wide.

Star were straight back on the attack and Noel Halfpenny slipped in Doyle on the right, but his shot was cleared off the line by Jamie Fleming.

Star continued to control the game and the goal they had been threatening duly arrived on the half hour mark when Joseph McNeill clipped in a fantastic ball from the right and Ciaran Murphy nipped in to lift it over Shields and give his side the lead.
Six minutes later, Kevin Trainor made a fine break from midfield, but didn’t quite get hold of his shot although Star did not have to wait much longer for a second as two minutes later, Doyle did well to keep the ball in on the right, shifted to his left and clipped an inviting pass for McNeill to poke home.

The Ardoyne men were well on their way, but Sirocco could and really should have got one back on 40 minutes when Lewis Irwin played Darren Spiers through. The winger’s shot was parried by Ciaran McNeill with Michael Bowers following in, but McNeill got back to save the header with Bowers given a second chance, but missed his kick as the ball was scrambled clear.

Star could have had another just before the break, but Doyle’s shot was deflected out for a corner as the North Belfast side went in at the break holding a 2-0 lead.

The third goal almost arrived two minutes after the break when Trainor’s overhit cross just cleared the bar with Shields scrambling back, while Sirocco had appeals for a 52nd minute penalty rightly waved away by referee, Dessie Magill after Bowers seemed to make the most of a good, covering Paul Prigent challenge.

The chances dried up a little in the second period, but Star were unlucky on 65 minutes when a great ball down the left saw Ciaran Murphy get there ahead of Shields who had come out of his box and cross for Doyle whose header was cleared off the line by Jamie Fleming.

Sirocco looked for a way back in, but they didn’t ever look likely to find the goal they needed and any hopes they may still have had were wiped out on 80 minutes as Aidan McNeill skipped past Richard Hamilton and crossed for Doyle who got the goal he deserved with a glancing header into the corner.

Darren Spiers went close to grabbing a consolation with a curling effort late on before things got a little untidy in the dying moments and those five red cards, but they couldn’t overshadow what was a great end to a great season for Crumlin Star as they completed the treble including back-to-back league titles.

“We had 25 clean sheets this season,” offered their manager as a factor in a quite remarkable season.
“Defensively, we have been very strong. They are just a really great bunch of lads.

“I think that’s the first time this treble has ever been done so I just can’t put it into words what they’ve done.”

Having just completed a marathon season, Trainor says his side can now enjoy a well-earned rest and allow themselves some time to celebrate their achievements although he knows a new campaign is never too far away.

“It’s May 29 and people are phoning me up looking for pre-season friendlies already,” he revealed.

“But look, it’s all about those kids. They’re fantastic and they deserve this.