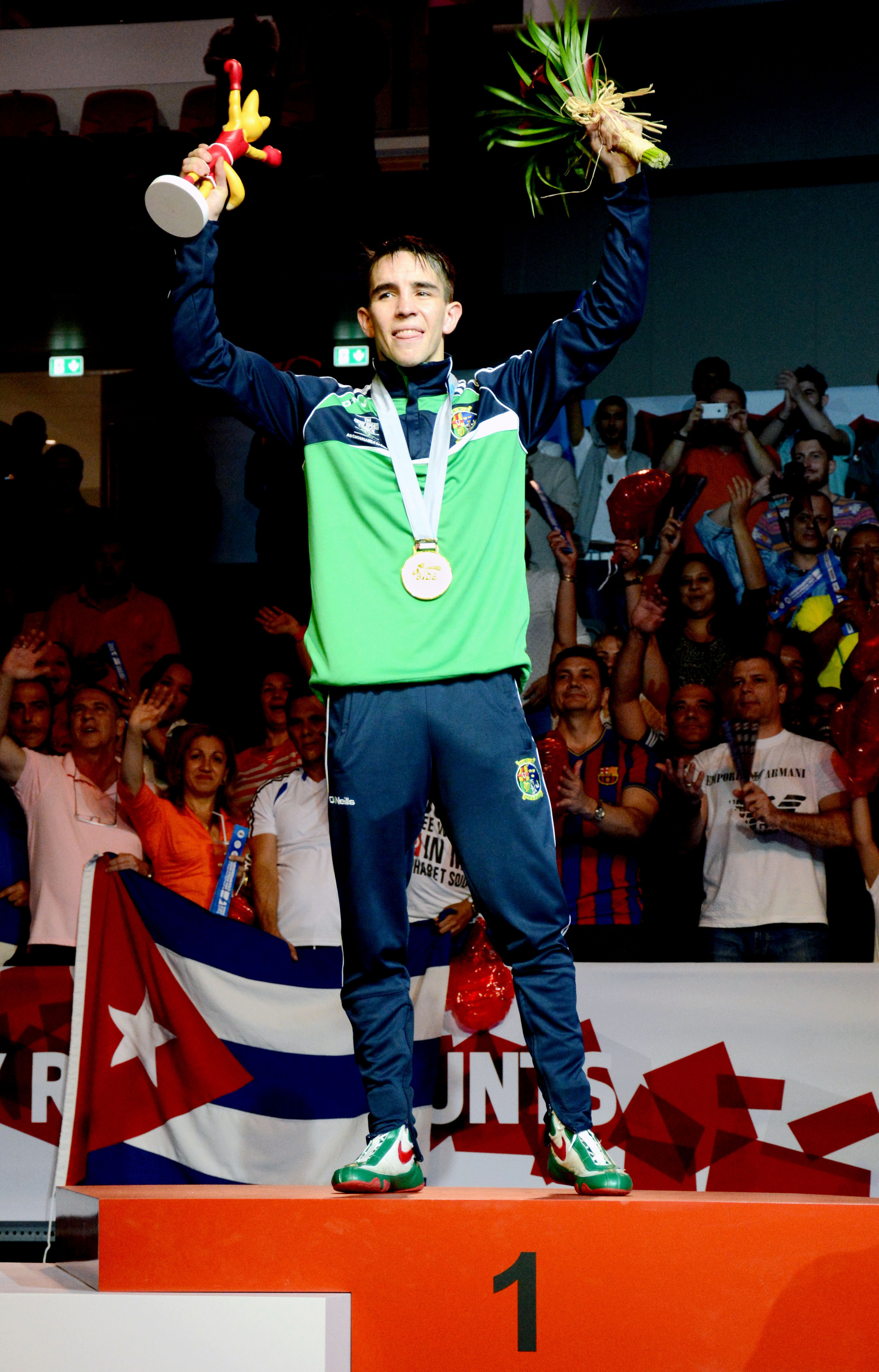 MICHAEL Conlan has become the first Irishman to win a gold medal at the World Elite Boxing Championships following his victory over Uzbekistan’s Murodjon Akhmadaliev in the bantamweight final in Doha, Qatar, last night.

A homecoming event is planned for the Falls man on Saturday when he will be joined by teammates and fellow Belfast boxers Sean McComb and Brendan Irvine at Belfast City Hall. They’ll depart on an open-top bus at 1pm, stopping at Davitts, the Beehive, the Rock Bar, the Trinity Lodge and McEnaney’s, finishing at the Whitefort at 3pm. Everyone – especially young boxers – is invited along to the gold medal celebrations.

Last night, the Clonard bantamweight survived a third round knockdown to take the title on a unanimous decision (30-27, 29-28, 29-28) after an all-action bout in which the 23-year-old was forced into the trenches against an opponent who came out swinging from the opening bell.

“Speechless. It was a phenomenal atmosphere in there,” said the beaming West Belfast man with that gold medal proudly hanging from his neck.

“It picked me off the canvas and kept me going.

It was probably the best punch I have ever been hit in my life. I’ve never been down before from a head shot or a body shot, but the fact it was a world final and he caught me sweet on the chin, it was testament to my fitness and I recovered really quick so I’m really happy.”

Right from the start it was clear Conlan would have to trade instead of employing his slick, counter-punching style as Akhmadaliev came flying out of the traps, swinging hooks and uppercuts as Conlan targeted the body in an attempt to slow the powerful Uzbek. He scored with a brace of eye-catching rights that helped him take the round on two of the three judges’ cards.

The pace slowed a little in the second with Conlan’s movement and and workrate gradually coming to the fore as he began to drive his rival back. And although he took a couple of rights towards the end of the round, he was given the nod by all three judges, leaving him on the brink of history.

Knowing he had to go for broke, Akhmadaliev emptied the tank in the third, looking for that home run hit that might rescue his dreams of gold. And with 40 seconds left it looked like he had found it – catching Conlan with an explosive right that dropped the West Belfast man to the canvas.

But the Irishman was quickly on his feet – perhaps a touch too quickly – and for the final half-minute he concentrated on denying Akhmadaliev the space to throw another bombshell.

“He was very strong coming forward and I knew he would try to walk me down on the back foot so I would have to try and beat him at his own game,” admitted the World, European and Commonwealth champion.

“I had 10 different game plans, but I knew the one I would pick would help me come out successful.”

The successful tactics were all down to Irish coaches Billy Walsh and Zaur Antia, but Conlan also paid tribute to his father, John, who has been coaching him from the beginning . He said this success belongs to his dad too.

“It’s been great here with the coaches, but I can’t leave my dad out,” he continued. “I have been boxing from I was seven and he has been with me from the start, so it’s fantastic to come here and do this. I just wish he was here with me.

“Billy and Zaur have had brilliant tactics all week. Every single game plan they have put together has worked.”

To complete the set of major medals (World, Olympic and European) was something special for Conlan, but to push on and become the first Irish male to be crowned world champion is extra special, even though the confident young bantamweight knew he could do it.

“I’m not surprised. I said I was going to do this,” he insisted. “To come here and make history for Ireland and be a world champion is something special.

“I just want to get home now and see my baby (Luisne) and my fiancée (Shauna) whose birthday it is next week. So this is for my baby and for her.”

The victory was just reward for Irish coaches Walsh and Antia, who have been plotting to break Ireland’s duck at the World Championships for over 10 years.

“It has been a dream of everybody in Irish boxing to have a World Elite champion,” said delighted Wexford man Walsh.

“Since the games began in 1974 the IABA have been trying. This is the first time we’ve had a world (male) champion and I’m over the moon.”

Irish joy was tempered a little by a quite incredible decision that went against Portlaoise man Michael O’Reilly in his third-place box-off for a place at the Olympics.

The Irish middleweight dominated the action but somehow all three judges gave the first two rounds to his Egyptian opponent, Hossam Abdin.

While O’Reilly took the third on all cards, it wasn’t enough and his disgusted reaction told the story when the result was called out to confirm he must now attempt to qualify for Rio in 2016 via other tough routes.

Meanwhile, Joe Ward will look to win a second world title for Ireland when he meets Cuba’s Julio La Cruz for light-heavy gold in Doha this evening. The boxers are expected to step through the ropes at around 6.30pm Irish time.