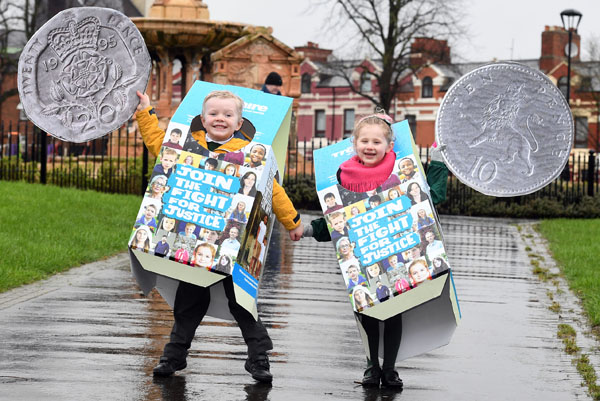 TROCAIRE has today begun its largest annual fundraising campaign as it targets humanitarian relief for up to one million people with the help of its Lenten campaign.

Schools, communities and parishes will come together over the next six weeks to pledge their support for the poorest people in the world.

The annual campaign – which this year marks its 44th year – has transformed the lives of millions of people around the world.

The family pictured on this year’s Trócaire box is from a village in Honduras that faces regular flooding from storms and rising sea levels. Trócaire’s project in the village keepspeople safe by providing for safe evacuation while campaigning for access to safer homes.

The organisation is responding to humanitarian crises around the world, including in South Sudan where the UN last week declared a famine. Trócaire is providing emergency food and water to people in South Sudan and donations to this year’s Lenten campaign will help the organisation expand its projects aimed at tackling hunger across the region.

“The scale of humanitarian need in the world is unprecedented,” he said. “Over 70 million people will require emergency food aid this year, while the number of people displaced from their homes is at its highest level since World War II. With the support of people in Ireland, Trócaire will deliver humanitarian aid to up to one million people in crisis this year.

“The situation in South Sudan is dire and set to worsen significantly over the coming months. Over 4.5 million people do not have enough food to eat and there is no prospect of that improving until August at the earliest. Over one million children are at immediate risk of death unless they receive urgent food aid.

“Hundreds of millions of people around the world have been lifted out of poverty by people’s generosity in Ireland, north and south, over the last 44 years.

“Aid has delivered so many success stories. Unfortunately, the spread of conflicts and the worsening impacts of climate change are increasingly out-pacing those efforts.

“Most of the countries where Trócaire works have developed enormously. There are fewer people living in extreme poverty, but for the poorest of the poor life has never been so challenging. Worsening droughts are making it impossible to grow food, while prolonged conflicts have left generations growing up in camps.

“Increasingly, our work is focused on delivering aid and support to people trapped in conflict or left hungry by drought. These are the two global challenges of our time.”