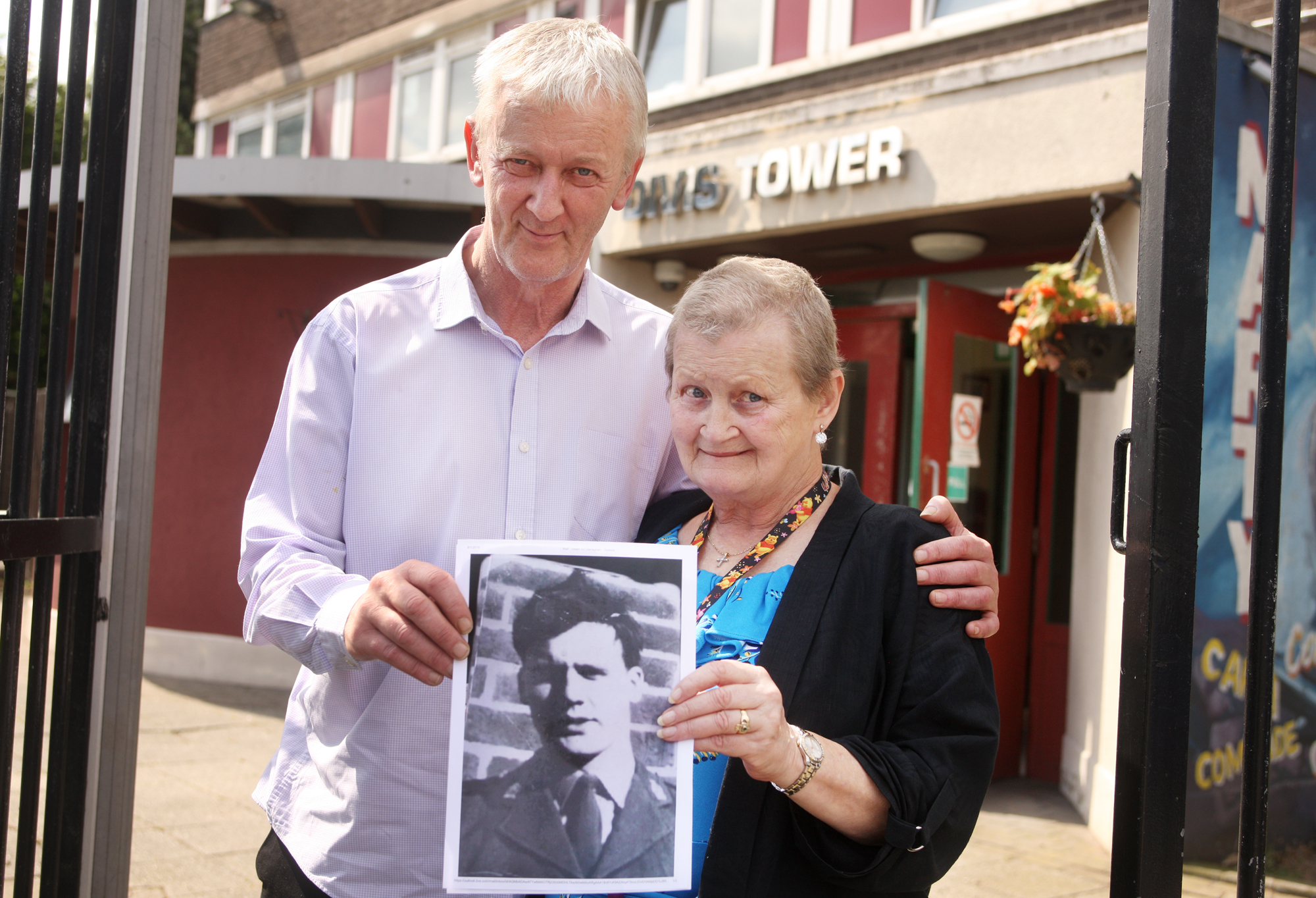 MEMORY: Malachi and Kathleen O’Gormley with a portrait of their cousin Hugh McCabe, shot dead in Divis Flats in August 1969

THE family of 20-year-old father-of-two Hugh McCabe, who was shot and killed as the pogroms of August 1969 erupted across Belfast, say they haven’t received justice 50 years on from his controversial death.
Hugh McCabe was a soldier in the Queen’s Royal Irish Hussars and was home on leave to spend time with his wife, their two-year-old daughter and newborn baby son. Mr McCabe was shot dead on August 15 1969 in disputed circumstances near his family home at Whitehall Row in the Divis Flats complex. At the time the police said that Mr McCabe was armed when he was shot, however this was disputed by witnesses in the area, including his father, a former RAF sergeant during WW2 who said his son was pulling an injured man off a balcony when he was hit. The shooting occurred around 1am on the morning. Hugh’s cousin Catherine O’Gormley described him as a “quiet-spoken man with impeccable manners who loved his wife Roseleen and their two children, Elizabeth and Tony.”
“At that time in Belfast there weren’t many jobs for a Catholic school leaver so he followed in his father’s footsteps and joined the army,” she said.
“My aunt Lizzy, Hugh’s mum, and my mum Annie were very close sisters. They attended the morgue to identify Hugh’s body that morning which was riddled from the base of his spine to the nape of his neck.
“I think my mum carried those images with her until her death.”
Catherine, who was 15 at the time of Hugh’s death, said her aunt Lizzy never received the clothes he was wearing at the time of his death – despite numerous requests for them. “From what I’ve heard and read through, the year the Troubles started was that day, when a group of Protestants, including the B Specials and a famous Reverend, hoisted the union flag and went intent on getting on to the Falls Road to burn out the ‘filthy Taigs’ and leave them nowhere to run.
“The locals rallied to protect their families and homes. They had no protection as the RUC had chosen the side of the aggressor. Trooper McCabe, my cousin, was not operating any kind of gun as was stated at the time. He was not on the roof of any building in the vicinity – he was only guilty of caring for others. If he was doing what the RUC accused him of how did he sustain the wounds he had? My aunt and his mum said ‘You could’ve put your fists through his wounds.’”
Catherine’s brother Malachi was six at the time of Hugh’s death. “I remember the tears, I remember the confusion, the news coverage,” he said. “Only being six, this was a major turning point in my life. A seed was planted that grew and grew, trying to grasp the injustice that had been done by Britain and the one-sideness of politics in Northern Ireland.”
Malachi spoke of how Hugh, his wife and children “were robbed of a life together 50 years ago”.
“Maybe there would’ve been more children born, we will never know. They are just ghosts and shadows that never materialised because of what happened on August 15 1969. It’s a disgrace what happened, not just for Hugh but for the Rooney family, for Gerard McAuley, it’s gut wrenching to see the families brought to tears and to see how hard it is to move on. I can see justice happening for those families – if enough pressure is applied. It’s time to relaunch, relight that need for answers, for truth.”
Poignantly in a letter sent to the McCabe family, Hugh’s aunt Sister Mary Stephen wrote of how her nephew had died “doing an act of charity and he would’ve done it no matter what religion the people were. That is something we must remember and be proud of.”
“Hugh died a hero helping others, he was just and upright and would wish us to forgive those who shared in his murder.”
Speaking on behalf of Relatives for Justice (RFJ) who have been supporting the McCabe family, casework manager Mike Ritchie said the primary concern of the family is to clear Hugh McCabe’s name.
“Ombudsman investigators commissioned a new forensic report,” he said. “This found that two different weapons (an SLR rifle and a .303) were fired. While ballistic examinations were unable conclusively to identify which RUC officer fired the fatal shot, the forensic expert felt it was more likely to be the officer who has since died.
“The trajectory of the bullets, allied to the injuries outlined in the post mortem report, suggested that the victim was on the roof of the stairwell of the (since demolished) Whitehall block of the Divis flats.”