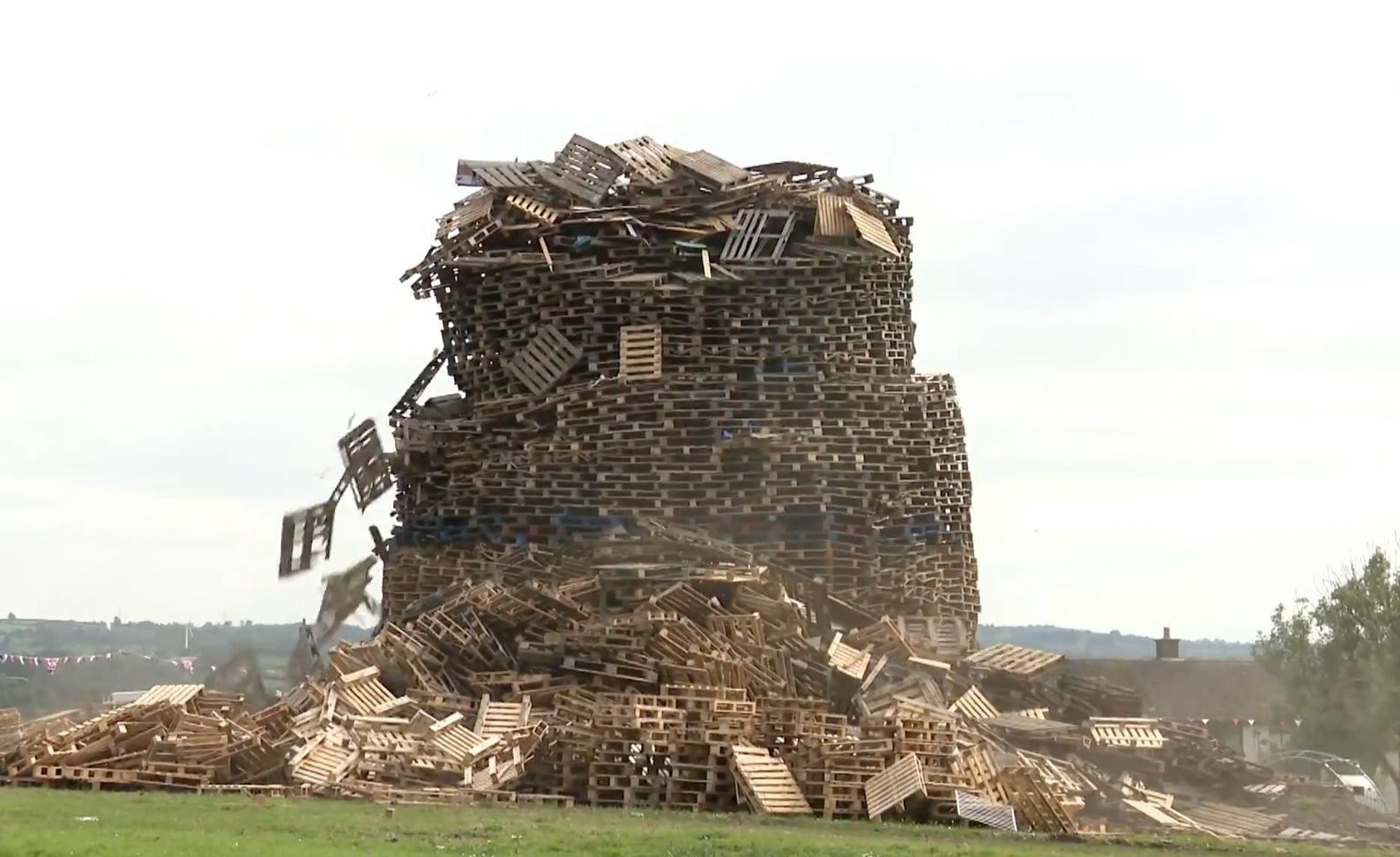 AFTERMATH: The Antiville bonfire in Larne was dismantled by the local council in the wake of the death

THERE’S no sense beating about the bush here. A young man has been killed at a bonfire in Larne and that’s a tragedy for his family and all who knew and loved him. But the depth of the sorrow and pain being felt in Larne and across the loyalist community should not stop us from pointing out the complete madness that is loyalist bonfire ‘culture’. On the contrary, if other tragedies are to be prevented, then we are duty-bound to focus on the utter irresponsibility of those who condone and enable this yearly display of health and safety insanity.

This isn’t anything new as far as this particular column is concerned. For a quarter of a century and more Squinter has been highlighting this annual slap in the face to every basic concept of public safety, but elsewhere there’s a kind of media omerta in place about the deadly nature of what loyalists have this year begun to refer to as ‘cultural bonfire sites’.

The same papers which regularly publish articles about companies being fined for breaching health and safety regulations publish appreciative articles about the incredible engineering skill that goes into building the biggest boneys. One unionist councillor last wee claimed that bonfire builders wear harnesses these days, which would be a welcome development, except he was quoted beside a picture of a man clinging by his fingertips to the side of the monstrous Craigyhill bonfire. Last week it was a popular and grimly funny subject on social media; this week it can be seen as the sick insult that it was.

Almost as sick as the decision by Mid and East Antrim Borough Council to dismantle the bonfire the day after the tragedy occurred. What reason was there for this decision? Was it to prevent further deaths? Hardly, because the Council – like every other Council in the north – is fully aware of this annual game of Russian roulette but chooses to do nothing about it. Until a man lies bloody and broken beneath the pallets. Is it as a mark of respect to the man’s family and community? If so, perhaps a better mark of respect would have been to do their job and ensure that people are kept safe instead of turning the yearly blind eye.

This is not culture, it’s hate, and also very dangerous. pic.twitter.com/cfslFwNDeB

Meanwhile, here's a line from the Belfast Telegraph website on Sunday before the Twelfth: “Meanwhile, other bonfires across Northern Ireland paid tribute to the man…”

So here we are in 2022, and not only are lethal bonfires an accepted part of everyday life in Our Wee Country, they are brought to human life Disney-like by the media and invested with the authority of a press office. There’s a reason, needless to say, why none of the engineering geniuses behind the bonfires step out of the shadows.

It’s possible that the family of the dead man could have a case against Mid and East Antrim Borough Council for their failure to enforce universally accepted and absolutely basic standards of public safety; it may also be possible that a government agency or the owner of the land may be culpable to a greater or lesser degree, although a recent judicial acknowledgement in the 2021 Tigers Bay bonfire case that police intervention was not advisable could be a get-out-of-jail card for the parties involved. But it would be a foolish man indeed who would take responsibility for a structure that was a death waiting to happen.

Away from @Stendhalireland and on the other side of Limavady - pallets on this bonfire have been painted green, white and orange.
Local politicians have condemned the structure on Greystone Rd. @CArchibald_SF said it's "an expression of hate". pic.twitter.com/uAHecLEkgF

That could happen next year, it could happen the year after that, it could happen in five years time – but it will happen because this will be forgotten about, just as the incident last year when a young man was pictured running away on fire from a just-lit bonfire with his body on fire­ has been forgotten.

IT’S a terrible cliché – the idea that gardening is overwhelmingly a pastime of men and women of a certain age. In the daytime TV ads for life cover and funeral plans, silver-haired grannies and grandas are usually pictured pottering about the garden with a pair of secateurs, pausing to remove a glove to tell us what a tremendous gift it would be to our loved ones if we left them a few quid or spared them the expense of putting us in the ground.

Squinter’s of a certain age now – late middle-age, according to the generally accepted definition of middle- and old-age – and while he does his bit in the garden with the lawnmower and has a few potted plants from a garden centre at the front door, he’s never felt the urge to sink his fingers into a bag of compost or subscribe to  gardening magazines.

(Which by all accounts don’t have free seeds attached to the cover when they’re sent to This Here Pravince thanks to the Brussels Protocol Nazis.) Is all that about to change? We’ll see…
Squinter’s leaving a big DIY store recently when on the way out he passes those long shelves of potted plants that are to be seen at the entrance and exit at this time of year. His eye is drawn to a little sign that invites customers to take a chance on plants that aren’t exactly in the best of blooming health. A bit wilted, no flowers, half the leaves brown at the edges – that kind of thing. But the really intriguing part is that they are a quid each when their thriving, pretty neighbours are being scooped up for £12.99 a pop. Garvinea, if you’re still interested, a popular member of the daisy family which blooms in a variety of colours from May to October.

Squinter selects three that seem the least poorly of the bunch and heads back to the till. Beep, beep, beep goes the scanner and the princely sum of £3 appears on the card machine; the thought that just a few days earlier they’d have cost him £39 is a deeply satisfying one.

Back home and Squinter heads straight to the garden shed, where at the back of a table is a stack of empty plastic pots and in the corner a half-full bag of compost. He picks three of the bigger pots and carries the compost to the front step where the garvineas are looking a little bit sorry for themselves, if the truth be told. He’s intent on repotting the plants in a bigger holder because that’s precisely what Professor Google has suggested. He gently lifts out the first of the plants and the root system and soil come out in one piece. He softly massages the soil and roots to aerate them a little and then places the plant in the bigger pot, in which two inches of compost have been deposited. Then he lifts handfuls of compost which he presses down round the sides of the roots until the garvinea is sitting comfortably upright.

Squinter repeats the process with the other two and it occurs to him fairly early on that this is a hugely enjoyable activity; or perhaps deeply satisfying is a better description, because Squinter can’t remember the last time he was so completely engrossed in a recreational act. He has a vague sense that there’s something primeval about it, something that he’s not fully able to understand himself, never mind express it.

Then it’s time to remove the brown leaves and the withered heads of blooms that had once winked gaily at garden centre customers, but which are now bowed and beaten. Water frequently after potting, Prof Google had advised, so out comes the hose and with the nozzle turned to ‘mist’ Squinter proceeds to turn an aerosol of mercy on plants and soil.

It's probably overstating it a bit to say that in the days to come Squinter becomes obsessed with his plants, but since they were at the front door, every time he leaves the house he finds himself bending to closely inspect them for the smallest signs of new life; and watering his new wards becomes one of the highlights of his day. One plant dies in three days – it’s clearly and simply beyond redemption and into the brown bin it goes. But the other two respond quickly – the remaining leaves widen and brighten in colour and the stems start climbing up past the writing on the plastic plant descriptor; but as the days turn into a week and the flowers refuse to bud the initial surge of hope begins to wane, and when a week turns into a fortnight, Squinter has all but resigned himself to being the almost proud possessor of two healthy but flowerless garvineas.

And then it happens. An overcast morning and Squinter is surveying the plants as per on his way out the door when he spots a small green bead at the very base of one plant; on closer examination it turns out to be the tiniest, most perfectly-formed bud, and an inch away from it there’s another. Squinter excitedly moves to the second plant to find that there are not only two, but three, little buds to be found there. Just under a week later and the state of play can be seen in the picture. Not exactly a profusion of blossoms, but a modestly pretty and healthy scene; and since the plant blossoms until the autumn, who knows what we might be looking at this time next week, or next month, or next year?

Is this the start of it? Is Squinter going to be a walking ad for mature financial services in his front garden? Not really, because while he remains totally committed and engaged to his twin garvineas, he hasn’t been tempted to expand his plant rescue activity, or indeed proceed to more traditional gardening routines. But there’s no doubt that a seed has been planted.