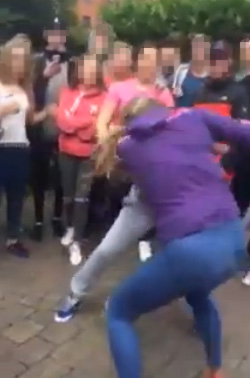 The girls, one from Lenadoon and one from the Shankill, attack each other in a circle formed by a crowd of youths

PSNI said disturbances were reported early on Sunday afternoon. As many as 200 young people gathered having been alerted to the time and location of the fight via Facebook.

There were extraordinary scenes as young people – both male and female – gathered to make a human circle where the fight took place. Passers-by looked on in amazement as events unfolded near the traffic intersection between Millfield and Divis Street. The fight was short-lived, with the two girls pulling each others hair and throwing a series of punches without inflicting any injuries. It came to a halt after around 30 seconds when the two tumbled into the watching crowd.

Videos of the incident have been shared widely online. It’s believed that one girl came from Lenadoon and the other came from the Shankill although there seems to be no indication that the fight was sectarian in nature.

A spokesman for the PSNI said two girls have been arrested.

“We cannot stress enough how dangerous and frankly stupid this business of prearranging fights is,” he said. “Teenagers are risking not only physical harm but also a criminal record. This needs to stop now.”