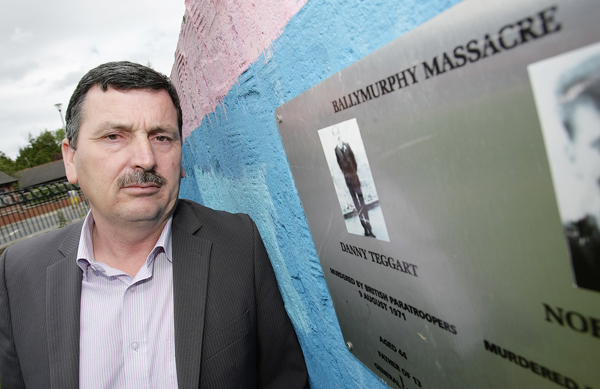 DISRESPECT: John Teggart at the spot where his father Daniel Teggart was shot dead by the British Army

A VICTIM’S campaigner has branded proposals to introduce a British forces amnesty plan as ‘disgusting’.

John Teggart was speaking as news emerged of plans by the British government to introduce a ‘statute of limitations’, meaning British soldiers and RUC personnel could not be prosecuted for offences they committed during the conflict in the north.

Mr Teggart’s father, Daniel (44), was one of 11 people killed on the streets of Ballymurphy by the British Army over three days in August 1971.

“This is absolutely disgusting, they are dancing on the graves of our loved ones and we are now seeing the dirty deeds and deals that are being carried out by the DUP and Conservatives who, let’s face it, would do anything to cling onto power,” said John Teggart.

“Furthermore, the Irish Government knew nothing about this, therefore they are not only disrespecting all the innocent victims who were murdered by crown forces but they are also completely disrespecting their partners in the Good Friday Agreement.”

Mr Teggart added: “We are totally and utterly opposed to this as we hope all right thinking people will be.
“We, along with many, many others have campaigned long and hard to clear our loved one’s names and to have this latest insult hurled at us only makes us more determined to carry on our fight for justice.”

“With this Bill the DUP are trying to create legal protection for British soldiers regardless of the war crimes they committed in Ireland.
“British forces were directly involved in state-sponsored killings and also in a campaign of systemic collusion and state-sanctioned executions through surrogate unionist death squads.

“The families of victims and survivors of the Ballymurphy massacre are some of many who’ve suffered horrendously at the hands of this British aggression.
“British soldiers acted with impunity and any attempt to provide immunity to British soldiers and others who either directly, or indirectly through collusion, killed citizens is entirely contrary to the rule of law.”

Mike Ritchie of Relatives For Justice, who campaign on behalf of victims of state violence, added: “We feel that this is another attempt by the British government to avoid accountability for the actions of their agents during the conflict.

“It’s also a real insult to the Rowntree family who got a result in their inquest for saying that Francis shouldn’t have been shot dead and that the British government who had a hand in that had ‘lethal weapons’. Then that very same week they want to bring in the statute of limitations – it’s not acceptable.”