Victims’ campaigner Gerry finds comfort and solace in his writing 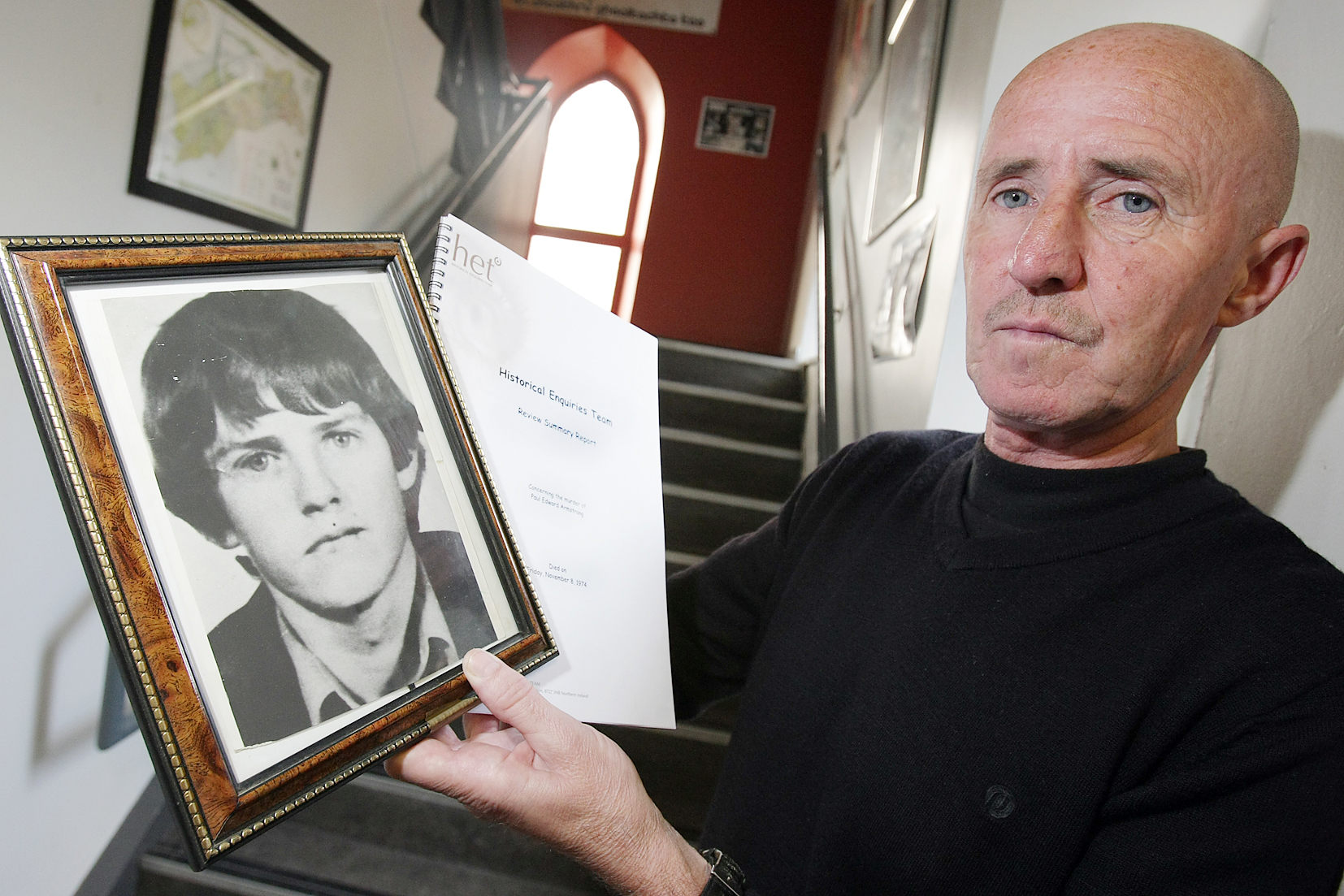 Gerry Armstrong with the Historical Enquiries Teams review summary report into the murder of his brother, Paul Armstrong. 3127mj11
THE shuddering jolt of a newspaper headline was the spark that Gerry Armstrong needed to pick up a pen and write his first poem.

Thirty years on and the well-known victims’ campaigner is putting the final touches to an exhibition of his poetry, but he has also set sail on his most ambitious venture yet –writing an autobiography about his teenage years growing up against the backdrop of the Troubles.

Gerry’s younger brother Paul Armstrong was abducted, tortured and murdered by the UVF on November 8 1974 when he was just 18-years-old.

Although Gerry has campaigned for the truth about his brother’s killing, he says he doesn’t believe he’ll ever get the justice that he craves, and has found solace and comfort in his writing.

“Paul’s 46 years dead this coming November,” says Gerry. “I’ve met Chief Constables, the HET and Police Ombudsman – you name it, I’ve done it. I’ve had different discussions, speaking about Paul, asking questions – as lots of families have been doing – and I’m not naïve enough to think that I’ll ever get the answers or I will ever get the truth.”

Gerry first put pen to paper in 1989 when he saw a headline in a local newspaper the day after the Guildford Four were released from prison after having spent 15 years in jail, wrongfully convicted of the IRA pub bombings in Guildford, Surrey, in which five people were killed and sixty-five injured.

“The UVF said they killed our Paul because of the Guildford pub bombings,” said Gerry.

“I began writing poetry because one day I saw this newspaper headline about the release of the Guildford Four and it said ‘Innocent of Guildford’ and it triggered something in my head. I thought to myself, ‘Christ, someone else was innocent of Guildford, Paul Armstrong was innocent.’ He was killed in so-called retaliation for Guildford and that’s what started me writing.”

As soon as the current restrictions are eased surrounding the Coronavirus pandemic, an exhibition of Gerry’s poetry will be held in the Whiterock Library. It will be his second poetry exhibition in as many years. But at the moment it’s his autobiography that is occupying much of his time.

“Over the past six months I had this idea: I’ll write a book – I’ll write Paul’s story and that’s what I was going to do,” explains Gerry.

“But then I thought, no I’ll tell my story of growing up in the Troubles of the sixties and seventies and get some of my poetry included – I’ve even got a title for the book ‘Poetry and Prose’.

“My son, our Ryan came into the kitchen one day and I was sitting writing and he said, what are you writing? And I said I’m trying to write a book here, I’m writing my life story and he started laughing. So he went out of the room and he comes back with a laptop and he sets me up with Microsoft Word and he told me to start typing. So I had written about ten thousands words by that time and so I started one finger at a time typing them in.

Gerry says the book begins when he is 10-years-old in St Vincent de Paul school in Ligoniel up until he is 19.

Looking back on his early poetry, Gerry says it was his way of coping with the trauma of losing his brother.

“At school I hated poetry. Seamus Heaney, William Blake – they were all too deep for me. I always remember my old English teach Mr Daly saying, ‘Armstrong, what did you get from that poem?’ and I would say, ‘nothing, Sir’. Now, I wasn’t the sharpest tack at school but I wasn’t stupid. I liked English.”

He adds: “I feel I have to get this out of my system. I’m 65. I’m sick, sore and tired of asking questions.

“My mother never went to her son’s funeral and my mother never set foot in Milltown Cemetery. We never spoke about Paul for 25 years.

“People talk about your mental health. I’m not a person who gets depressed. I’ve got things running through my head, I’m a half glass full person. I’ve Rheumatoid arthritis and Osteoarthritis, five years in remission from cancer. I’ve grown up in terrible times and I’ve seen an awful lot. My brother was shot dead, our house was bombed three or four times and I thought to myself, everyone else is writing a book, why don’t you write a book?

“My past is my present.”