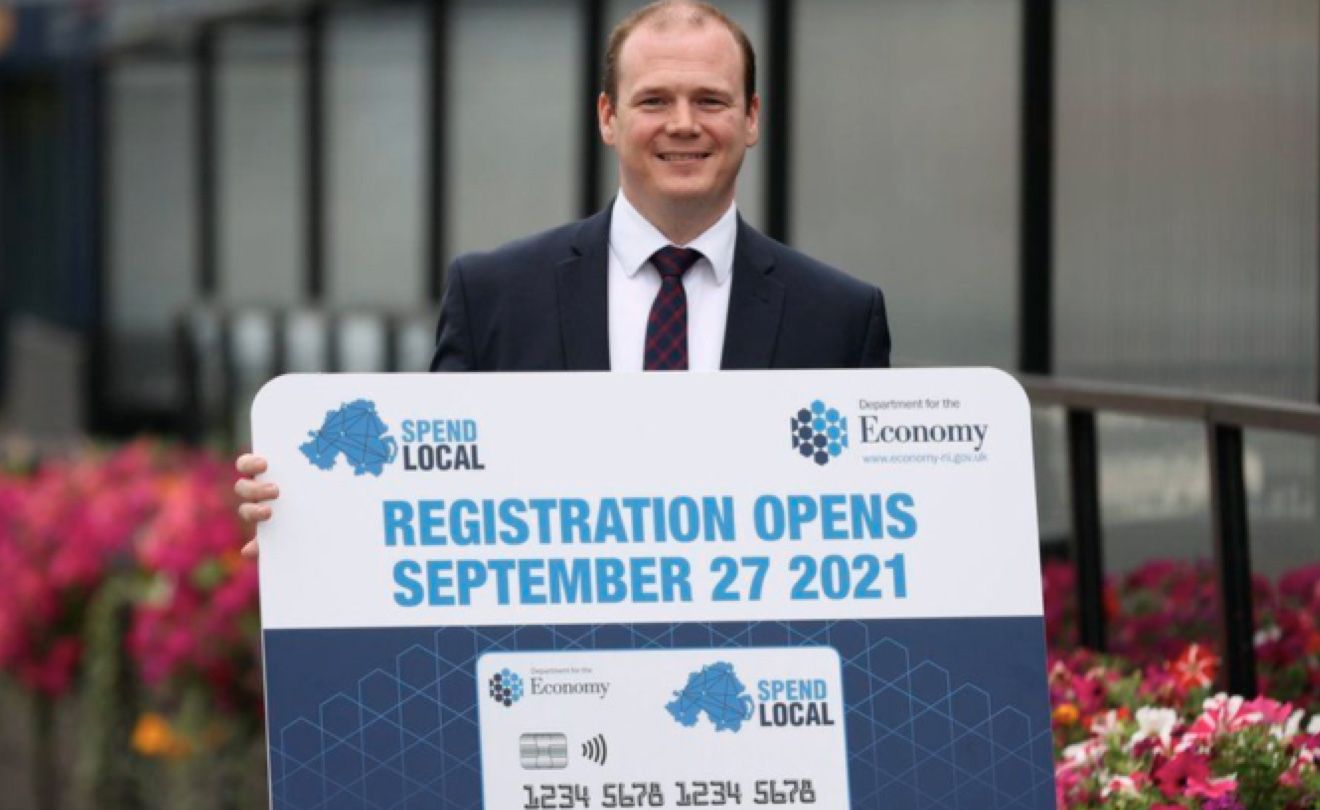 THE site dealing with applications for the £100 shopping voucher crashed on its opening morning, to the surprise of absolutely no-one.

It might be argued that those going straight online are rather like the people who immediately stand up when the plane lands, but the Malaga to Belfast analogy only stacks up if you accept it’s just childlike impatience that is driving the early flood of voucher applications.

A hundred quid to spend as the Halloween and Christmas seasons approach may not be a big deal to those leaning back in their chairs, lacing their fingers behind their heads and promising to wait until next week or next month. But if you’re sitting with a young family, no food in the fridge and no money for your electricity card, of course you’re going to try to get your hands on the money as soon as possible. And the last thing you want to hear is a lecture from somebody with a bit of a roughness telling you to chill out and wait a while.

Half a million people went online to apply for the money on Monday morning, that’s a big chunk of the North’s population of 1.8 million – an even bigger chunk of the estimated 1.3 million over-18s eligible for the voucher. And there’s no getting away from it – a hell of a lot of those people could easily afford to put it off for a week or a month, but are rushing in anyway for fear of losing out, as the cards cannot be used after the end of November and no further applications will be accepted after October 25. That still means you’ve five weeks to apply and as it’s a pretty safe bet that there are not going to be half a million applications next Monday, the early panic seems a wee bit much.

Human nature kicking in, you have to suppose. Bit like the Great Toilet Roll Riots of 2020 or the chaos we’re seeing on GB petrol stations forecourts, where drivers who manage to get to a pump are filling the tank as well as the eight jerry cans in the boot while a hundred drivers behind them look on and bite their knuckles. Meanwhile, Tory ministers claim there is no petrol shortage, even as petrol stations close, emergency services vehicles are off the road and the same Tory ministers are round the cabinet table discussing bringing in the army to drive the fuel tankers.

Technically it’s correct to say that there’s no shortage of fuel because Britain’s biggest fuel depots have plenty of petrol and diesel to service the stations. It’s just that there aren’t enough tanker drivers to get the fuel to the forecourts because EU HGV drivers did exactly what England told them to and pissed off back to Europe. But a government minister telling you there’s technically no shortage of fuel when you’ve just driven around for two hourse looking for an open petrol station is hardly likely to have you nodding your head in agreement as you listen to the car radio.

Boris Johnson has launched Operation Christmas – the first Operation Christmas since last year, when according to the Mail, the Express, the Times and the Telegraph, he single-handedly saved Christmas by temporarily scrubbing restrictions on family gatherings. And the only price paid was a New Year surge in Covid deaths and infections. Johnson is now trying to lure EU lorry drivers back with a temporary visa scheme that gives them a fast track to work in GB. But only up to Christmas Eve, when they will have to piss off back to Europe again so the Brits can enjoy the festive food and drink that they’ve delivered to them.

Arch-Tory John Redwood came up with a cracking idea to address the HGV problem on Twitter this week. He wrote: “Online companies have attracted lots of extra drivers to do parcel van deliveries. HGV employees need to learn from them how they did it.”

This is an excellent idea, except for the fact that your Amazon, Yodel or DHL driver is able to get behind the wheel of his Ford Transit or Mercedes Sprinter van with a bog-standard driving licence like the one in Squinter’s wallet. In other words, if Squinter was so minded he could get a job delivering parcels tomorrow.

A HGV licence – now that’s horsepower of a different colour. It costs thousands of pounds to take enough devilishly difficult driving lessons to see you pass the test. And once you get to the test it’s a five-part process that makes getting a car licence look like a stroll in the park. Throw in the fact that it’ll take months at a minimum to go from ordinary licence to full HGV and you begin to see that Mr Redwood might not be the most reliable person in the world to consult on modern transport logistics.

The good news in all of this is that there are no fuel shortages here because of the Protocol. No food shortages either. In fact, we’re in for a pretty normal Christmas as long as the DUP, UUP and TUV don’t get their way. If it’s up to them, we’ll be swapping vital organs for food and fuel by November and your Christmas dinner is going to be cooked on a 1974 UWC strike back-garden grill.

NEW(ISH) DUP leader Sir Jeffrey of Donaldson turned his attentions at the start of the week to the Labour Party conference in Brighton.

There’s a lot happening in GB at the minute, of course, and it’s only right that that the leader of a party in one of the devolved regions should take an active interest in the affairs of the United Kingdom. And what issue on the conference agenda excited the interest of Sir Jeff? Well, he’s got a fairly lengthy list to choose from, and at the top is the Labour response to the Tory Brexit disaster unfolding nightly on the news in front of our eyes.

Or is he worried about an altogether more esoteric Labour-related issue? Keir Starmer’s u-turn on party reform? In-fighting? Poor polling? A leadership challenge?

Well, no, actually. None of these things was of the slightest interest to the outgoing Lagan Valley MP and wannabeMLA. Or, at least, none was of sufficient interest to move him to bang out a statement.

No, what has Sir Jeff up on his high white horse is the fact that literature for a fringe – ie unofficial – Labour conference event referred to this little piece of heaven as ‘the North of Ireland’. And what’s more, it’s a fringe organised by Sinn Féin, who aren’t renowned for their attachment to ‘Northern Ireland’.

Sir Jeff was particularly concerned that the event was to be addressed by Shadow Secretary of State Louise Haigh, who incidentally had no hand or part in the drawing up of the literature for an event to which she was merely an invitee. He said the reference to ‘the North of Ireland’ demonstrates a lack of maturity on the part of Sinn Féin and continued:  “Hopefully next time they will ensure that NI is given its proper title. I know Louise Haigh very well and I’ve worked closely with her – I know she always described Northern Ireland with its proper title and therefore I’m sure that she would not have endorsed yet another attempt by Sinn Féin to almost deny the existence of the place that they are elected to represent.”Another ermine-clad unionist joined the fray almost before Sir Jeff had ceased fulminating. Kate Hoey – or Baroness Hoey as she’s known down the Labour Working Men’s Club in her former seat of Vauxhall – was equally appalled at this latest republican outrage.

“I do hope that Louise Haigh makes it very clear that she is the shadow secretary of state for Northern Ireland and not for the north of Ireland. “I’m surprised that this did not get corrected, just in the same way that if any other country was described wrongly, I imagine someone would correct it,” she said. “I am sure Sir Keir will want to correct this as soon as possible.” (NB: It wasn’t corrected.)

Squinter’s not sure that this is a hill that either Kate or the DUP want to die on, considering that they reckon the names ‘Northern Ireland”, “Ulster” and “the Province” are perfectly interchangeable. While the ‘north of Ireland’ never fails to wind unionists up, it is not, strictly speaking, inaccurate, merely informal. Fermanagh, Antrim, Tyrone, Derry, Armagh and Down are all situated firmly in the north of the island, just as Newcastle and Middlesbrough are in the north of England, Wrexham and Llandudno are in the north of Wales and Aberdeen and Peterhead in the north of Scotland, It is, of course, the political slight contained in the ‘north of Ireland’ that gets on the unionist goat.

But while ‘Ulster’ and ‘the Province’ get on the nationalist goat every bit as much, their ubiquity in the language of unionism is quietly accepted – and certainly never, ever viewed as a story worth reporting. And the big difference is that both are inaccurate and plainly wrong. Ulster has nine counties – three of which were thrown to the Free State wolves, much to the now-forgotten fury of the Orange Order – and the same undenable reality applies to ‘the Province’.

And then we come to ‘the Mainland’, which Kate and the DUP believe to be a synonym for ‘Great Britain’.  But a larger island is only the mainland of a smaller island – and not even the TUV would argue that the occupied six north-eastern counties (there’s a catchy one for you) are an island. The mainland may work if you consider Ireland a single geographic or political unit – but it would be a warm day in hell before you’d get a unionist to admit to that. And that’s before we even approach the fact that nationalists and republicans would never consider Great Britain to be ‘the Mainland’, even in the event of a united Ireland.

The truth is that Sir Jeff doesn’t care what words Sinn Féin use to describe anything. He knows they say ‘the English queen’ and not ‘the queen’. He knows they say ‘the British Secretary of State’ and not ‘the Secretary of State’. And he knows full well they don’t and won’t say ‘Northern Ireland’, and against that background his intervention makes little sense. Where it begins to make sense is when we see a pattern developing of the DUP leader using meaningless but headline-grabbing culture and language differences to out-TUV Jim Allister and turn around the party’s disastrous recent polling.

• Spud gun or Biro casing? If you are Of A Certain Age, what was your weapon choice at school? Squinter had a cast-iron spud gun like this at one stage, but to tell the truth he has no idea what happened to it, and as it was ridiculously unreliable and jammed more times than it worked, he can’t say he missed it that much when it was gone. Now the Biro casing and yer ma’s soup mixture – simple, classic, timeless, failproof. Or if you’d run out of soup mixture, a chewed up wet wad of jotter paper would do the trick. The only question left after choice of weapon was... choice of target: teacher or pupil?