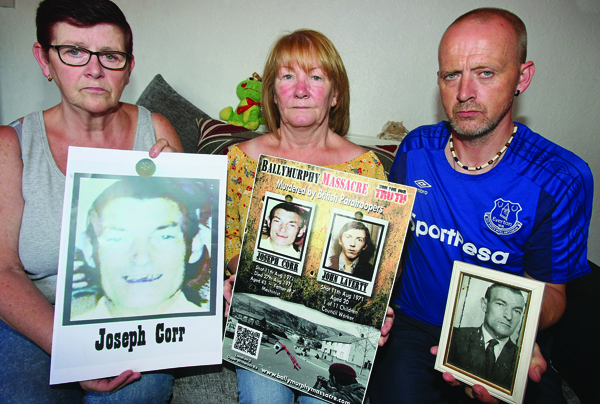 “HE WAS A VERY THOUGHTFUL DADDY”: Mary Corr, Eileen McKeown and Michael Corr remember Joseph Corr who was killed in the Ballymurphy Massacre

Joseph Corr was a hard-working father of seven children. On the third day after internment, Joseph had left his Divismore Crescent home with his 21-year-old son Joe when he heard bin lids being rattled.

Expecting to see loyalists gangs in the area, he was taken by surprise when he spotted Paratroopers making their way down the Mountain Loney. When he turned to return home, Joseph was shot near the junction of the Whiterock Road. He was taken to Musgrave Park Military Hospital and was later transferred to the RVH where he died on August 27, 1971 – he was 43.

The Andersonstown News met Joseph’s daughter Eileen McKeown to hear how the murder of her father impacted the young family.

She said: “I was nine at the time and I really struggle to remember all the details surrounding it, but I certainly remember the ripple effects, it ruined our lives and completely tore us apart and our Joe (Jnr) never ever recovered from it.

“Joe was sick from the day daddy died. He was actually with my daddy and didn’t know it. He stepped over somebody who was lying on the ground to try and help someone else who was hurt. He discovered later that it was his daddy he had stepped over which then made him even worse,” she said.

“He had this thing in his head that if he had let the other person go that he could’ve helped his father and he lived with that for 45 years, he had survivor’s guilt. It haunted him for the rest of his life
“There wasn’t any help given at the time, there was no counselling. You were just left to get on with it. It was heartbreaking to watch him.”

Discussing her parents Eileen said: “My daddy was a machinist in Shorts, and funnily enough all of his grandsons ended up following in his footsteps and working there. My mummy, Eileen, worked in the Royal.

“My parents were very hard workers, we were put to bed every evening at 6pm. Daddy worked nights, so he came in every morning and made us our porridge and put us out to school while mummy was away on to work.

“To this day if I speak to people who lived in Ballymurphy at the time they always say they only knew my mummy had kids because of the washing on the line. No-one ever saw us – we were always either in school or getting ready for bed.

“Our lives changed completely, we went from a family with two working parents to only having one parent left behind with seven kids who still had to work to make ends meet.”

Remembering special occasions from her younger days Eileen said: “He was a very thoughtful daddy, at Christmas and Easter he would hide presents and send you off looking for them, ours was a very happy home.

“We were actually in the process of moving to Australia. My daddy’s brother lived there and because my daddy had a trade he was able to go over to work, then he was murdered.

“It devastated the whole family, it completely changed our family. I missed a lot of school because I was needed at home to help out with cooking and cleaning.”

Eileen continued: “My mummy moved from a lovely three-bedroom house in Ballymurphy to a two-bedroom house in Oakman Street. I think she moved because daddy’s sister lived there and she would be able to help out with us.

“Mummy had to go back to work after daddy was murdered, she didn’t get any financial help whatsoever, she didn’t get a widow’s pension. She didn’t get free school uniforms or school dinners for us, I’ve no idea how she did it, it was so hard for her.

“In fact, the only thing our mummy got was a letter from some Shorts workers not long after my daddy had died which read ‘May your husband and his subhuman pals roast in hell.’

“Our mother had a hard life, I was only nine and there were two kids below me as well as all the older ones. I mean, our Seán was only four months old when my daddy was shot.”

Eileen added: “Even though our mummy was left on her own with us we didn’t get away with anything, she was still very quick to put us in our place, we were all raised with good manners.”

After Joseph died his family tried as best they could, but the years and the trauma took a shocking toll.

Eileen said: “The ones who did this, they don’t realise the after-effects. I mean, I used to have four brothers and now I’ve none.
“In 1999 Redmond was murdered in Edinburgh. As a child he was knocked down and left with what the doctors called a split personality, we were told that we would just have to learn to live with it. He went off the rails and turned to drink when he got older, he then ended up living on the streets in Scotland. He eventually got a flat, but shortly after that he was murdered. He was only 43, the same age my daddy was when he was murdered.

“Our younger brother, Seán, married and had two children, but he wasn’t able to cope with daddy’s death and turned to drink and drugs. He died ten days after his 34th birthday of brain cancer.
“Then Ciaran died of cancer. As I said earlier Joe (Jnr) was in poor health from the very day our father was shot, he also died of cancer.”

In 2015 Terry Laverty, whose brother John was murdered during the massacre, won a 44-year-long legal battle to clear his name. Terry was charged with riotous behaviour and sentenced to six months in prison, based on the evidence of a soldier.

Eileen said: “When Terry’s conviction was quashed we were delighted, because the Paras’ excuse for shooting my daddy and John Laverty that morning was that there was a riot. But when Terry’s case was overturned and the soldier said there was no riot then that proved our loved ones were innocent.

“The soldier actually said my daddy was the commandant of the riot, so if there was no riot how could he be a commandant?”

When asked what she thinks the future holds for the Ballymurphy Massacre families with the long-awaited inquest looming Eileen said: “I’m not holding out for any prosecutions, I don’t think that will happen.

“I want my daddy’s name cleared, I want the true facts in the history books.

“And I don’t want an apology like the one the Bloody Sunday families got, they should have got more than what David Cameron said, He could have been talking about anybody, he didn’t even say the victims names when he said Bloody Sunday was “unjustified and unjustifiable”. No, I want my daddy’s name read out, I want ‘Joseph Corr was an innocent man’ read out for everyone to hear.”

Eileen added: “I always said that as soon as our Joe died I would stop campaigning, but I didn’t.

“I’m carrying on now for Joe, I promised him I wouldn’t stop until we got justice.”