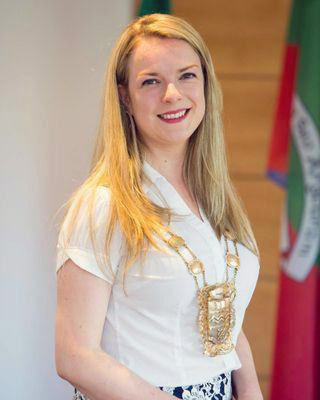 West Belfast woman Sarah Holland, who’s been elected Mayor of South Dublin, said it was the trauma of her father Harry’s murder that compelled her to become politically active.

The Sinn Féin Councillor was elected to the top role in South Dublin Council on Friday night. Originally from the Glen Road, she is the daughter of the much-loved greengrocer Harry Holland, who was murdered in September 2007 as he tried to stop a gang of youths from stealing his delivery van.

“When daddy was killed it pushed our family into the spotlight and I think you realise that so many people accept decisions that effect them from people in power without questioning them,” she said.

“I realised that I can use my voice to make change and that’s what pushed me to go into politics.”

The former St Dominic’s pupil said her family has been very supportive and her father would have been very proud of her achievement.

“It’s times like this when you miss him the most,” she said. “You know he’d be really proud. My family is really delighted and proud that the party put me forward for the role.”

In a second good news story for the West of the city, it’s emerged that the newly-elected Lord Mayor of Dublin City, Críona Ní Dhálaigh, lived for a number of years in West Belfast and worked in Bunscoil Phobal Feirste at the same time as Sarah Holland.

“After I left school I worked in the afterschools of Bunscoil Phobal Feirste and Críona was rúnaí in the school at the same time so it’s pretty amazing that we both have been elected at the same time in Dublin and both have strong West Belfast connections,” said Sarah

Lord Mayor Ní Dhálaigh will play a key role in the official 1916 Easter Rising Centenary next year, and Mayor Holland will play her part too – her constituency takes in the former home of the Pearse brothers.

“Críona will be doing a lot of official work in Dublin next year and it’s an amazing year to be elected,” she said.

“The Pearse brothers lived in Rathfarnham in my own constituency and there is a museum here so I am sure we will be commemorating it here too.”

Looking forward to her year, the new Mayor said she would be focusing on a number of issues, including housing and women.

“It is a big constituency that takes in some rural areas right through to urban areas so it is a big mix,” she said.

“One of the biggest issues is housing, at the minute we have 49 families waiting on emergency accommodation and by that I mean by that is they are waiting for room in a hostel.

“I am also focusing on women’s rights and also strongly support the sports clubs in the area.”

“Belfast was a formative part of me and my family's life and I remain immensely proud in particular of its vibrant and pioneering Irish language community,” she said. “I look forward to returning soon as First Citizen of Dublin to further cement links between our two great cities.”