Why won’t Arlene give truth to my dying dad? 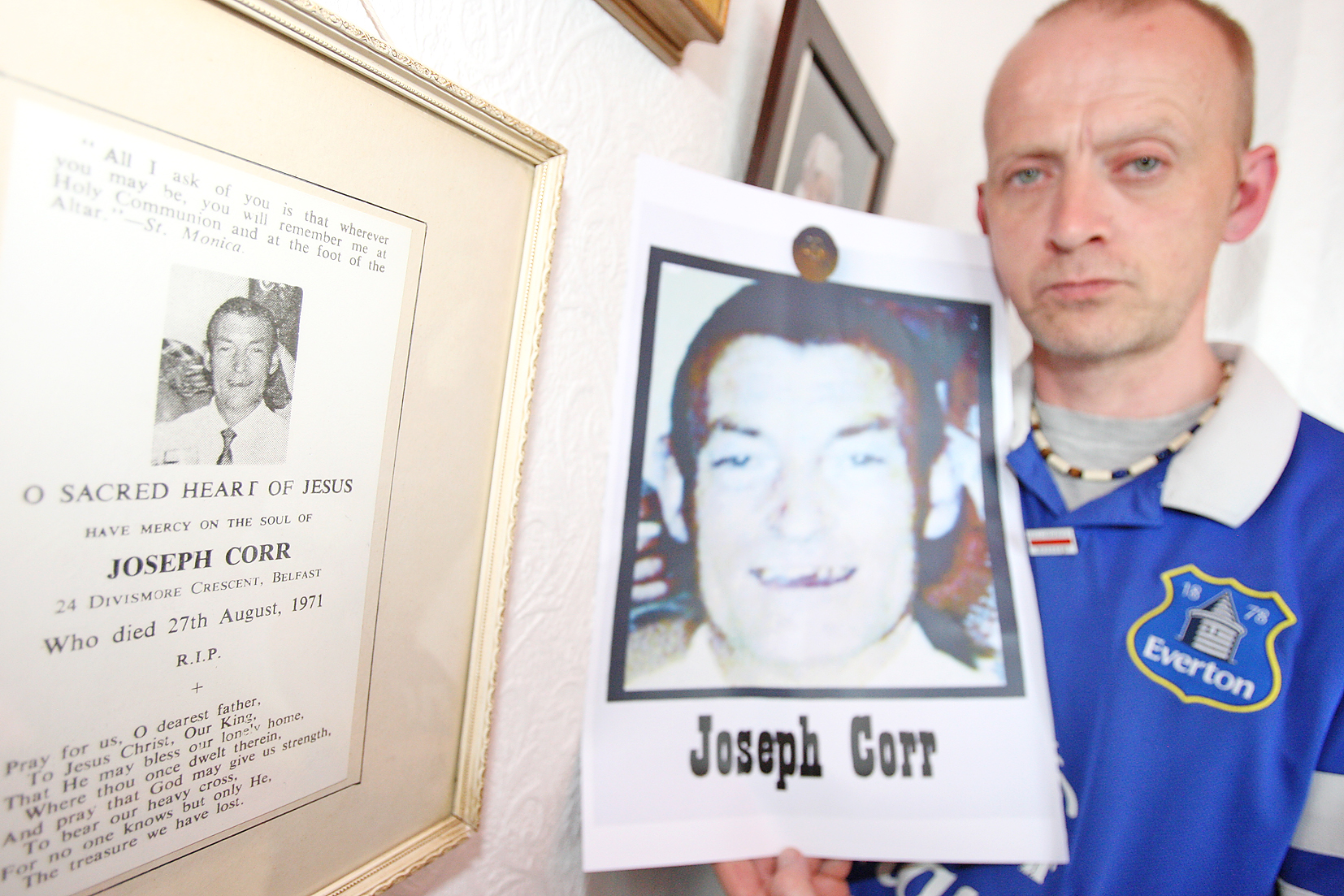 Mickey Corr with a picture of his grandad Joseph Corr, killed in the Ballymurphy Massacre. Mickey wants to get to the truth for his dying dad

THE grandson of one of the victims of the Ballymurphy Massacre has voiced his anger and frustration at First Minister Arlene Foster allegedly blocking funds for legacy inquests.

It’s claimed the DUP leader stopped a claim for legacy inquest funding from being discussed by the Stormont Executive.

Mickey Corr whose grandfather Joseph was shot along with 10 other innocent people in August 1971, was speaking after his own father, Joseph, who is 65 and affectionately known as ‘young Joseph’, was diagnosed with terminal cancer. Speaking to the Andersonstown News Mickey said: “I made my father a promise and I intend to keep it, I promised him that we would get the truth before he died. He has lived with this guilt all his life. When my granda was shot the place was chaos, in the midst of all the chaos my father stepped over his own father as he lay bleeding on the ground. He has always lived with the what-ifs?

“My father is dying from throat cancer. He needs answers and now Arlene Foster and the DUP have cut the funding for historical inquests. It’s not on, this guilt is being passed down from generation to generation, they keep cutting funding. If this was Arlene Foster’s grandfather would she still cut the funding? We just want someone to show a bit of decency and do the right thing for the families.”

Pádraig Ó Muirigh, solicitor for the Ballymurphy families, said: “The continuing delay in progressing the inquest into the deaths of those killed by the British army at Ballymurphy in August 1971 is a source of great frustration for the families.

“Despite the substantial efforts by the Lord Chief Justice and his office to move legacy inquests on, including the recent review of these cases by Judge Weir in January 2016, we still don’t have any adequate resources in place to enable the establishment of a Legacy Inquest Unit. Although a proposal from the Department of Justice that a bid should be submitted to the British Secretary of State for drawing down of funding for legacy inquest has been provided to the Executive, it has yet to be placed before an Executive meeting.

“However, that looks unlikely now given the current status of inquest funding. This is not positive news for many family members who are elderly or suffering from ill health, including Joseph Corr Jnr who is also an important witness for the forthcoming inquest. This delay is a continuing breach of Article 2 of the ECHR and yet again the British government is falling short of their international obligations to progress these inquest within a reasonable time period. The families will have no option but to seek redress to the High Court if this issue is not resolved in the near future.”

John Teggart, spokesman for the Ballymurphy Massacre families, said: “We have just heard the news that the DUP have blocked the progress of the 56 inquests into the deaths of 95 people. Recently, Arlene Foster refused a request from the families to meet. In that letter she hadn't the decency to inform the families of 11 innocent civilians that she was actually blocking the progress of their inquest.

“The families are furious, as will other victims families be, including the Springhill and Kingsmill families. We demand an explanation from Arlene Foster.”

Ms Foster said: “We will still have to come back to legacy issues and I don't underestimate how difficult that is because if you talk to 10 victims' groups, you get 10 different views of what they would want to see in terms of what they'd like to see for dealing with the past.”