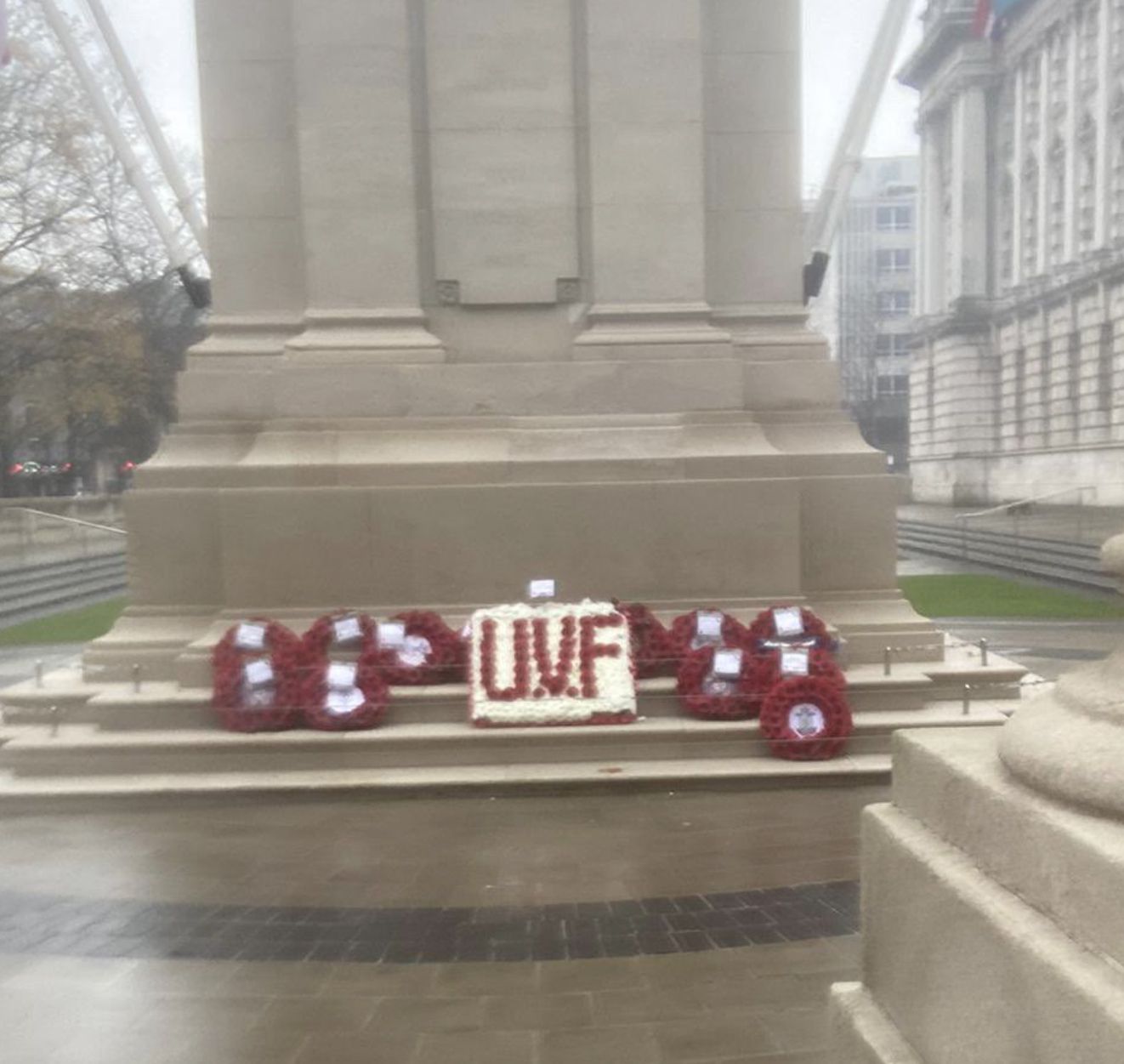 PROMINENT: The UVF wreath was at the Cenotaph during the official Belfast City Council ceremony

BELFAST City Council says its officials will meet with party group leaders this week to discuss the placing of a UVF wreath at the Cenotaph on Remembrance Sunday.

And quite a wreath it was, too, now being one of the only three things on Earth visible from the moon, alongside the Great Wall of China and Jamie Bryson’s bald spot.

Of course it’s right that moves are made to ensure that there’s no repeat next year and it is to be hoped that the promised discussions will ensure that that’s the case. But Squinter doesn’t think it’s a done deal by any means, because, let’s see now, what’s the best way to put this?... Well, unionism wasn’t a bit bothered by the wreath. There wasn’t a single person who advocates Our Precious Union® who spoke out to say that a tribute to an illegal loyalist paramilitary organisation has no place at official poppy commemorations.

Far from it. When the story went up online the stock response from the loyal side of the aisle is that the Ulster Volunteer Force fought in World War I and UVF members died in their thousands. That claim is what is known in Ulster-Scots as complete balls.

Which means that the UVF wreath should read 36th (Ulster) Division, which would not only be accurate, but would be much less offensive to the families of the many Catholics who were killed by the, ah, UVF.

One bloke got back to Squinter and observed: “Basic knowledge of history would know the correlation between the UVF and WWI. Putting the words ‘36th Ulster Division’ on the wreath is just a waste of money. Everyone knows which division is being remembered.”

The argument that getting a wreath made with 36th (Ulster) Division on it would be a waste of money is one that Squinter must admit to not having heard before, and if you view your solemn commemorations in the same way as you view getting your favourite footballer’s name on the back of a football shirt, then there’s a certain logic to it.

When they charge you per letter, ‘Messi’ is going to cost a lot less than ‘Vennegoor of Hesselink’ just as ‘UVF’ is going to cost a lot less than ‘36th (Ulster) Division’, even if you take away the brackets. Six times less, in fact. And in these straitened times every little counts, even when it comes to remembering the carnage of the Somme. But surely ‘36th’ on its own solve this little enigma. After all, it’s only two bit letters and two wee ones, which effectively adds up to three letters, same as ‘UVF’.

As well as pointing out that officials will be meeting the parties this week to discuss the matter, the Council also said the following: “The Cenotaph is a public area and around this time of the year, organisations and individuals also lay their own wreaths in remembrance. They were given the opportunity to do so yesterday, following the official ceremony, at specially allocated time slots, in accordance with public health guidelines. The placing of the wreath was not part of the official acts of remembrance organised by the Council.”

Which is all very well, but pictures in the newspapers from Remembrance Sunday show that the UVF wreath was in situ while the official ceremony was taking place. As the great and the good were arrayed in their ermine and medals at the front of the monument, the big UVF wreath was at the back with a clatter of other tributes whose messages couldn’t be read. And if the physical placing of the wreath was not performed by a mandated individual, the solemn ceremony took place with the wreath on the monument. And let’s be honest here: the letters UVF were not hard to see.

You’d think somebody would have taken a wee dander around the Cenotaph before the clock struck eleven to ensure that things like this don’t happen. Maybe next year.
Or maybe not.

Christmas in the high rise

THE seasonal fox that is Die Hard has been set running, and this year it’s the fault of Radio Ulster Talkback presenter William, who raised the annual question of whether in fact the action thriller can be deemed a Christmas movie, as it is by most film fans.

Squinter’s in the minority here as, to him, it’s about as Christmassy as a wet weekend in Millisle. So just what is it about a film involving a terrorist takeover of a high-rise building that makes people think of snow and carols and Santa and reindeer?

Well, the action is set on Christmas Eve where a Christmas party is being held by a Japanese multinational company in their skyscraper headquarters in New York. NYPD man John McClane (Bruce Willis) heads to the party in an attempt to make up with his estranged wife, who’s called… Holly (Bonnie Bedelia). So far, so what?

Some Christmas tunes play in the background during the party and there’s an occasional reference to the festive season (McClane writes ‘Ho, ho, ho’ on the body of one of his victims). And that’s about it.

That’s a tenuous festive link, if the truth be told, but Squinter pointing that out won’t change the fact that Die Hard is up there on the Christmas viewing list alongside It’s a Wonderful Life, Miracle on 34th Street and A Christmas Carol.

But how come another classic action thriller is never part of the Christmas movies compilation? Squinter speaks, of course, of the 1987 film Lethal Weapon, which, in the opinion of this amateur movie buff, has Christmas credentials that Die Hard (made just a year later) can only dream of.

The dramatic opening scene of an apparent suicide from a high-rise building is accompanied by Jingle Bell Rock, and while that jaunty festive tune is not normally heard in a context quite as dark, the Christmas locus is firmly established. Chuck into the movie soundtrack ‘I’ll Be Home for Christmas’, ‘Silent Night’, ‘Jingle Bells’ and ‘The First Noel’ and you’re deep into Santa’s grotto.

Then there’s the traditional tale of Christmas redemption. Just as Ebeneezer Scrooge is reunited with his fellow man at the end A Christmas Carol, just as George Bailey in It’s a Wonderful Life goes from jumping off a bridge to finding contentment in the bosom of his family and neighbours, so Martin Riggs (Mel Gibson) progresses from the brink of suicide in a trailer to warm embrace of his partner’s family (even handing over the bullet he’s been keeping to kill himself with).

And to put the topping on the Christmas cake, there’s a shoot-out in a yard where Christmas trees are being sold. If dodging bullets by hiding behind Norway spruces isn’t more Christmassy than anything that took place in Nakatomi Plaza, then Squinter’s early years as the Andytown News’ film reviewer meant nothing.

No matter, since we all love a wee quiz at Christmas, here’s a bit of Die Hard trivia that will have your guests oohing in admiration, whether they’re in the room with you or on Zoom.
Die Hard is based on the book Nothing Lasts Forever, by Roderick Thorp. That book was a sequel to The Detective, which was also made into a film (of the same name, 1968) and which starred Frank Sinatra. As part of his contract, Sinatra was given first refusal on the lead role in any sequel to The Detective, and so when Die Hard was being cast, Sinatra, at the age of 73, was offered the all-action role of John McClane. Naturally, he turned it down (the necessary financial inducements having been made).

Tragically, we are left to imagine how Die Hard would have turned out if Sinatra had insisted on pulling on that dirty vest.

My mulled wine was a hit but my pouring left a lot to be desired... pic.twitter.com/P95DYuS0Er

IT’S been an article of faith for fifty years now that the Alliance Party are the David Attenborough of Irish politics. Everybody loves them; they’re like the dear old grandpa everybody wishes they had.

Down the middle of the road they continue to motor, stopping every now and then when they see a fence they’d quite like to sit upon. Where DUP meetings start with prayers, you picture Alliance Party meetings starting with an acoustic guitar Kumbaya singalong.

Key to this pussy cat image is their utter rejection of violence, which we know about because every time a party member speaks you’re once again reminded of it. Those who choose to can ignore the fact that the party supported the RUC and the UDR throughout the conflict, even though the behaviour of those unionist militias was so egregious that they were both dumped because peace was simply impossible while they existed. And those who choose to can also whistle and walk on when they are reminded of the fact that the party
voted in favour of bombing Iraq in 2014. You want to complain about your neighbour’s dirty windows you better have a very decent chamois.

There’s cynicism to be found everywhere in politics, of course, but when a reputation is founded on not being cynical, the cynicism, when it raises its head, seems that much harder to take.

It’s not the RUC, the UDR or even the more recent Iraq episode that’s been occupying Squinter of late, it’s the Alliance Party’s position on last week’s Executive lockdown debacle that has really had him shaking his head.

The facts are fairly straightforward. The DUP doesn’t like lockdown. Nobody likes lockdown, needless to say, but the DUP dislikes it so much that they’re unwilling to take the difficult decisions that need to be taken at a time when the Covid numbers are going through the roof here (a death toll four times higher than the Republic’s).

It’s to do with money, you’ll not be surprised to hear, because whenever you hear the words DUP and controversy in the same sentence you can be sure that moolah is involved somewhere.

The Chief Medical Officer Michael McBride and Health Minister Robin Swann (UUP) recommended that the four-week circuit-breaker lockdown that’s just ended be extended by a fortnight in response to the worrying Covid figures. His party, Sinn Féin, the SDLP and Alliance agreed. The DUP rejected the plan, using a blunt veto instrument to block it not once, but twice.

That shameful behaviour rightly drew criticism from far and wide, but rather than call out the DUP, thus totally isolating and exposing the DUP, the Alliance Party did what they do best: they went down the one’s-as-bad-as-the-other route.

The fig leaf this time for another disappointingly familiar cop-out was that SF northern leader Michelle O’Neill had said on TV on Sunday that the Executive was considering a number of options in its discussions on any lockdown extension. A standard non-commital response, but when the DUP in their attempts to deflect criticism latched on to it like a drowning man to a buoy, Alliance were only too happy to go along with it.

In other words, given the chance to strong-arm the DUP into doing the right thing by calling them out on their shabby behaviour, Alliance decided instead that the chance of positioning themselves again as the exasperated schoolteacher dealing with unruly schoolchildren was too good to pass up. Even when one schoolkid is wrecking the classroom and all the others are sitting at their desks watching. Which was one of the reasons that the DUP felt emboldened to execute that outrageous second veto.

Which means that Alliance are as much a part of the Stormont mess as any other party. And at this stage we can all agree that it is a mess.  Been that way for 100 years.