OPINION: 100 years on, just what is there to celebrate? 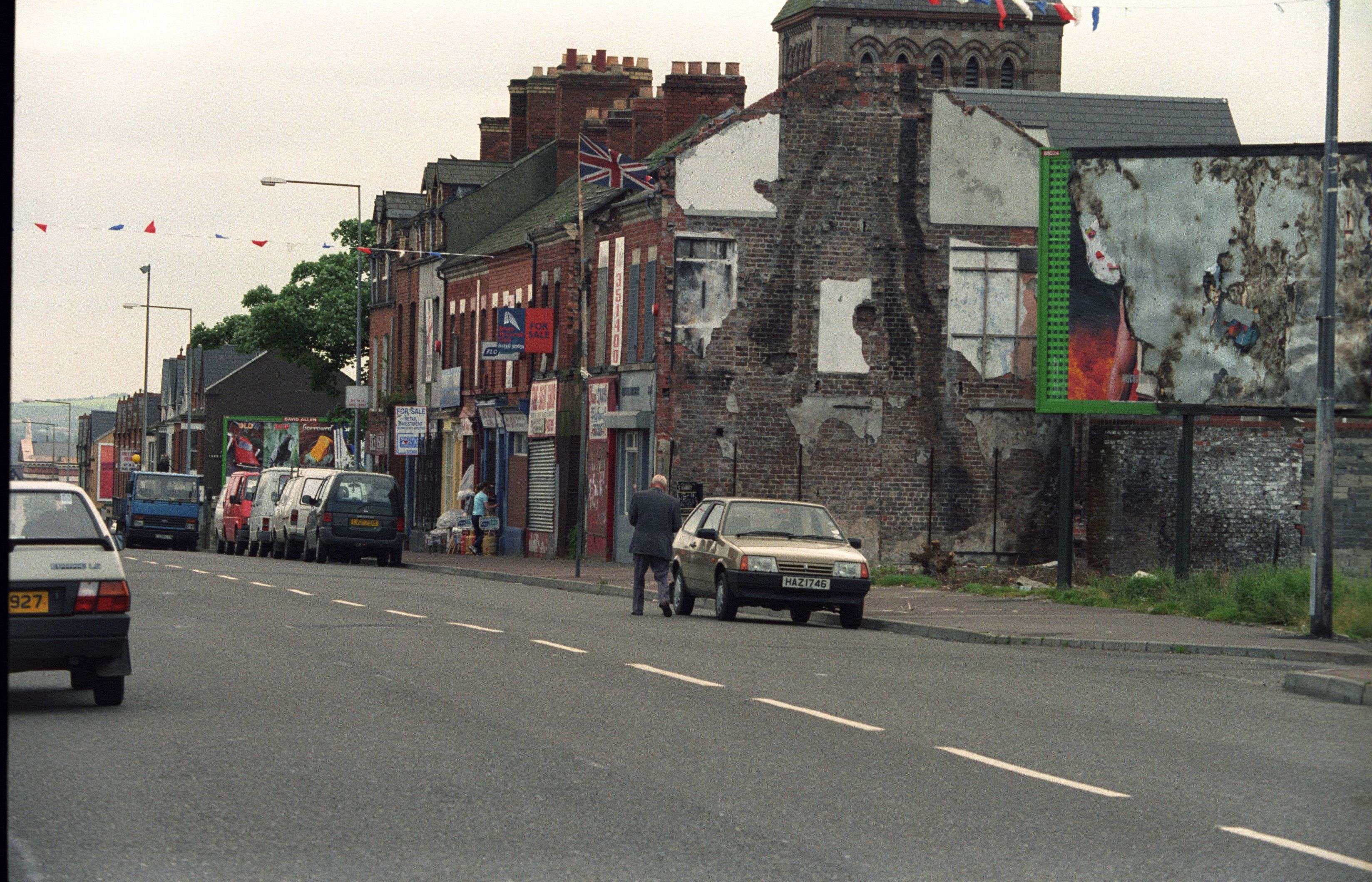 SO MUCH TO CELEBRATE: A depressed Crumlin Road, Belfast, 1997.

Tempting, but no, as Anna Scott replies to Rufus when he asks for her phone number in Notting Hill. Tempting to get stuck into the internal politics of the DUP, but no. Tempting to look at the significance of homophobia and creationism for the future of unionism, but no. Tempting to speculate on why unionists and loyalists, who are not really Unionists and Loyalists, retain their ‘bread and butter’ faith in the union. But no.

It is, however, hard to avoid reflecting on the centenary of the creation of Northern Ireland – this week especially. But how should 100 years of this entity be marked, if at all? Very few seem to see it as an occasion for celebration. Perhaps the DUP will quickly resolve its present difficulties and step forward with a convincing list of reasons to be cheerful. This will obviously include – sarcasm alert – 50 years of the Special Powers Act, 30 years of Direct Rule, or recent policy high points such as RHI and Brexit.

It is improbable that the DUP will get too drawn into listing positives. For a start, it was born to say ‘no’ and, especially, ‘never’. Remember, this is not just the anniversary of partition and Northern Ireland’s painful and bloody birth. It is the fiftieth anniversary of the founding of the DUP itself (in September). How will the party be celebrating? More to the point, what is there to celebrate?

Northern Ireland's centenary:
Hasn't trended on Twitter.
The Queen, wearing emerald green on the BBC website, referred guardedly to our 'complex history.'
Boris merely called it a moment of 'shared reflection.'
No refs to 'our precious Union/ 4 nations.'https://t.co/qiXULETRUZ

Last Saturday, May Day no less, the News Letter published a 32-page special souvenir supplement, “Celebrating 100 years of Northern Ireland”, but no significance should be attached to the number of pages. Don’t envy the picture editor for having to choose how to represent a century of history from the archives. There was space for 73 photos, some of which were of workers: ‘herring girls’ at Ardglass, men at Belleek Pottery and half a dozen pictures of wartime work from 1941.

Most of the pictures are from the first fifty years of partition. The only sign of the border as such is “a spiked road” between Newry and Carlingford where a bus has stopped before a line of steel posts. A women, accompanied by a bus driver and conductor, is pictured walking between the posts presumably to pick up another bus on the other side. How unfettered.

This is a contented Northern Ireland with barely a hint of trouble. The laying of the foundation stone of Parliament Buildings 1928. Cattle and horses, the Spring Show at Balmoral, diners at the Carlton restaurant, doctors with microscopes at the RVH pre-NHS, all from the 1930s. No sign of mass unemployment, hunger or outdoor relief struggles.

There is a picture of people assembled at Stormont for the Queen Mother’s visit in 1958. Otherwise, royalty are absent, except for King Billy riding through the crowd at Carrickfergus Castle in 1969. There are pipe bands at Belfast City Hall in 1980, a men’s hockey team from 1988 and Orangemen marching in 1987. And see the four smiling RUC officers who have captured a poteen still in 1958 and obviously taken a sip or two. But wait a moment, why is that building in the background covered in sandbags?

the Government of Ireland Act came into force to establish Northern Ireland. We reflect on how much we have achieved for such a ‘wee’ country and look forward realising our full potential throughout the next century. #NI100 #UlsterUnionist pic.twitter.com/9bF2BqdMIr

What’s this about an armed guard of B-Specials surrounding a branch of the Belfast Bank in Strabane from 1922? Those Specials can be seen again, this time in 1955, being inspected by a man in a top hat. The one coloured photo in the whole collection is of an anxious looking British soldier from the Queen’s Regiment “on duty beside a barricade in the Falls Road area”. Less a barricade and more a mass of barbed wire coils, behind which is red, white and blue bunting.

What a surprise to see a close-up of Mrs Thatcher with a few soldiers from the Royal Artillery, given her ‘sell-out’ over the Anglo-Irish Agreement in 1985. But this is 1981, March 1981.

There are a few articles alongside the pictures which suggest all was not well. There is a piece headlined, 'Driving out the invaders', describing efforts by British troops and the Ulster Special Constabulary “to drive the Sinn Féin forces out of the Belleek sector of Co Fermanagh” in the summer of 1922. Also, a report on the 1950s split in Presbyterianism: Ian Paisley conducting the opening service of Crossgar Free Presbyterian Church and preaching the infallibility of the Word of God, which the ‘modernisers’ of the Irish Presbyterian Church had lost sight of.

Nearly half the supplement consists of advertisements, ranging from the UDR benevolent fund to the Royal Black Institution and suppliers of band instruments and uniforms. The TUV has a full page quoting Carson, and the UUP wants us “to build a vision of how we can make Northern Ireland a world leader”. Mid & East Antrim Borough Council sponsored two full pages and the only other council represented is Armagh City Banbridge & Craigavon with a modest quarter page.

One of the more interesting advertisements is from the Ulster-Scots Agency which describes the birth of Northern Ireland as an expression of the right to self-determination of Scottish and English settlers, seen as ethnically distinct from “the Irish”: “when world leaders recognised the right to self-determination for small nations like the Irish, it was clear the Ulster-Scots people would have the same right. The foundation of Northern Ireland in 1921 recognised this.”

Such a racialised take on partition is just nonsense. Carson would be turning in his grave: the political economy points to class interests pitched against political emancipation. Unionist leaders armed and mobilised 84,000 ulster volunteers, prepared to fight the British in order to remain British. Elements within the British Army refused to take them on – the ‘Curragh mutiny’. To protect their interests in the markets of the British empire, big house unionism mobilised against Irish nationalists whose aspirations for modest home rule had been frustrated by the Westminster parliament for decades.

The Queen marks centenary of Northern Ireland with tribute to people and peacehttps://t.co/1CzJdTTU04

The DUP’s contribution to the supplement is to resurrect a slogan from a couple of years ago: #thisUnionworks. What’s the evidence for this? “Whether through our NHS, as one of the world’s largest economies or in our Armed Forces it is clear #thisUnionworks.”

There’s an air of insecurity about this assertion, especially when, as a party, you are also complaining that #thisUniondoesn’twork because of the Irish sea border checks that you helped to engineer. Something of a credibility gap there. Nevertheless, here, at least, is a thumbnail sketch of the pro-union proposition in 2021. It does not exactly make the case for why a monarchy is better than a republic, why “the UK has cricketing metaphors where a written constitution ought to be” (Aditya Chakrabortty), why first-past-the-post is better than proportional representation, why a second chamber crammed full of inherited titles and political appointees is preferrable to an elected Seanad, or why unionists no longer taunt the South with “the great benefits of our social legislation”, as they were inclined to do when de Valera called for a united Ireland after the introduction of Bunreacht na hÉireann. But it’s a start.

The News Letter’s special supplement demonstrates that it is only possible to celebrate Northern Ireland by taking an overdose of selective amnesia and selective nostalgia. It can only be done, it seems, by excluding the diversity of peoples and histories that make up this place. If you cannot be honest about the past, even the recent past, you can’t begin to be constructive about the future. 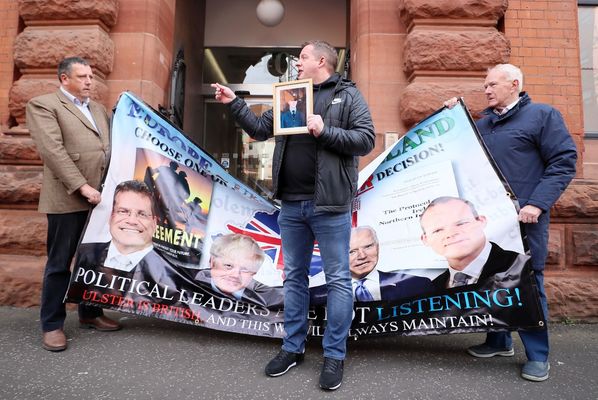 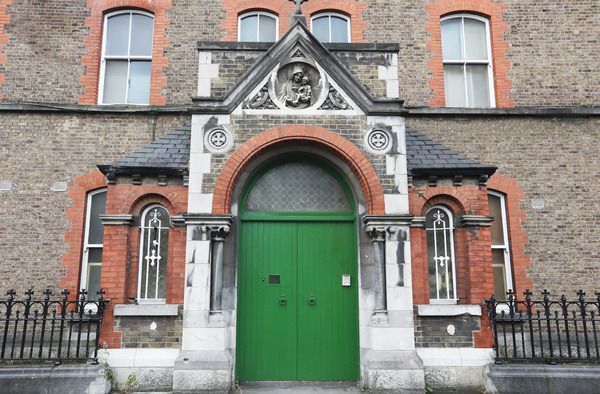 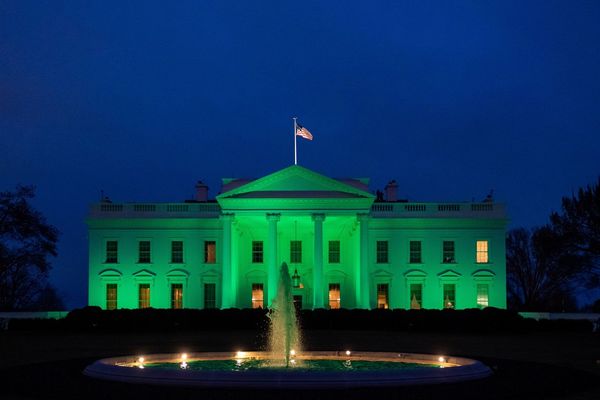