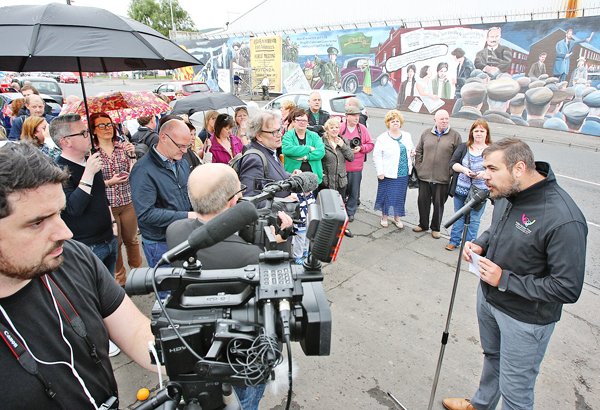 SHOWCASE: Harry Connolly from Fáilte Feirste Thiar speaking at the unveiling of the 1916 mural at the International Wall

A NEW Easter 1916 mural on the International Wall on the Falls Road was unveiled yesterday (Wednesday). The mural, which was painted by well known artist Danny Devenny and a team of international muralists, depicts a Belfast narrative of the Rising.

Tom Hartley, Chair of the 2016 Committee, said: “When we started to organise events for this historic year we decided that our efforts would focus on the Belfast connection to 1916 and that we would tell the story of those individuals who helped create that connection.

“Murals in the republican community emerged in 1981 during the hunger strike. I always think the mural is the colour of the creativity inside us which is a move against the greyness of society that was imposed upon us.”

Harry Connolly of Fáilte Feirste Thiar said: “Today we launch our 1916 narrative mural at this iconic location, the International Wall. I want to commend the legend that is Danny Devenny. Despite futile attempts at crude censorship  towards Danny and his team, they have continued the work they’ve been doing for over thirty years. I want to welcome you all here on this the 100th anniversary of a great Antrim Gael and a leader of 1916, Roger Casement. I especially wish to welcome the families of Winnie Carney, Charlie Monaghan, the Corr family and those campaigners from Moore Street who have traveled from Dublin to be here today.”

Speaking before the event Harry said: “It is our job here at Fáilte Feirste to promote tourism in Belfast, we’ve been working in conjunction with local artists for the past few years to promote and develop murals as a tourist attraction. The International Wall is the single biggest tourist attraction in the city.

“The mural has been designed to tell the story of Belfast and its connection to the historic and revolutionary period of 1916. It’s all about showcasing to the world and to visitors and locals alike is that 1916 Rising isn’t something that just happened in Dublin. Belfast was a hotbed of political activity in the years leading to the Rising.

“We have taken the entire wall and this is a huge deal because of its prominence as a tourist attraction. From our perspective we are delighted to complete the work and look forward to welcoming millions of tourists to it. We plan to leave the mural there for a year and then for the International Wall to go back to what it always was.”

He added: “It’s another momentous day for West Belfast tourism, as we move into the later part of the year and launch this as the beginning of Féile an Phobail.”

Danny Devenny gathered a team of local, national and international artists from Belfast, Liverpool, Boston, San Diego, Cork, Dublin, Galway and Derry to work on the mural. Speaking after the unveiling Danny said: “We were asked to create a mural in an effort to create debate and discussion on the centenary of the Rising, but from a Belfast point of view.

“ I found to my enjoyment just how interesting these stories are to tell. It became a journey for me, it’s been a real joy to do. The mural is dedicated to the memory of Seany McVeigh who passed away recently.”

Also at the mural unveiling was Senator Niall Ó Donnghaile, who said: “What better way to tell our history than through creativity and showcasing our abilities? The International Wall and the artists who use it and utilise it are a proper showcase of that.”