OPINION: Time for another ethnic face to light up hallowed halls of Stormont 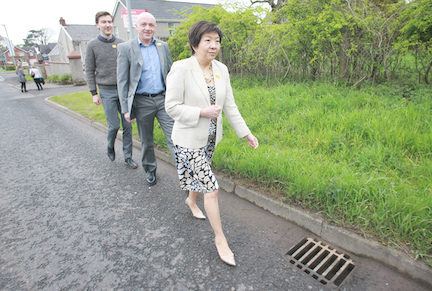 EQUALITY BATTLER: Anna Lo pictured campaigning for the European election in 2014
ONE day, and I hope not too far away from today, another uninvited intruder will enlist him or herself in the hallowed corridors of power at Stormont.

The last time an ethnic face featured in that place on the hill was  former Belfast South MLA Anna Lo.

Remember, the reason Ms Lo made an exit from mainstream politics is the same reason many non-born-here citizens will not take the risk. Lo called it unmitigated racism.

Even the President of the highest office in the world, Barack Obama, had to remind a heckler in the White House that he was doing so in his home and he should stop it. What followed were racially charged comments from the right-wing press and we-don’t-do-black brigades of the social media.

It is time we tolerated each other.

The word tolerant is a disservice, though, it nearly means a token, piecemeal – not enough. Some people actually sing more praises to and for a dead person than when they were alive. This is across the board. Covid has denied us that special right to say what we want, the tears of sadness and joy, to celebrate the dead completely.

Let me tell you about the funeral package back home (yes, that one). My US-based Kenyan expatriate, the author Washington Osiro, wrote in his biography that a Luo funeral – yes, Luo because the whole cultural event is owned by our ‘tribe’ and is a week-long mosh pit of food and drink offered to any and all.

He noted that “friends, families and complete strangers freely intermingled with one another. Several animals  – bulls, goats, sheep and chicken (in no  particular order, I add) – were slaughtered to feed the multitude of funeral attendees.” Many come to these funerals on empty stomachs  (well, one meal a day if they are lucky). We are talking about rural communities.

Keeping with burial traditions among the Luo community and thousands of other tribes across Africa, the body of the dead person must be interred in the grounds of their home, mostly paternal.

These are some of the interesting features of a Luo funeral: death of course; the vigil (budho); grave digging (kunyo; and burial(iko). Accompanying the spirit of the deceased to the former battleground (tero buru matin), shaving (liedo), dividing articles left by the dead (keyo nyinyo) and remembrance (rapar). There are more contents to the funeral experience that have been dealt a blow by covid around the world.

Not every cultural experience is heavenly, so to speak.