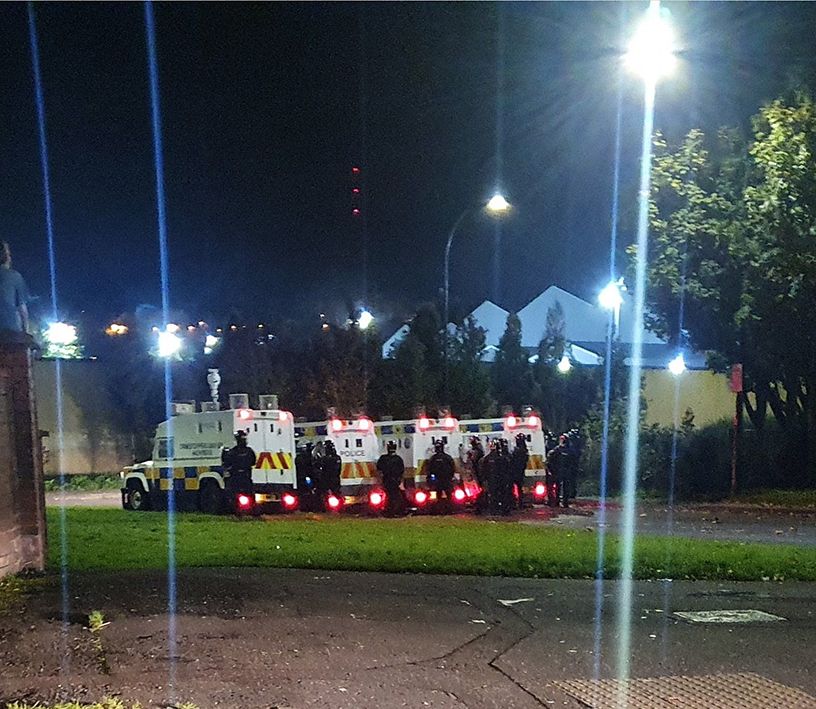 FLASHPOINT: Violence such as that at Lanark Way was short-lived and rejected by the vast majority

This time last year the DUP was in the middle of its nervous breakdown, ousting Arlene Foster, electing Edwin Poots, ousting Poots and anointing Jeffrey Donaldson. Simultaneously Michelle O’Neill became the de facto First Minister as poor old Paul Givan was shoved into the First Minister role that neither new leader wanted. Which now seems kind of strange given the way the election debate has unfolded and the DUP’s focus on Sinn Féin achieving that very role.

Violence hit the streets as the rhetoric on the Protocol ratcheted up. But the violence was quickly dealt with and ordinary people gave it short shrift. Any allegations that there are fever pitch tensions were quickly disproved as young people did not join in and went about their business.

Protocol marches on Friday nights were mooted as being the sign of Carson’s second coming. It turns out it was only the second coming of weird fringe English Brexiteers and wannabe cowboys and no momentum came from it.

The context could have led us to believe that the election campaign would be a bit of a nightmare, but it wasn’t to be. Political unionism continued to get media attention and concerns regarding the Brexit Protocol were inflated to epic proportions. However, all of the opinion polls demonstrated that much of that media was missing the electorate’s emphasis.

.@Peston: Are you pursuing plans to give you powers to waive elements of the NI protocol?@BrandonLewis: No Robert we’ve not said that

NI Secretary signals govt have pulled back from including plans allowing them to suspend parts of the Protocol in the Queen’s Speech#Peston pic.twitter.com/9o9EmsgOjQ

A new Executive is now possible. One based on consensus, commitment to previous agreements and commitment to human rights. The electorate know it and are sending that message. The majority of people want functioning government with whoever wins having the right to hold ministerial offices.

The new Executive will potentially be best placed to tackle the challenges and storms that will come this year whether it is responding to the cost of living crisis or the health crisis. But that destiny does not lie solely in their own hands. We saw during the pandemic the restricted ability of the Assembly to move quickly to respond to local needs as Westminster still holds so much control. And there’s the rub. Unionism will be smarting and unionism will seek balm from London. London is a bad faith actor who cannot be relied on as this storm brews.

If waiting lists continue to grow and our citizens fall into the despair of ruinous poverty and unionism continues to mess around in the months to come, they will prove that the northern state is simply ungovernable. This will in turn feed exactly what unionism is trying to avoid – the inevitable conclusion that only constitutional change will ensure that our votes can have equal value and that the people can be in control of their own destiny.